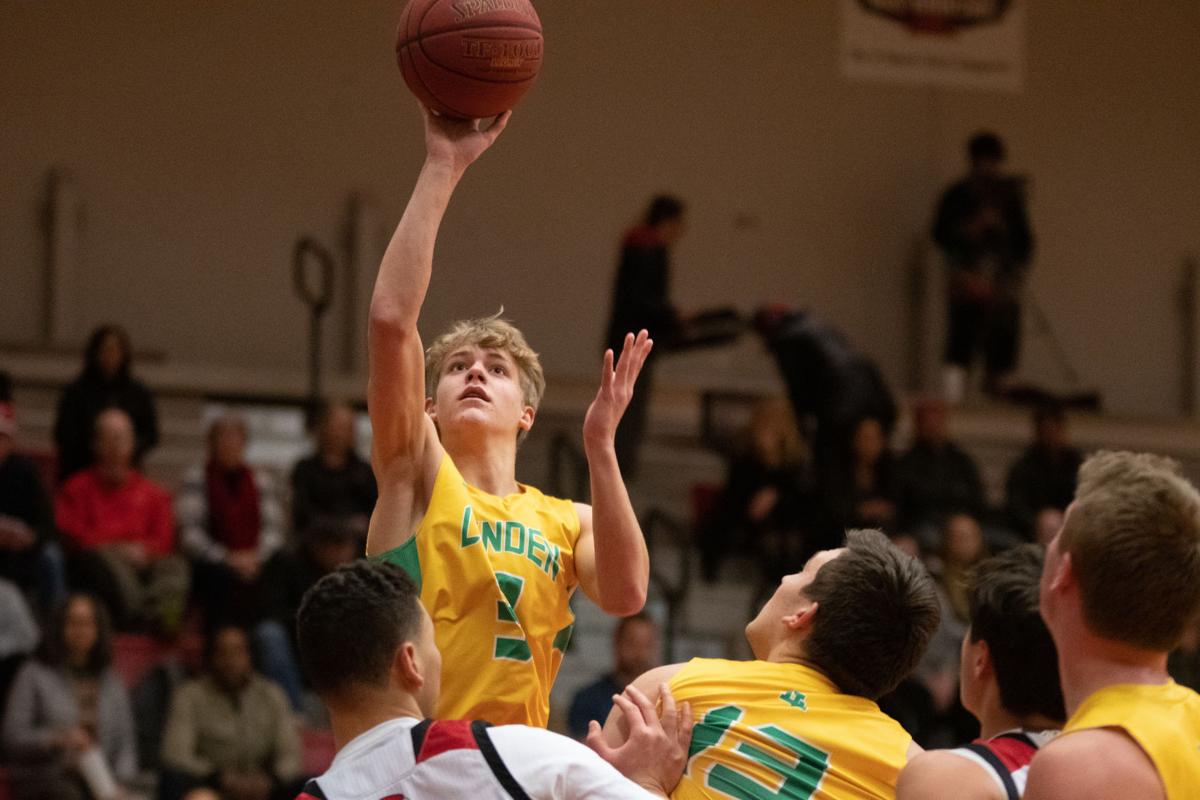 Lynden junior Koby Whitman scored 14 points off the bench on 88 percent shooting, while dishing out four assists and grabbing four rebounds, to help the Lions to a 97-57 win over Bellingham Wednesday. (Eric Trent/Lynden Tribune) 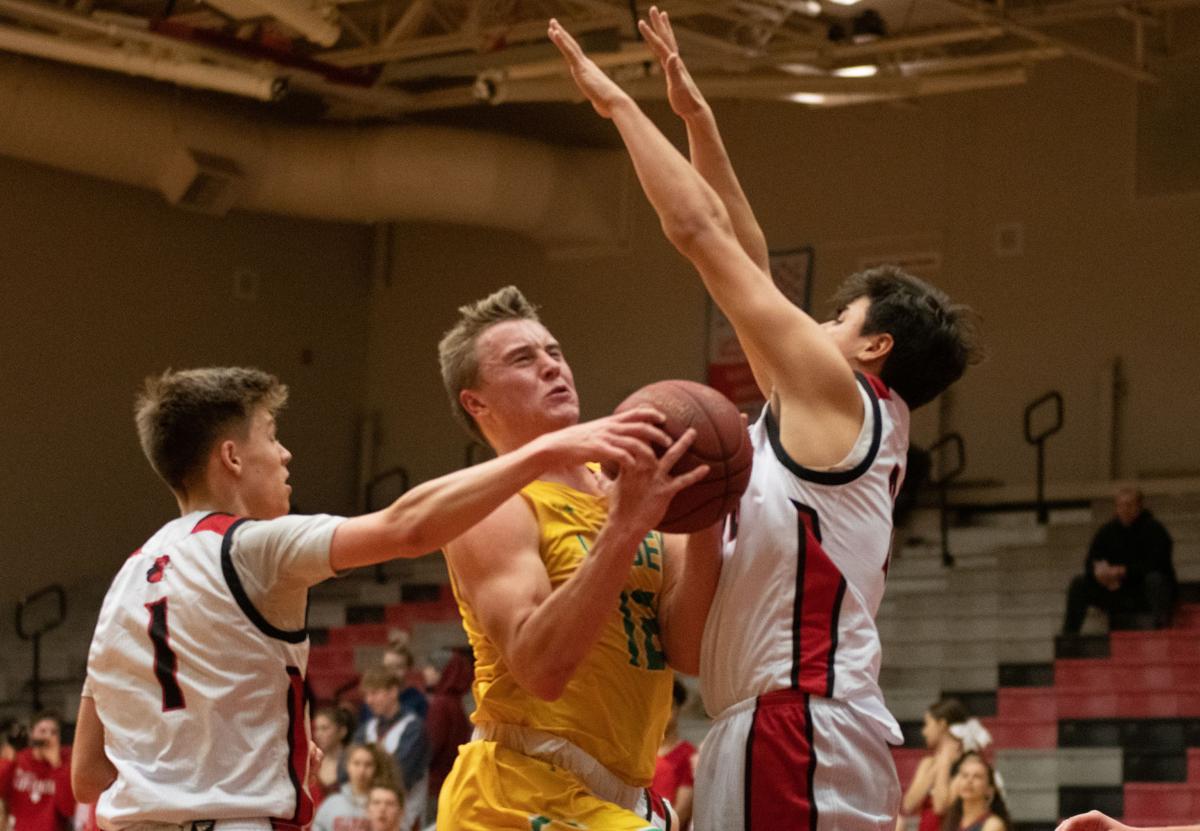 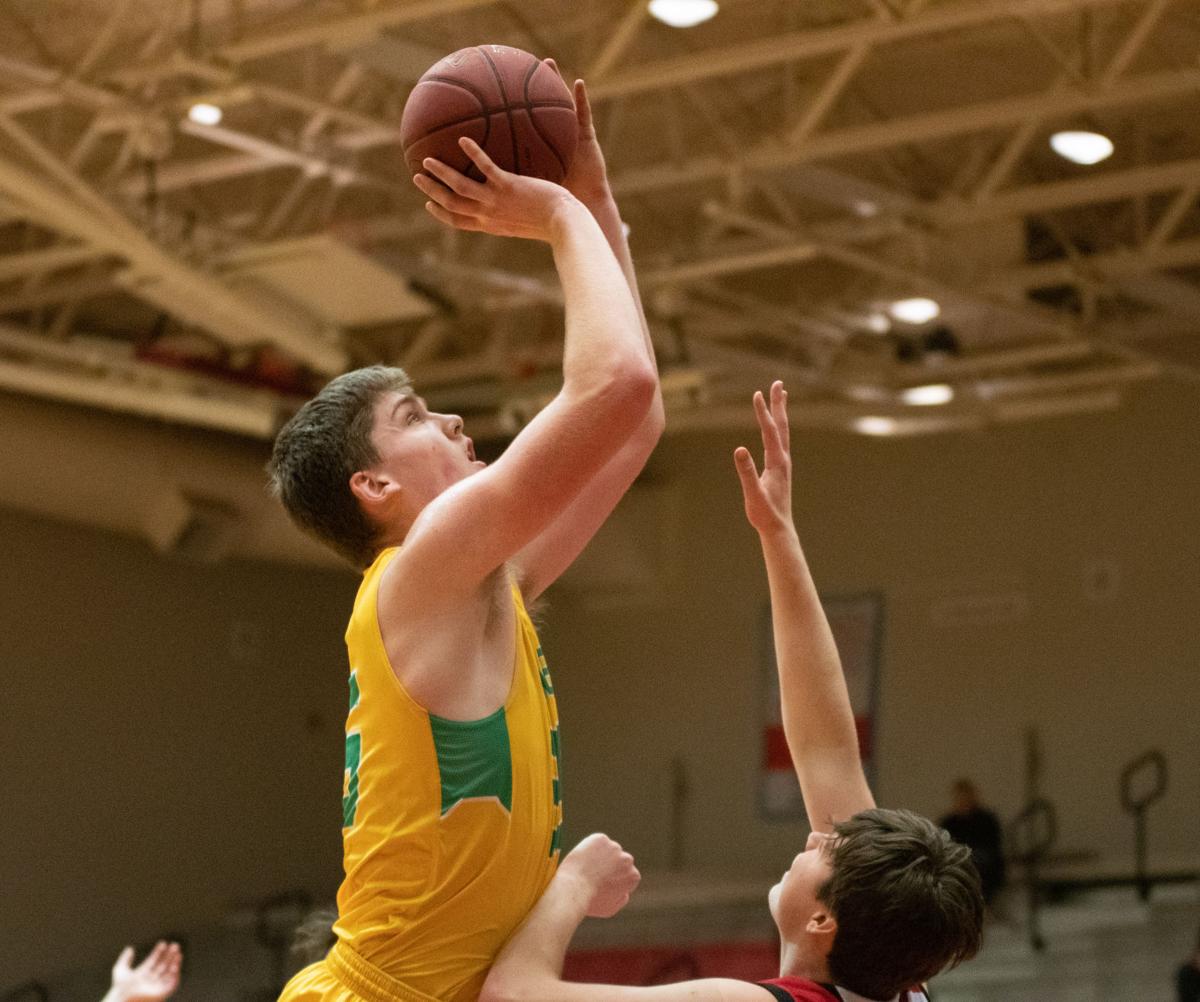 Lynden junior Liam Haneburg scored 20 points on 10-of-14 shooting while pulling down nine boards to help the Lions to a 97-57 win over Bellingham Wednesday. (Eric Trent/Lynden Tribune) 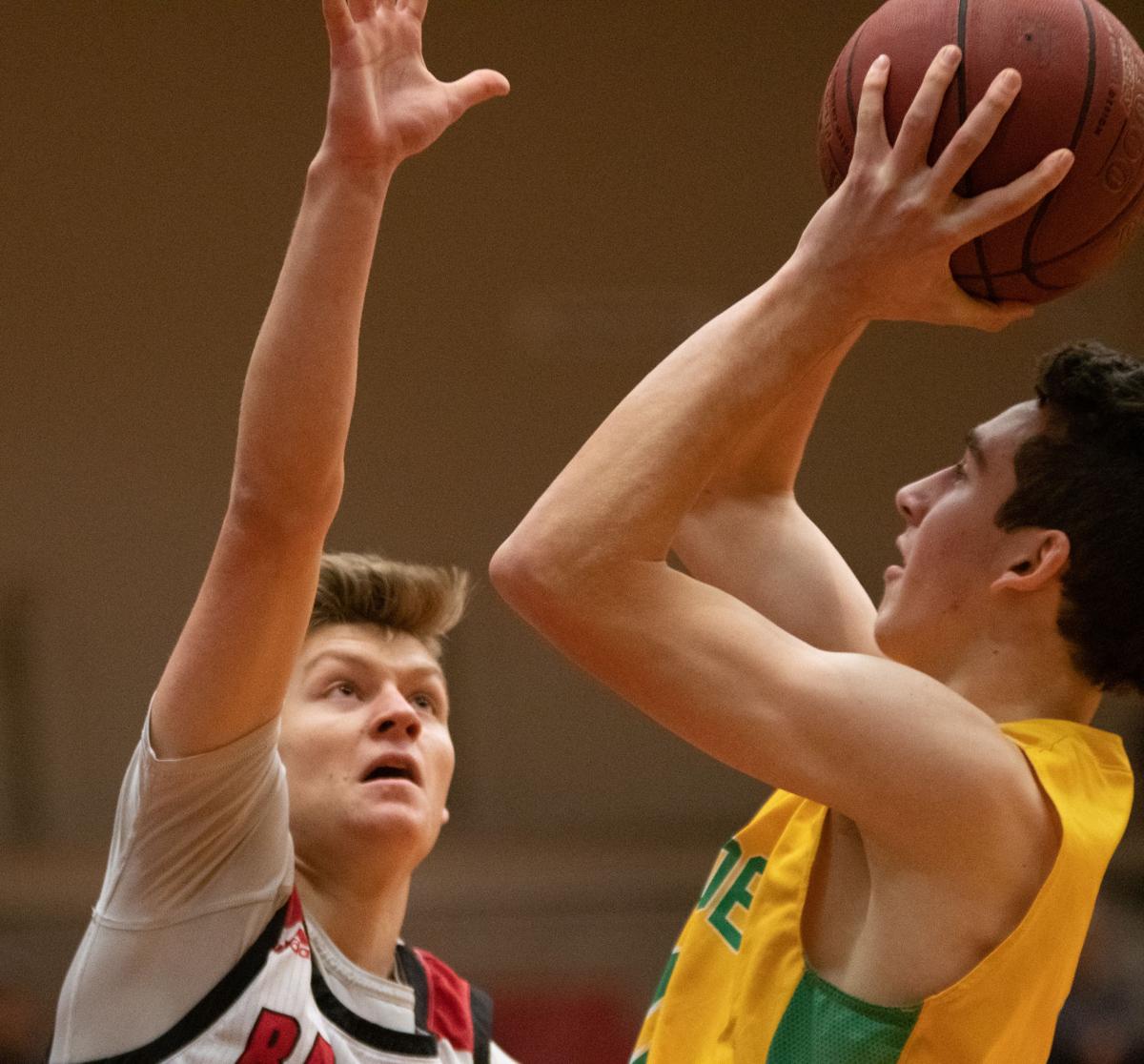 Lynden sophomore Jordan Medcalf rises for two of his 19 points in the Lions' 97-57 win over Bellingham Wednesday. (Eric Trent/Lynden Tribune) 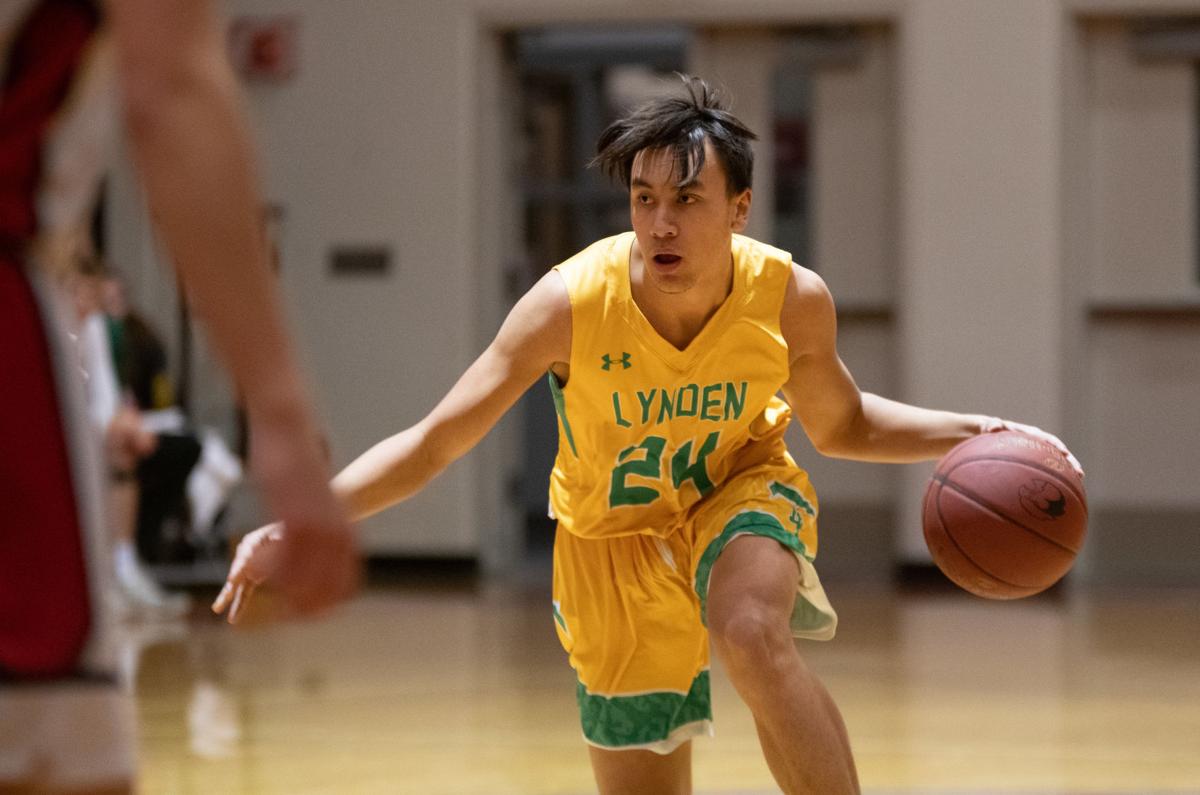 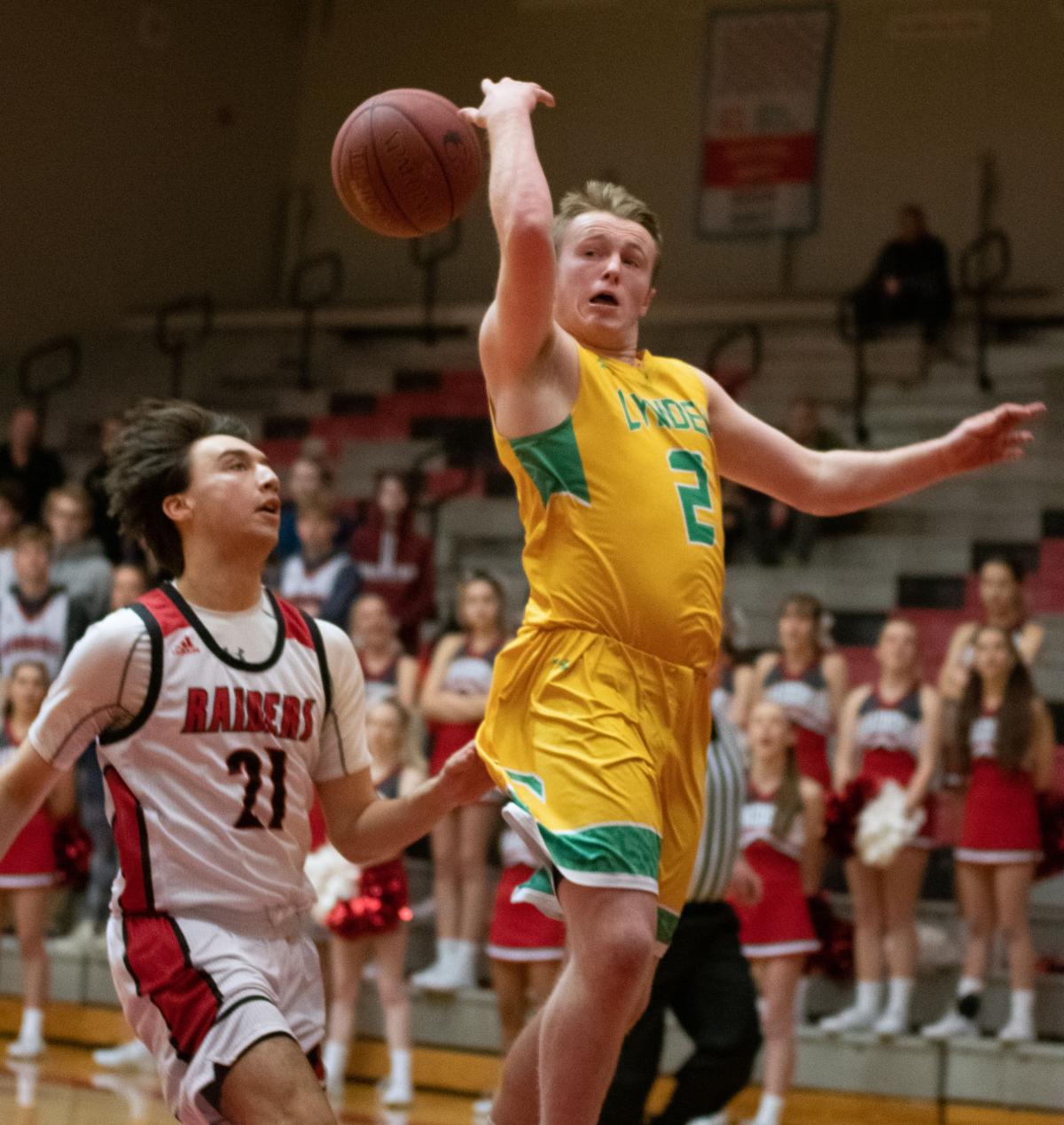 BELLINGHAM — It was clear from the get-go Wednesday night — and really for the last month — that few teams are equipped to handle Lynden’s frontcourt.

“Just grinded it out,” said Lynden junior Koby Whitman, who scored 14 points off the bench. “We let them score a few more points than we would have liked, but it’s all good. We got the win.”

Heppner and Hanenburg, the only returning varsity players for the two-time defending Class 2A state champs, made mincemeat of a beleaguered Red Raiders’ frontcourt, helping the Lions to a 35-15 rebound margin.

The Lions shot a blistering 62 percent from the field with Hanenburg knocking down 10-of-14 while pulling down nine boards. Heppner was even better, drilling 10 of his 13 shots, while dishing out five assists and grabbing four rebounds.

Only one team has had an answer for the Lions’ post play, and most notably their 6-foot-10 tower Hanenburg. That was 3A’s top-ranked Gig Harbor in the season opener when the Lions were still finding their identity.

Well, they’ve found it, ripping off nine straight wins, averaging 71 points per game during that stretch while allowing just one opponent to score more than 58.

It’s an impressive run for a team few picked to be sitting atop the Northwest Conference 10 games into the season; one that lost all five starters, including 10 players in all, and is now made up of 10 first-time varsity ballers.

“It’s a whole new team,” Whitman said. “No one would have thought, right?”

The early-season success hasn’t all been on Hanenburg and Heppner. With so much senior talent taking all the varsity spots on last year’s squad, the junior varsity was loaded with gifted underclassmen.

“On JV we subbed five every time because we were so equally [talented] as a team,” Whitman said. “That definitely helped us to get to where we’re at now. We’re such a well-balanced team.”

And now those underclassmen are getting their chance to shine.

Sophomore starting small forward Jordan Medcalf dropped 19 points Wednesday on a blazing 8-of-12 shooting from the field. Whitman was a scorching 88 percent on his 14 points.

It’s been like that all 10 games so far, with the newcomers stepping up in all phases of the game.

Whitman attributes the success to the team chemistry that was built while playing junior varsity together last season.

“Going up with these guys has been crazy,” Whitman said. “We’ve built up a family over the past three years and it’s a blessing.”

Lynden will look to keep its win streak going at 7:15 p.m. Friday when it hosts Sehome (4-6, 2-2 NWC) in the Lions’ Hall of Fame game. Former boys basketball player Shawn Bovenkamp and former golf coach Russ Door are being inducted into the Lynden athletics Hall of Fame.

Scores from around the league

Ferndale's Jamie Johnson scored 13 and the Golden Eagles have now lost three out of its last five. They travel to Burlington (8-2, 3-1 NWC) for a 7:15 p.m. matchup on Friday.

Sehome next travels to Lynden on Friday for a 7:15 p.m. matchup.