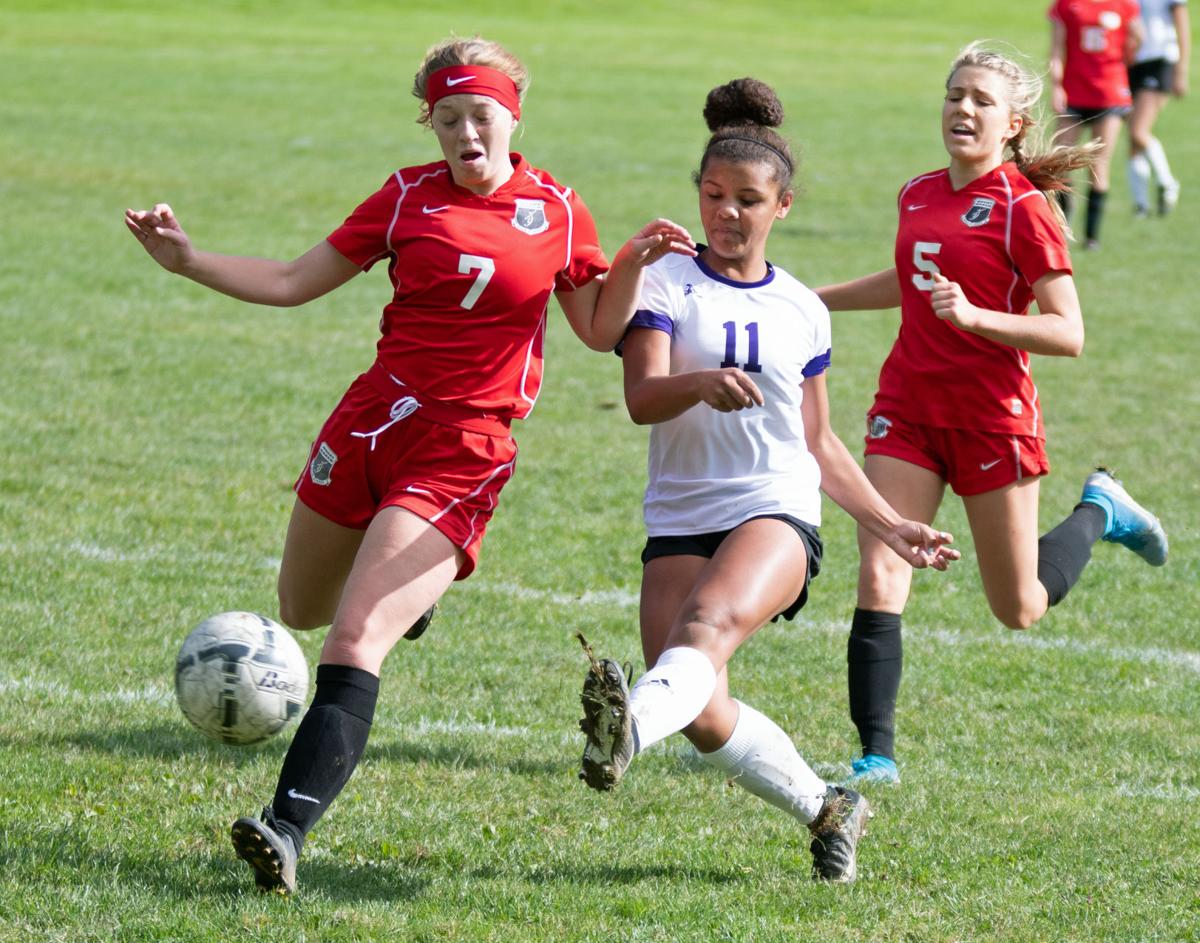 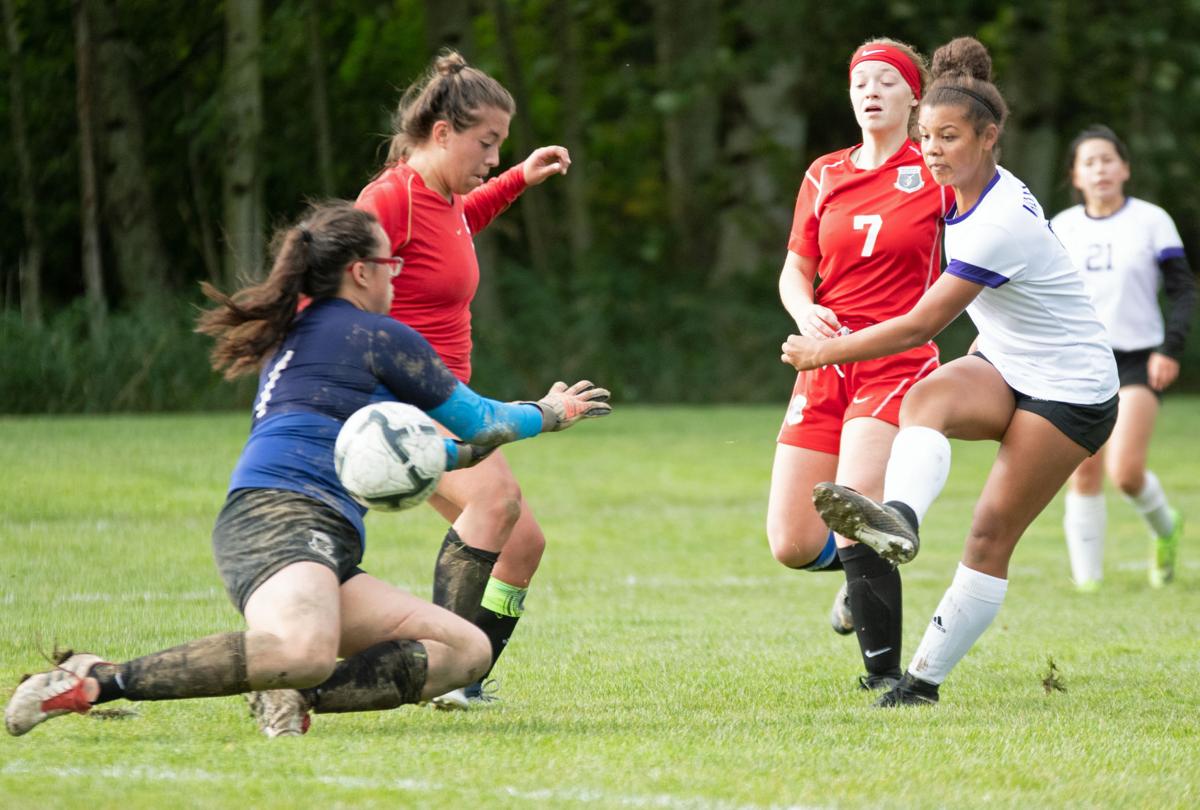 Nooksack Valley sophomore Tehya Moore kicks in her fourth goal of the first half during the Pioneers' 8-1 win over Mount Baker on Saturday. (Eric Trent/Lynden Tribune) 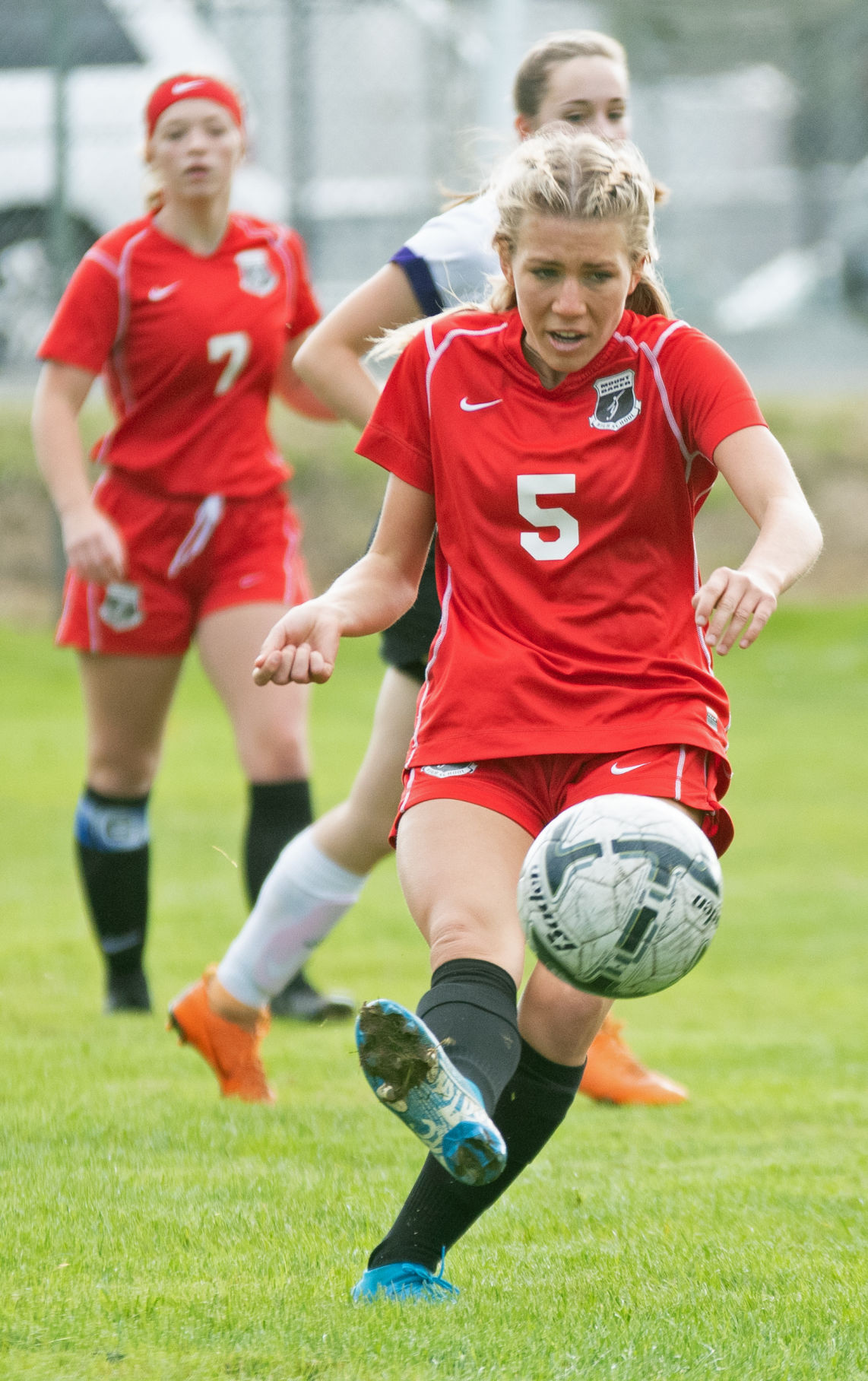 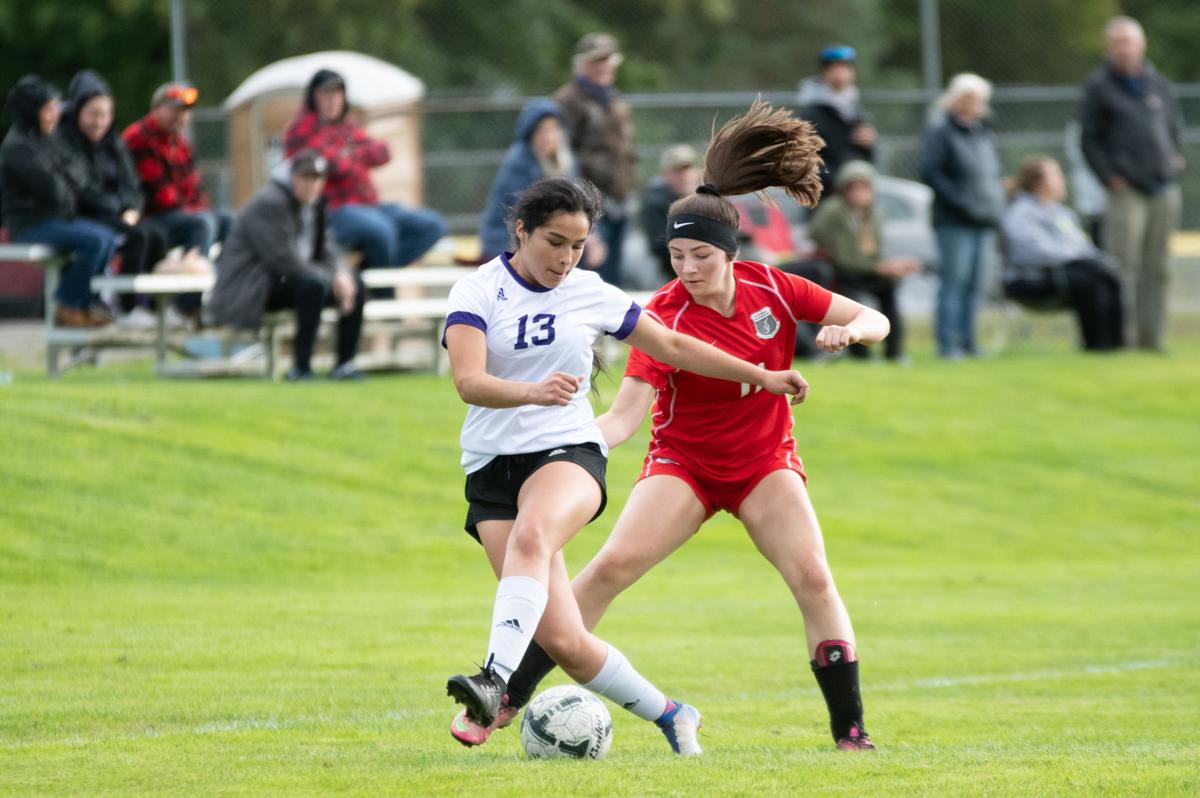 DEMING — Nooksack Valley sophomore Tehya Moore erupted for a double hat trick, knocking in six goals to power the Pioneers to an 8-1 victory over winless Mount Baker on Saturday for their first victory of the season.

Moore, the Pioneers leading goal scorer with nine on the season, scored the team’s first four goals of the game, all in the first half. After the game she didn’t even realize she finished with six goals.

“I had a lot of energy from the start, ” Moore said. “And it’s just making sure you see the field and seeing the open spots to make runs and then calling for the ball.”

Her double hat-trick, which may be the school’s single-match record, adds to her other hat trick earlier in the season. She’s already the school’s triple-jump record holder, as well. Nooksack Valley coach Konner Van Rijswijck said Moore putting in nine goals halfway through the season is impressive.

“She’s just a very dynamic player,” Van Rijswijck said. “She’s very fast. Her instinct is good. She’s just one of those players where when she gets the ball she usually makes the right decision.

“I’ve tried to coach her here and there but, honestly, naturally, she just has the ability to read the game and take touches away from pressure. It’s an awesome thing to watch; when players understand the game without you having to bring much as a coach.”

It’s hard to believe it was the first win of the season for Moore and the Pioneers, who looked dominant throughout, scoring seven unanswered goals to end the game. Senior Darleen Zarate and junior Mackenzie Zeilstra booted the Pioneers' other two goals.

The Pioneers followed every instruction Van Rijswijck asked of them in the pregame and halftime talks, including trying to win 50-50 balls out of the air, something they’ve struggled with. Noosack won first balls and contended in the air, and when they did get the ball on the ground they spread Baker out wide and found gaps in the defense.

The win snapped a six-game losing skid, while the Pioneers eight goals on Saturday outnumbered their season goal total of seven through six games.

Van Rijswijck said he isn’t worried about scores, he’s more focused on making sure the girls are playing the right soccer.

“I’ve been really proud of the improvement of the girls,” Van Rijswijck said. “We’ve been keeping games closer than we have in the past. I’m happy with the discipline and commitment of the girls.”

Notching this first win of the year was huge for the team, Moore said. The Pioneers have been competitive, they’ve just conceded goals in unfortunate ways.

“A lot of people look down upon us for Nooksack soccer,” Moore said. “Having a win shows we’re not what people think we are as a team. We can come out and play hard.”

For some of the smaller schools like Nooksack, Van Rijswijck said, they don’t get opportunities to win games all the time.