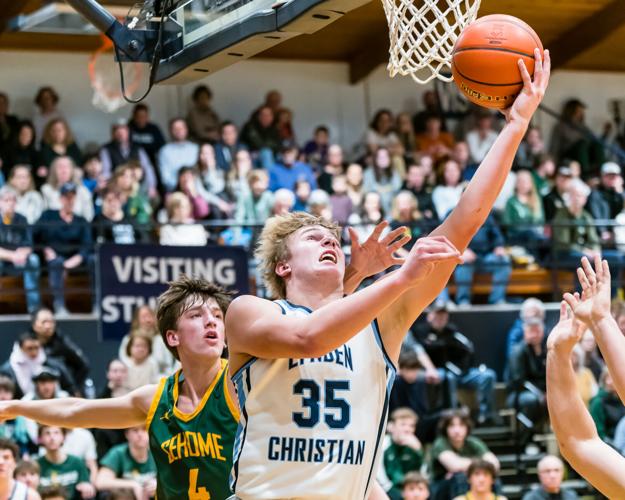 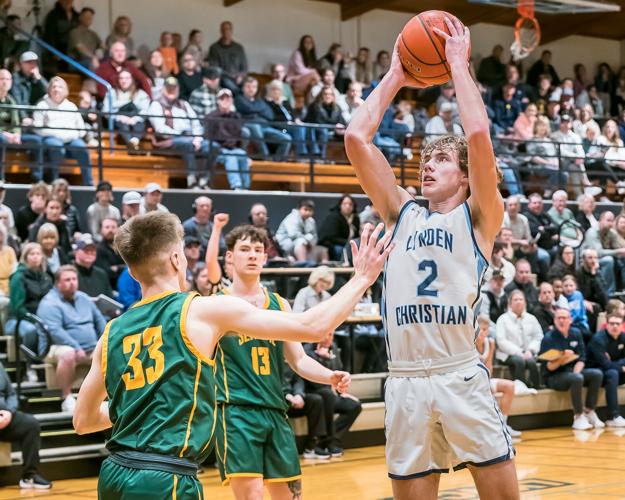 Dawson Bouma continues through a foul to add 2 points to his game total of 5 in a 76-64 lost to Sehome. (Dennis Cairns for the Tribune) 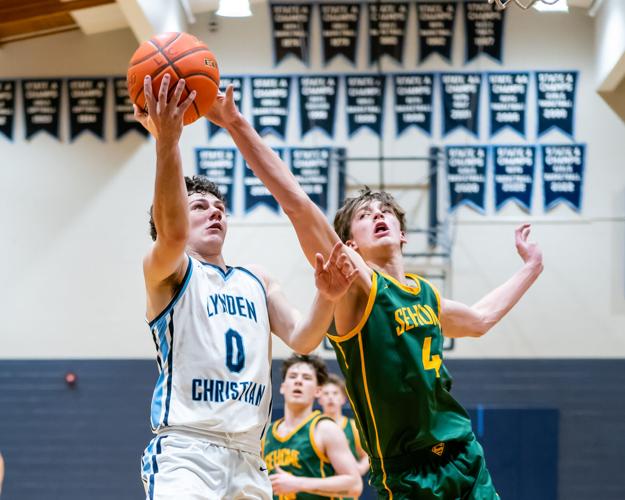 Lynden Christian Senior Guard Tyler Sipma goes in for 2 of his 16 points as Sehome's Grey Garrison defends.  (Dennis Cairns for the Tribune) 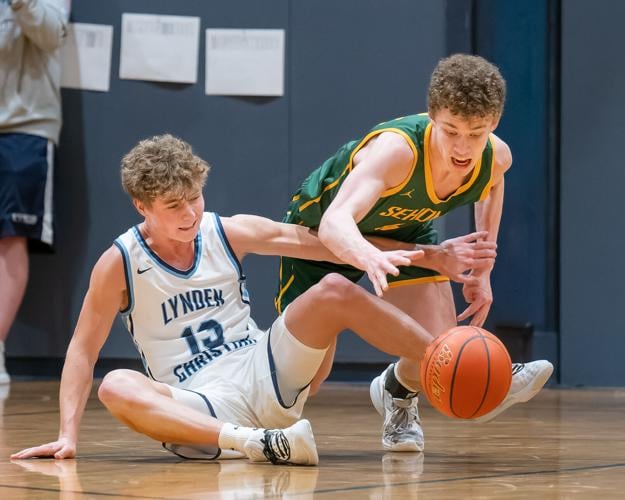 The Lync's Griffin Dykstra struggles for ball possession with Sehome's Grant Kepley. Dykstra scored 18 points for Lynden Christian but they fell 76-64 to a strong Sehome team.  (Dennis Cairns for the Tribune) 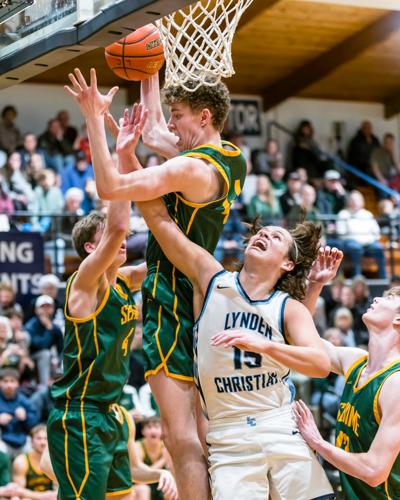 Lynden Christian's Lane Dykstra fights for a rebound among Sehome defenders in their game Thursday night. Sehome defeated the Lyncs 76-64.  (Dennis Cairns for the Tribune)

LYNDEN — Sehome was too much to bear for the hosting Lynden Christian Lync’s as they fell 76-64 to the Mariners on Thursday, Jan. 19.

The teams were tied together all game until the final quarter when Sehome broke away late. It was LC’s second loss of the season, the other one came earlier this year to Anacortes. Both of their losses came against 2A schools in the NWC, so the Lyncs will not have to worry about them down the line.

Offensively, the Lyncs had a great night until the fourth quarter when the shots stopped falling, but on the defensive side, they had trouble dealing with the size and length of the Mariners.

Despite the loss, Tim Zylstra said he is proud of the way they played and fought during the game.

“Still proud of our boys, we fought hard and that is a two or three-point game the whole way,” Zylstra said.

Sehome forward Grey Garrison had a sensational night with a game-high 26 points. His 6’7” frame made him a menace down low and was nearly impossible to stop.

For LC, junior Jeremiah Wright led the team with 21 points, followed by senior Griffin Dykstra with 18 and senior Tyler Sipma with 16.

Wright said it was a hard-fought game and will help give them some focus.

“It was a well-fought game and a really well-coached team we played against,” Wright said. “It will refocus us going into these next couple weeks up to state.”

Sehome and LC both started the game with the inability to miss. In the first four minutes, there were 27 points scored with 18 of those points coming from three-point line. Dykstra led the Lyncs with eight points in the first quarter on efficient shooting.

Garrison had a huge first quarter using every move in his arsenal to drop 13 points. Sehome went into the second quarter leading the game 24-20 over LC.

The teams continued to trade baskets in the second quarter, with neither squad being able to edge the other out. Wright had a big quarter with a couple of momentum-swinging buckets and finished the second with six points.

LC held a slight lead for the majority of the second quarter, but within the last 20 seconds, Sehome grabbed it back and went into the half leading 39-38.

After the break, LC and Sehome continued to trade punches. Sehome had their biggest lead so far midway through the third. They were up 46-40 over LC, but the Lyncs quickly responded with a couple of big threes by Dykstra and Sipma.

Sehome went into the fourth with a slim lead of 53-52.

Zylstra said they executed well, but the shots were not falling.

“We did not have help side defense. I thought we executed well down the stretch, we just did not make shots. It is hard to keep pace when they are making shots,” Dykstra said.

The LC defense had trouble stopping the efficiency and length of the Mariners, especially early in the fourth quarter. Sehome went on a 9-3 run to open the fourth and jumped out to a 62-55 lead.

The Lyncs could never recover from the early fourth-quarter deficit and dropped the game 76-64.

Zylstra said, “We will stay the course and keep working in practice. Our ultimate goal is to get better every day and at the end of the season we will still be in position to get the one-seed.”

LC plays their next game at home against Lakewood on Tuesday, Jan. 24, before another tough matchup at Blaine on Thursday, Jan. 26.