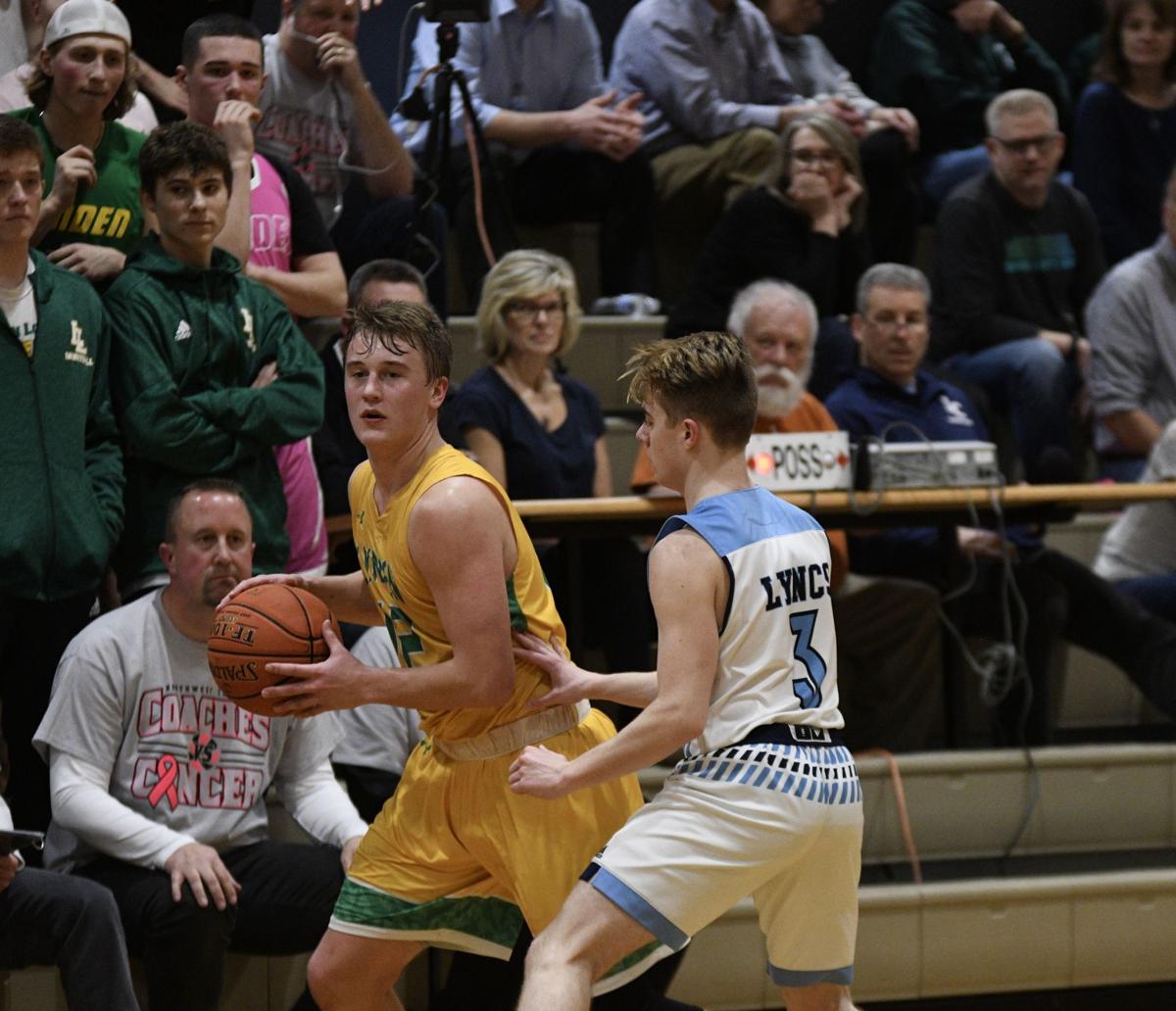 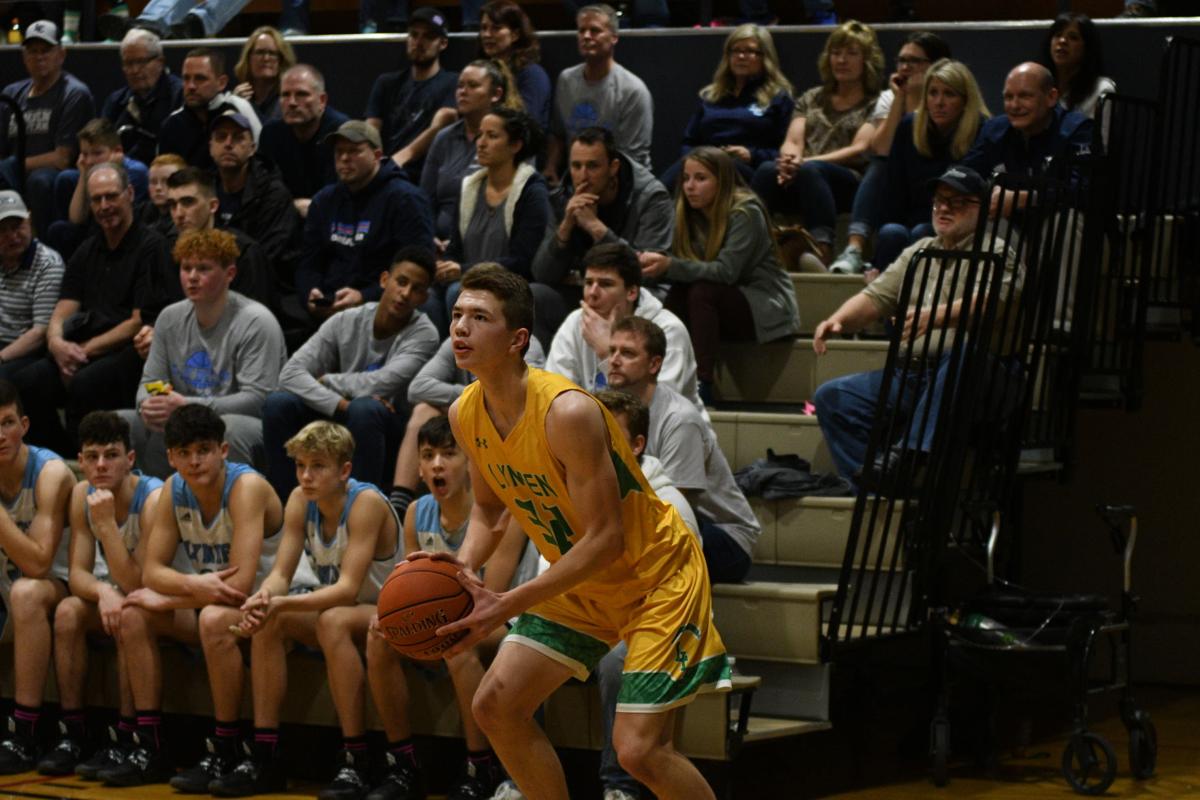 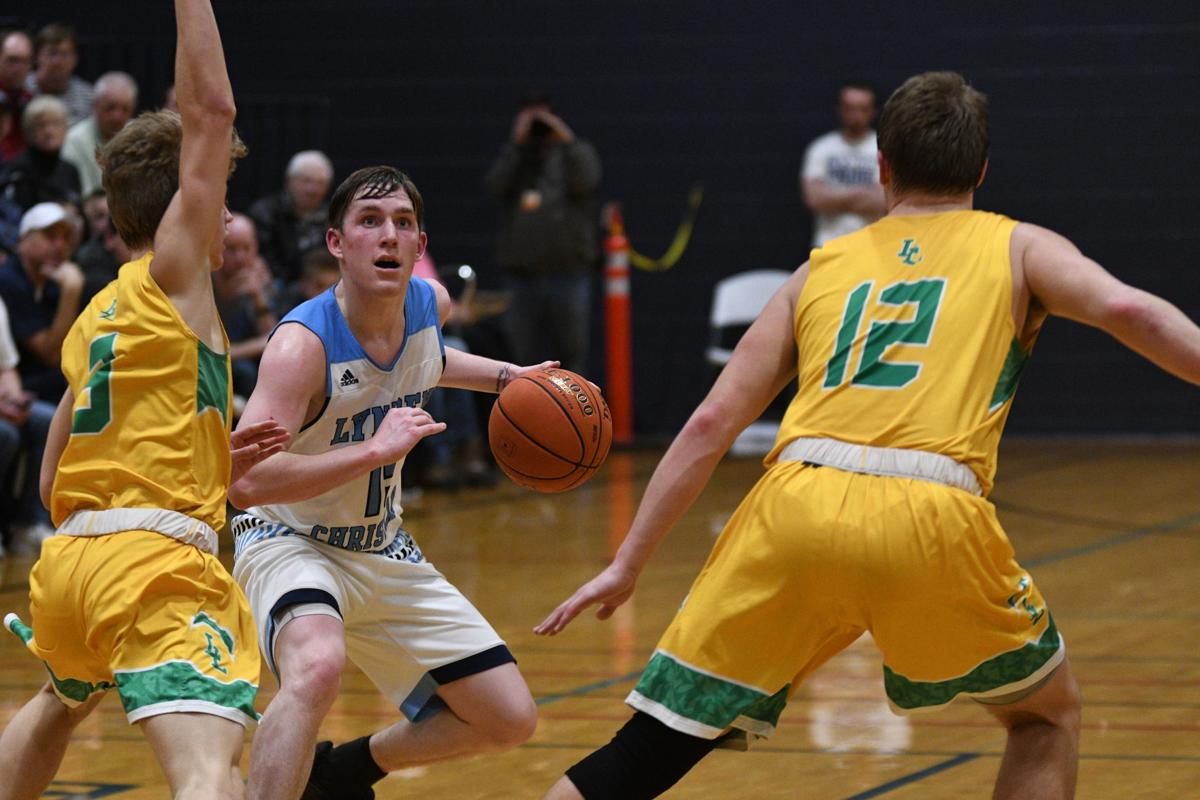 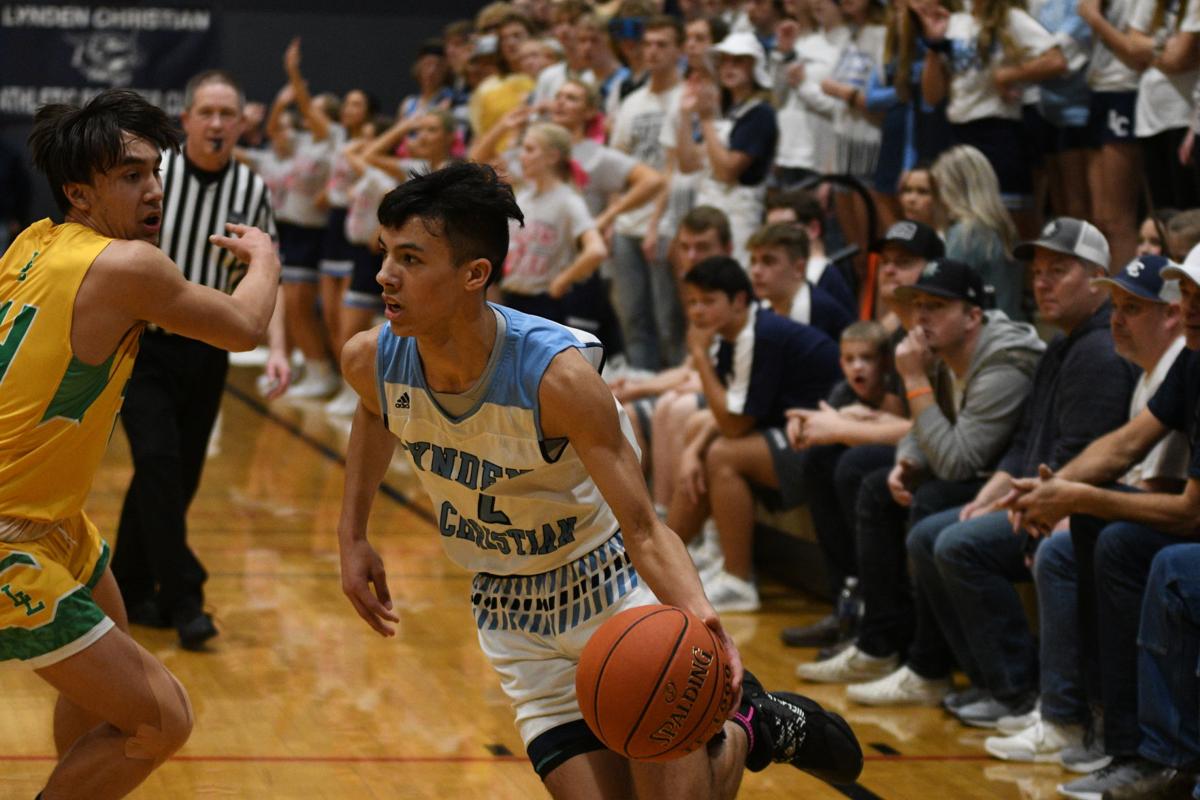 Junior Jaden DeBoer scored a team-high 19 points for the Lyncs in the loss to Lynden. (Hailey Palmer/Lynden Tribune)

LYNDEN — Brock Heppner had one message for the younger players on the Lynden boys basketball team before their game against Lynden Christian Friday night.

“This is my fourth year so I was just trying to tell these guys to relax because that’s the biggest thing,” he said. “So many kids get caught up in the moment and the crowd, so just relax and keep your legs under you.”

Heppner and junior Liam Hanenburg were a force inside for the Lions all night. Hanenburg scored a game-high 21 points to go with 15 rebounds while Heppner tallied 19 points.

Lynden outrebounded Lynden Christian 35 to 18 in the game with Heppner and Hanenburg being responsible for 19 of them.

The game looked like it could be as dramatic as the girls’ game the night before with the Lions leading 16-15 after the first quarter, but timely runs and clutch 3-point shooting by Lynden kept the Lions ahead the rest of the way.

Lynden coach Brian Roper credited his team’s defensive play for opening up the other end of the floor.

“When you get stops and get in transition it creates momentum,” he said. “I thought our guys did a nice job of executing. We were able to get some open threes on the perimeter.”

The Lions shot 44 percent from three and held the Lyncs to just 30 percent.

Coming into the game, Roper said he wanted to make sure they focused on slowing down Lynden Christian sharpshooters Andrew DeVries and Jaden DeBoer.

“You can’t lose your concentration on DeVries and DeBoer,” he said. “Those guys are two of the better shooters in the state and they’re on the same team and that makes it a challenge.”

DeBoer scored a team-high 19 points going 3-for-9 from three-point land for the Lyncs. DeVries added 16 and went 4-for-10 from beyond the arc.

The duo of DeBoer and DeVries are going to make their shots in a game, but Roper said they wanted to make the two work for them.

“We wanted to pick them up the minute they got inside of half court because that’s their game,” he said. “We knew they were going to make some, but we wanted to make them earn it and hopefully tire them out a little bit.”

Lynden junior Koby Whitman was given the tall task of having to guard DeVries for most of the evening.

The Lions headed to the locker room with a 35-24 lead at halftime after outscoring the Lyncs 19-9 in the second quarter, but Lynden Christian came out firing in the third.

The Lyncs scored the first six points of the third quarter trimming Lynden’s lead down to five.

“Against Lynden Christian, no lead is safe because of the way they shoot the three,” Roper said. “I thought Roger did a good job making adjustments. He came out with a different defense that stymied us for awhile and we got a little stagnant.”

Heppner wasn’t only a problem for the Lyncs near the rim as he drained a 3-pointer late in the third quarter that pushed the Lions’ lead back out to double digits.

A three-pointer from DeBoer and a Bryce Bouwman layup to start the fourth quarter brought the Lyncs within three points, but that’s the closest they would get the remainder of the game.

The Lions went on an 8-0 run following that to stretch the lead back out to 11.

Lynden Christian coach Roger DeBoer said he thought the Lyncs had more fight in them in the second half than in the first.

“They’re really good and we knew we were going to have to play a near-perfect game to get them,” DeBoer said. “We were going to try and make some other guys make some shots and they did which is a demonstration of how good they are.”

On the bright side for the Lyncs, they’ll likely not have to play another team this season that’s nearly 7-feet tall.

“I actually shared that with our bigs after the game,” DeBoer said. “I said ‘I’ve got some really good news for you. As far as I know, anybody in the top-20 RPI does not have a 6-11 person.’”

It’s a quick turnaround for Lynden Christian as the Lyncs will look to bounce back tomorrow against Overlake at 11 a.m.

The Lions aren’t getting much of a break either and will play Meridian tomorrow at 7:15 p.m. on their home court.