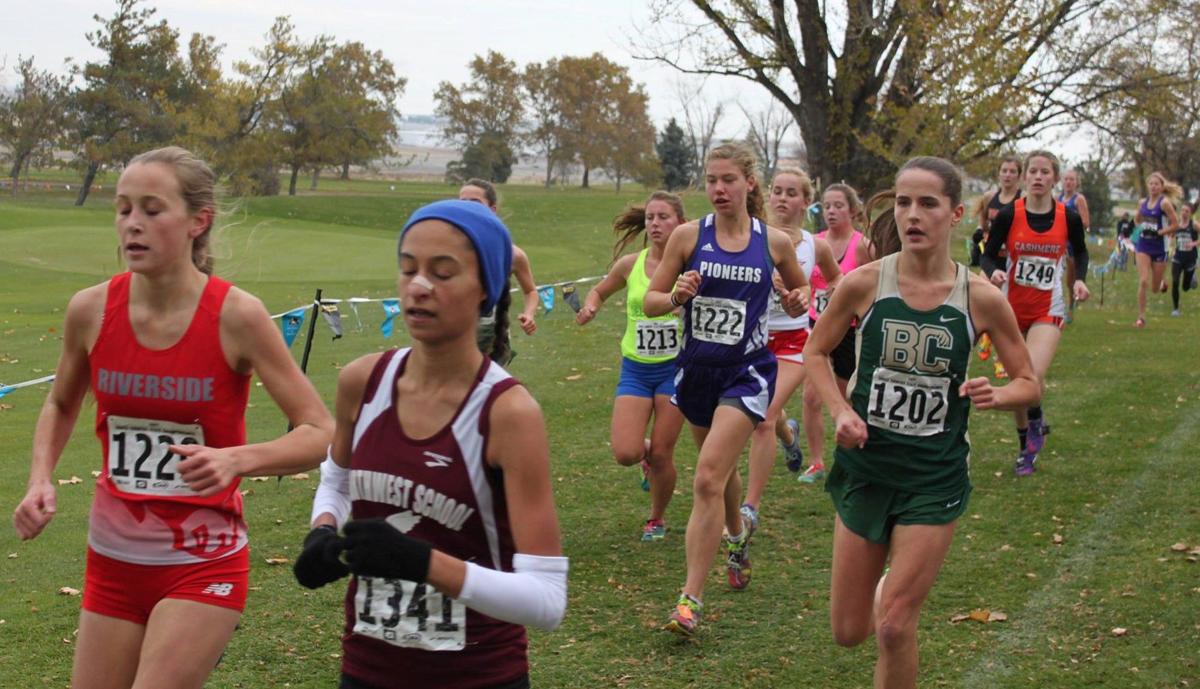 Nooksack Valley's Alyce Harlan, in purple, races among a pack of runners at one point in the girls 1A 5K at the State Cross Country Championships at Sun Willows Golf Course in Pasco. Harlan surged to the lead late in the race to claim the state title. (Courtesy photo) 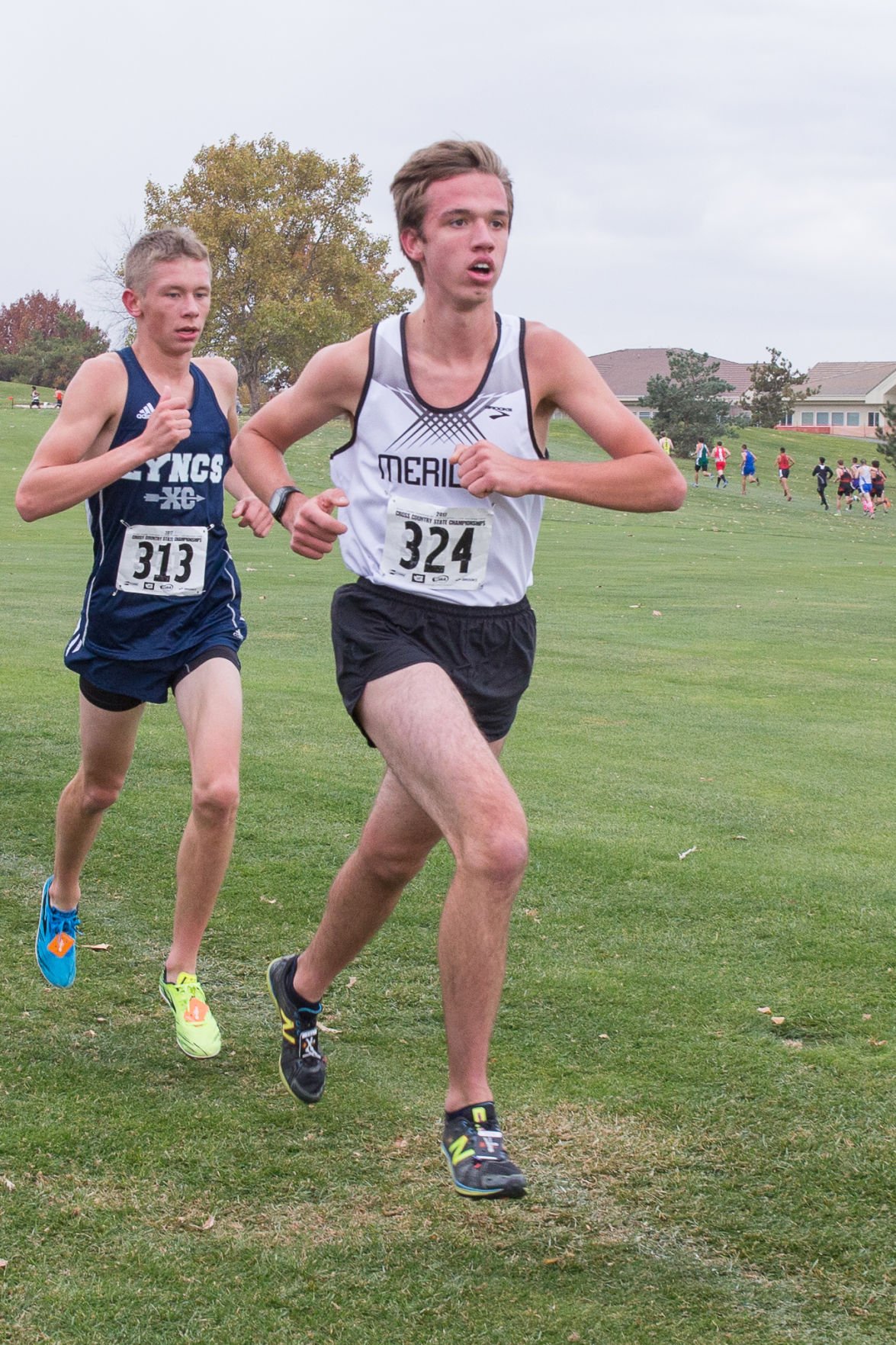 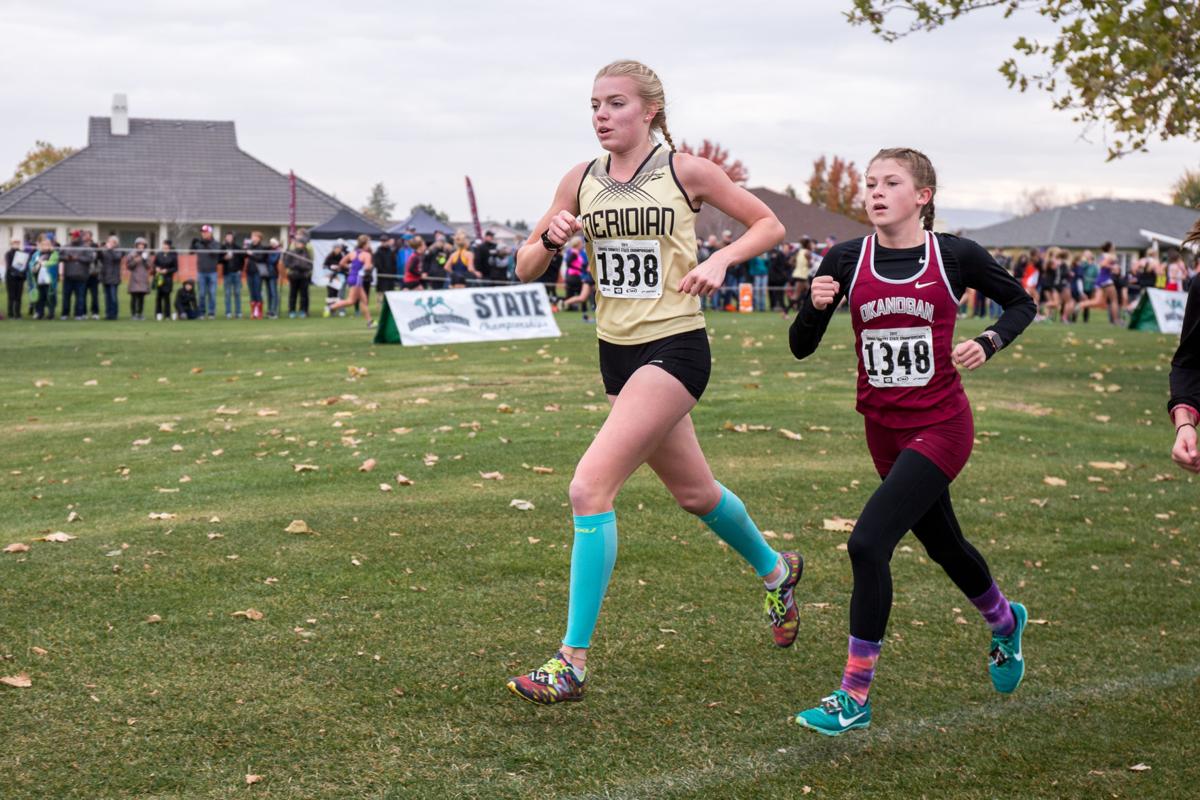 Meridian's Ashlee VanDenTop competes in the 1A girls race. The senior finished as the Trojans' top runner in 43rd. (Courtesy photo/Karen Mullen) 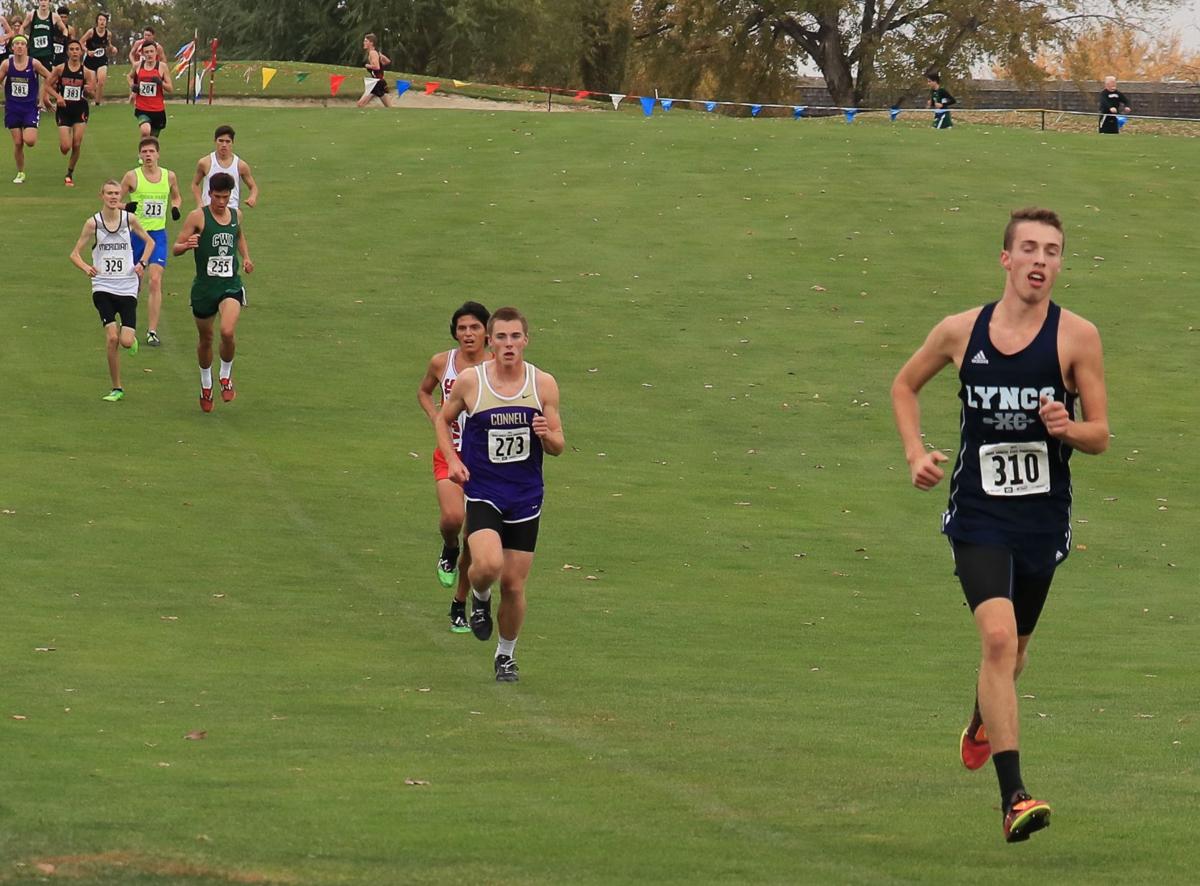 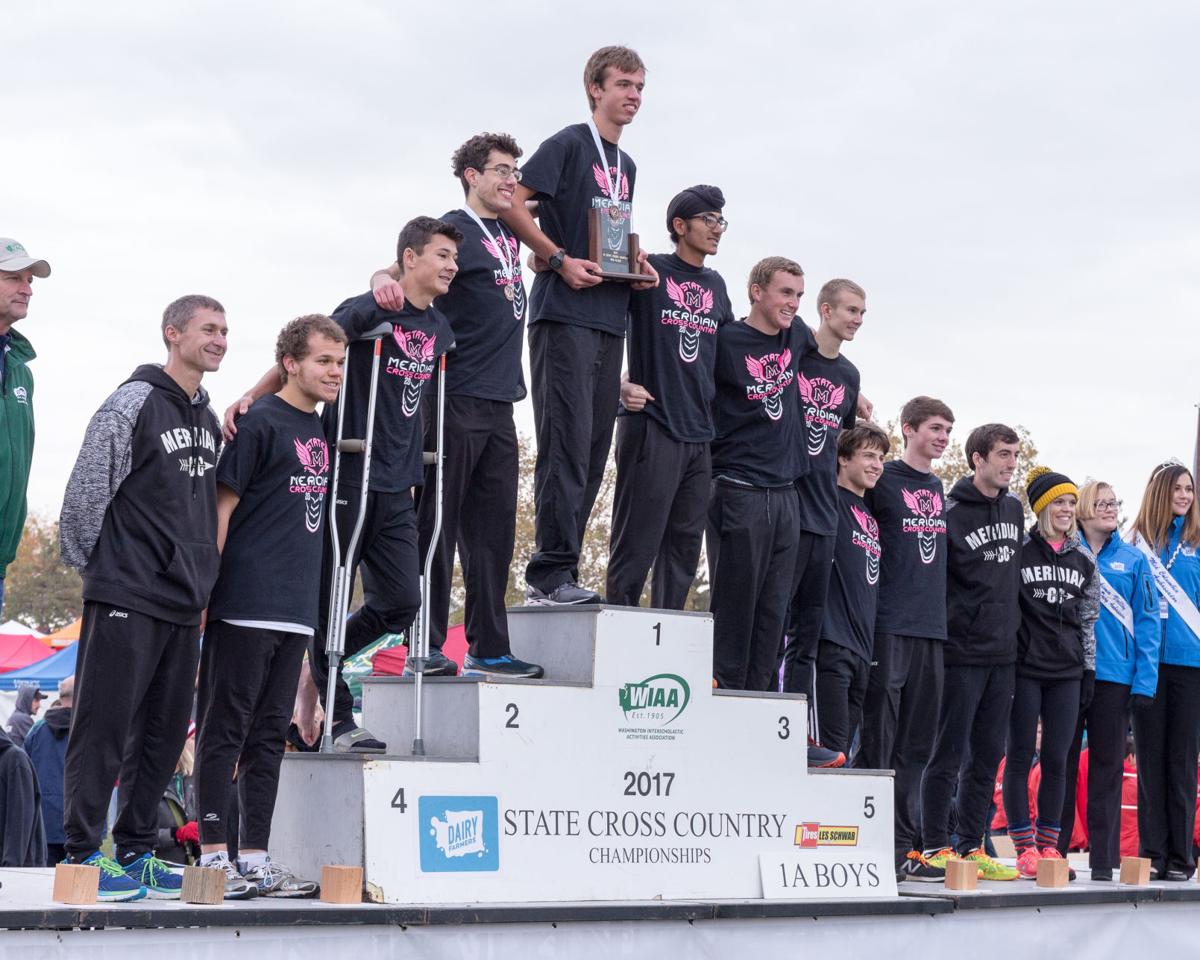 Nooksack Valley's Alyce Harlan, in purple, races among a pack of runners at one point in the girls 1A 5K at the State Cross Country Championships at Sun Willows Golf Course in Pasco. Harlan surged to the lead late in the race to claim the state title. (Courtesy photo)

Meridian's Ashlee VanDenTop competes in the 1A girls race. The senior finished as the Trojans' top runner in 43rd. (Courtesy photo/Karen Mullen)

PASCO — In her first race as a freshman back in the 2014 season, Nooksack Valley cross country senior Alyce Harlan completed her first 5,000-meter race in a pedestrian time of 28 minutes, 20 seconds.

To say she’s improved since that point would be an enormous understatement.

In Saturday’s State Cross Country Championships at Sun Willows Golf Course, Harlan capped off her historic stint for Nooksack cross country with a first-place finish in the 1A girls 5K.

Crossing the finish line in 18:06.90, a new school record, the senior was nine seconds ahead of second-place Macenna Hansen of The Northwest School.

As she was nearing the finish line, well in first place, Harlan said she looked at the clock and knew she was going to set a personal record, but thought she might be caught from behind.

Even with the victory in hand, Harlan said, “It took a while for it to completely sink in that I’d just won state.”

Pioneers head coach Jay Sloane believes Harlan’s title is the first in the history of the school’s cross country program, regardless of gender.

Sloane said Harlan “stuck to the game plan and ran a really smart race.” Trailing the leader by about seven seconds after two miles, Harlan surged ahead in the final 1,000 meters to pick up 16 seconds on Hansen and cruise to the finish.

“It was amazing,” Sloane said of Harlan’s race. “She didn’t panic and she took her time to get up with the lead pack. She ran a very aggressive last half mile as planned. The strength from all of her hard training just kind of paid off in the end.”

Harlan won the title after taking 31st at state as a sophomore and 17th as a junior last season.

Lynden Christian senior Eric Steiger took third (15:54.50) in the 1A boys race at the state meet, pacing the Lyncs to a seventh-place finish out of 16 teams with 204 points.

Steiger’s time and place rank second all-time in the history of LC cross country at a state meet. Senior Brooks DeWaard followed in 14th and earned the third-best state time for the program (16:16.10).

Both runners placed in the top 15 in 2016 as well, with DeWaard finishing seventh and Steiger taking 14th. Steiger is the only Lync to reach the podium at state three times in his career as he also took 14th as a sophomore.

"To have Eric and Brooks get on the podium again was a great reward for the two solid years of training they have done,” LC head coach Darren Postma said. “I appreciate all of the miles and hard work they have put in to lead this team.”

Hutchins takes fifth for Lynden in 2A boys race

After taking 25th at state in 2016, Lynden junior Tate Hutchins earned the third-highest finish in program history when he took fifth (15:59.00) in the 2A boys race at Saturday’s state meet.

“Tate has worked very hard and has done everything asked of him as far as workouts go,” said Lynden head coach Layne Hutchins, who is also Tate’s father. “He is ‘young’ as far as hard training goes and as he continues to build mileage, he should continue to improve.”

Coach Hutchins also said it was “very special” to qualify three runners for state. “We have a crew of boys that want to take the next step and qualify as a team (next season),” the coach added.

Hutchins, Perry and Ellis own the top three 5K times for the program since 2002.