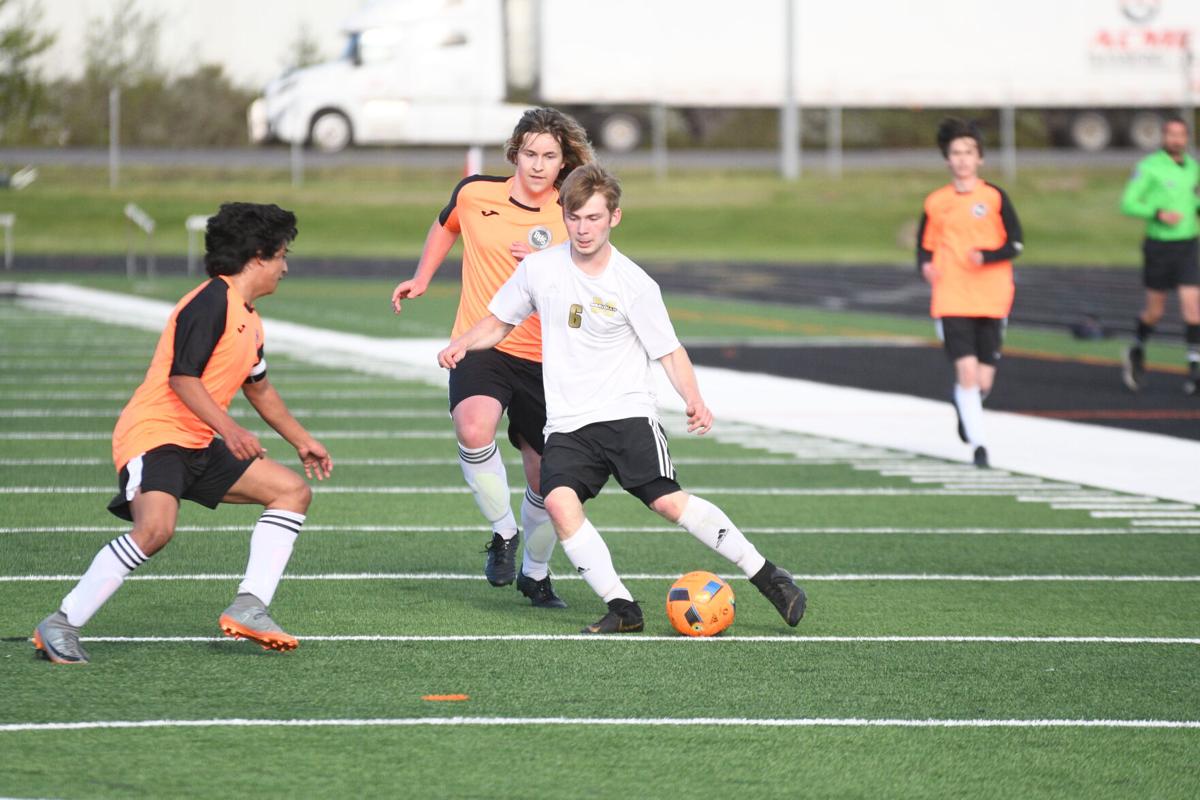 Meridian senior Dustin Wallace scored a goal in the second half of the Trojans' win. (Hailey Palmer/Lynden Tribune) 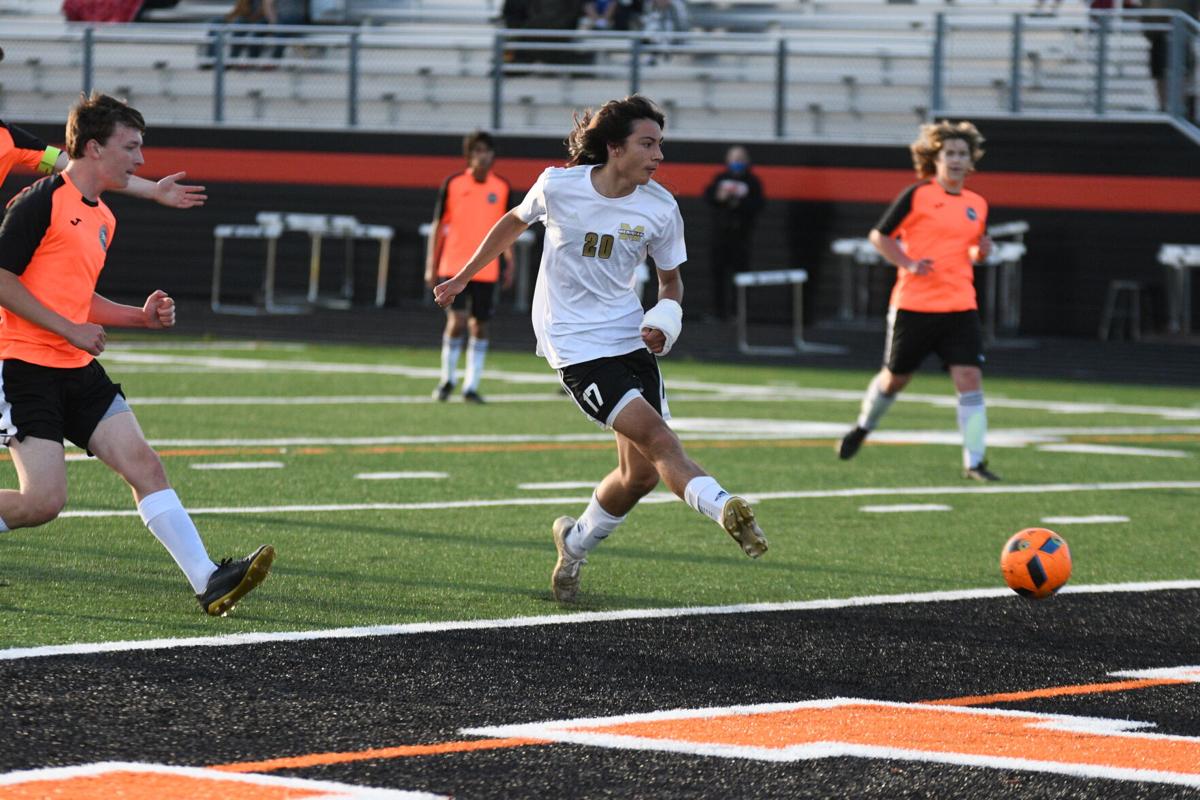 Freshman Taran Burks takes a shot at the goal in the second half. (Hailey Palmer/Lynden Tribune) 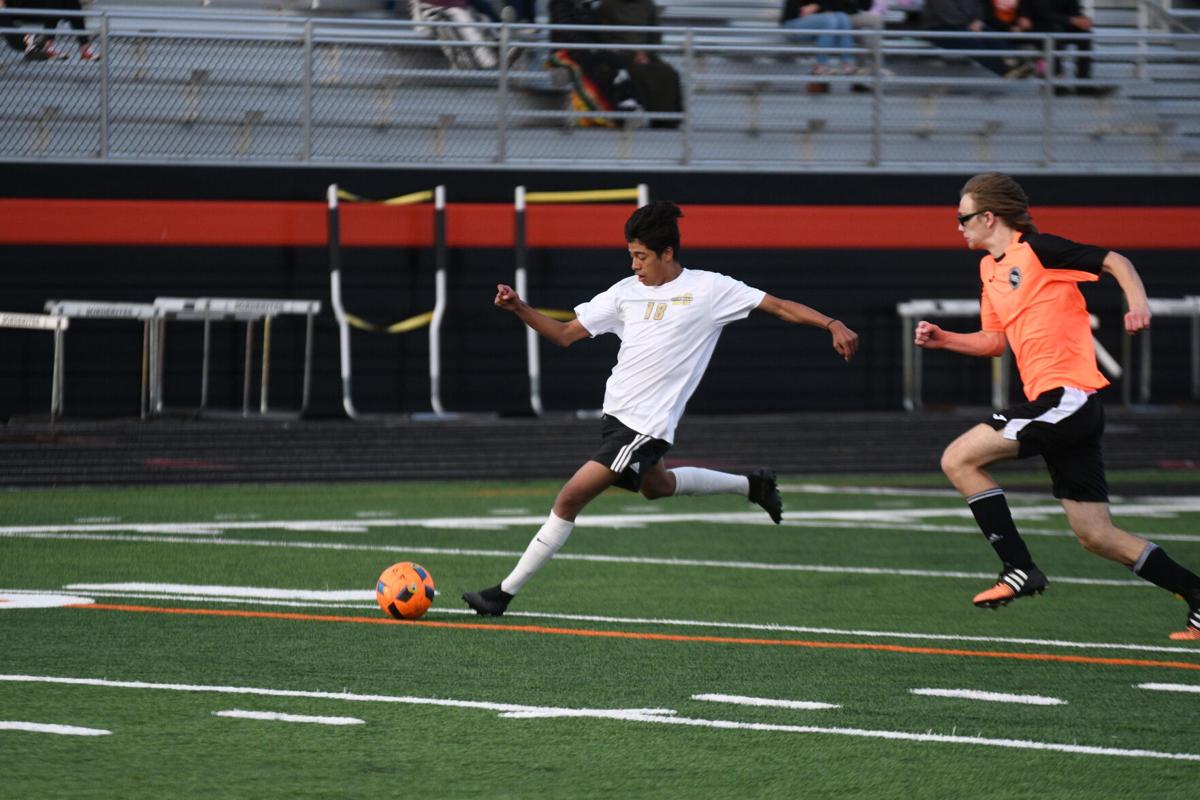 BLAINE — It was easy to tell early on that the Meridian soccer team wanted to control the pace of its game against Blaine Saturday night.

The Trojans didn’t have any problems playing how they wanted in a 5-1 win against the Borderites, dominating from start to finish.

Meridian scored fast and often in the first half, keeping constant pressure on the Blaine defense and controlling the ball on the Borderites’ side of the field.

Sophomore Eli Jensen scored the first goal of the game in the sixth minute and found the back of the net again in the 21st minute with the assist coming from senior Dustin Wallace.

Freshman Ryan Remp added a goal for the Trojans in the 22nd minute and Meridian went into halftime with a 3-0 lead.

The Trojans picked up right where they left off coming out of halftime tacking on another goal, this time from Wallace right out of the gate in the 41st minute.

Meridian stretched its lead even further to 5-0 on a goal from freshman Taran Burks in the 73rd minute.

Blaine got on the board in the final minutes of the game, but this one was put away much before the game clock said so.

“There was a lot of teamwork and everyone was rooting for each other,” Spencer said. “We saw a bunch of different guys score goals, we were able to play everybody, it was just a good team effort today.”

The win improved the Trojans’ record to 4-4-1 with one game left on their schedule this season.

In a year where Meridian and Mount Baker combined their boys’ soccer teams, Spencer said he wasn’t sure how well the players would jell together.

“I warned my guys before the Baker guys showed up that we had to treat them as one of ours from the get go and I was a little bit worried because they’re one of the teams we really compete hard with,” he said. “It was like they were part of our brotherhood already. It was amazing. The kids just fell right into place and you would never know they were from a different school. It’s just worked out perfectly.”

The win against Blaine was Meridian’s second in a row. Spencer said the team has been playing together down the stretch of the season.

“The biggest thing is we have a lot of really good players in the middle of the field and we’re able to play through them no matter what, but now we’re incorporating everybody,” he said. “It’s just turned into a full team effort.”

Meridian’s final game of the season is at 4:30 p.m. Monday, May 3, against Squalicum.

With the last game of the season being played on their own field, Spencer said the Trojans are looking to close out the year on a high note and just remember the season they weren’t sure they were going to have.