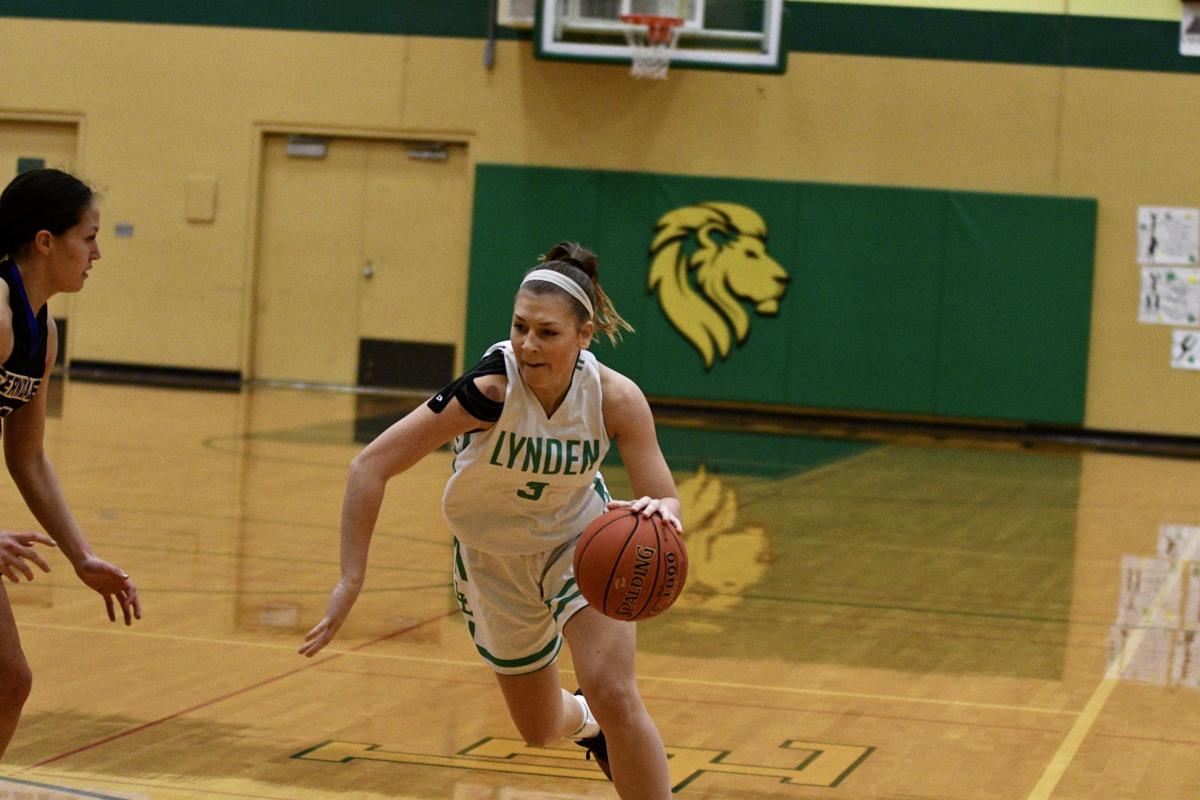 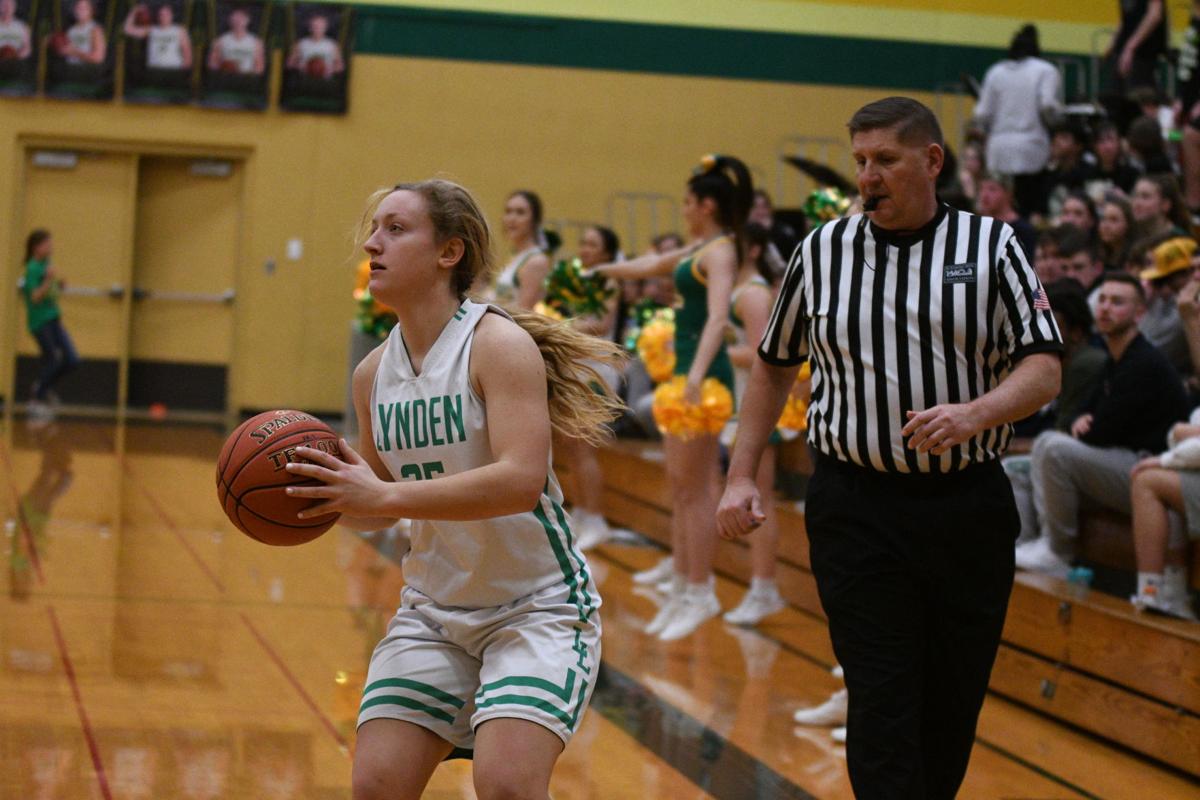 Senior Ruby VanderHaak pulls up for one of her 3-pointers in the Lions' win over Ferndale. (Hailey Palmer/Lynden Tribune) 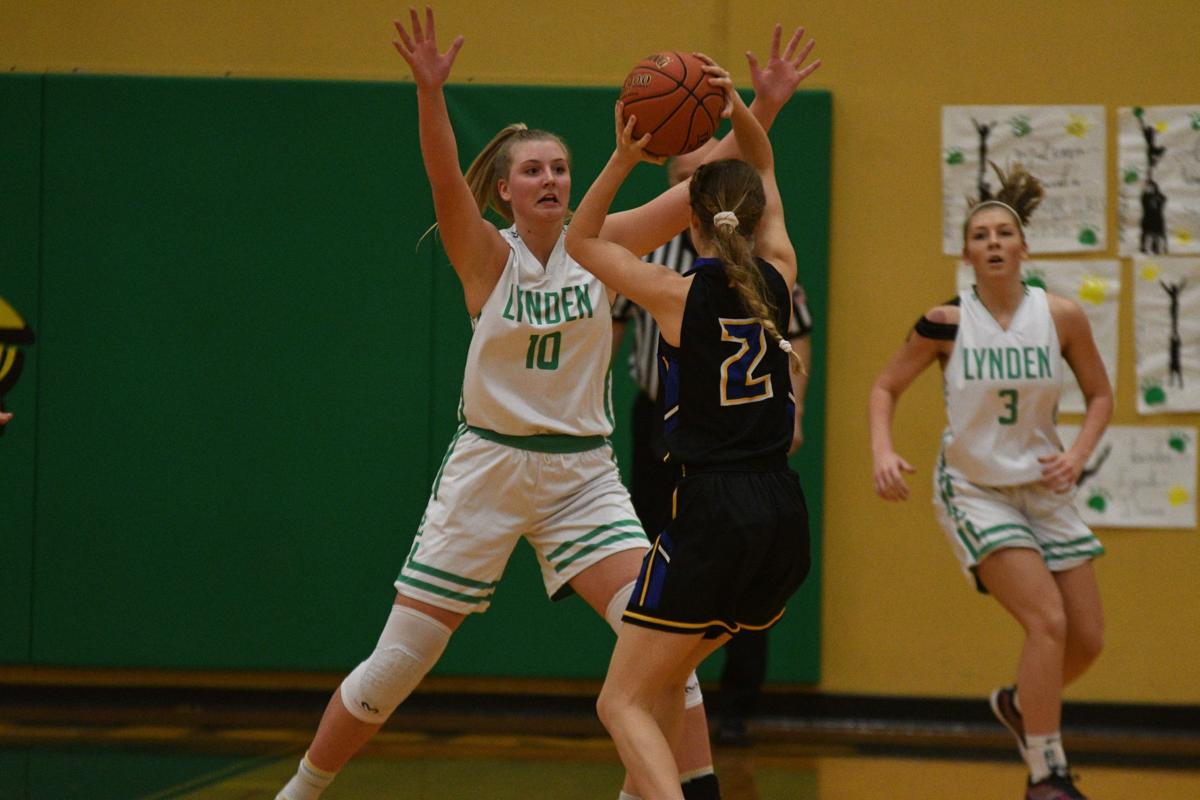 LYNDEN — The Lynden girls basketball team ended its regular season on a high note Friday night with a 66-42 win over Ferndale.

The Lions (19-1, 12-1 Northwest Conference) finished second in the conference and on a four-game win streak since their loss to conference champion Lynden Christian. The Golden Eagles (15-5, 10-3 NWC) finished fourth behind Burlington-Edison.

Ferndale’s aggressive pressure was present from the start with the Golden Eagles attacking on defense in the full court, but the Lions worked around it and were able to run their offense the way they wanted to.

“We did a really good job of establishing ourselves inside,” Lynden coach Rob Adams said. “Although we didn’t make a lot of the cookies and the bunnies right at the rim, because we were able to get the ball inside and establish ourselves at the rim, they were forced to help and when they helped we were able to kick the ball out and knock down some threes.”

Lynden led 20-13 after one quarter, but Ferndale opened the second frame on a 7-2 run to cut the Lions’ lead down to two. Adams called a timeout and then Lynden went on a run of its own to end the quarter and headed into the break with a 31-24 lead.

The Lions didn’t slow down after the break, scoring the first eight points of the second half, extending their lead to 15.

Adams said nothing special was said at halftime to get the team turned around. He simply told them to play like dogs.

“We don’t care who scores, we don’t care who gets the glory, we just play like dogs and just compete,” he said. “We came out and hit the first three and our whole bench started barking like dogs. All of a sudden, the joy came back, just like that.”

Senior Liv Tjoelker said the Lions were able to go on runs throughout the game because of their defensive play.

“Defense pushes your offense, so our defense was intense,” she said. “We opened it up by having our bigs inside and the guards can’t be as close to us [outside], so we had more space to shoot.”

Ferndale coach Terri Yost said the Golden Eagles wanted to control the pace of the game in the first half, but gave credit to how talented of a team the Lions are in being able to adjust and pull away.

“That third quarter they went on a run and we just couldn’t keep up,” she said. “Ruby [VanderHaak] went on fire and she just hit some threes. We kept going after it on offense trying to attack more and shoot, and we tried to control the tempo a little, but they’re just that good.”

The fourth quarter was the Lions just trying to grind out the final eight minutes of the game with the starters being pulled with a few minutes left.

Both teams now wait for the district RPI rankings to be released. The Lions, the current Class 2A No. 1 team in the state, are essentially a lock for the No. 1 seed in the District 1/2 tournament. Ferndale will have to wait until Monday night when all teams have wrapped up their regular seasons.

Tjoelker said the Lions are excited for the postseason, but they know the next month is going to be a test.

“We know it’s a grind. Coach has done it for 13 years and we’ve done it for four,” she said. “We know what it takes to win. This team has so much grit, we’re not going down without a fight. It’s going to be intense, we’re going to make the most of it, play one game at a time and we’re going to get that gold ball.”