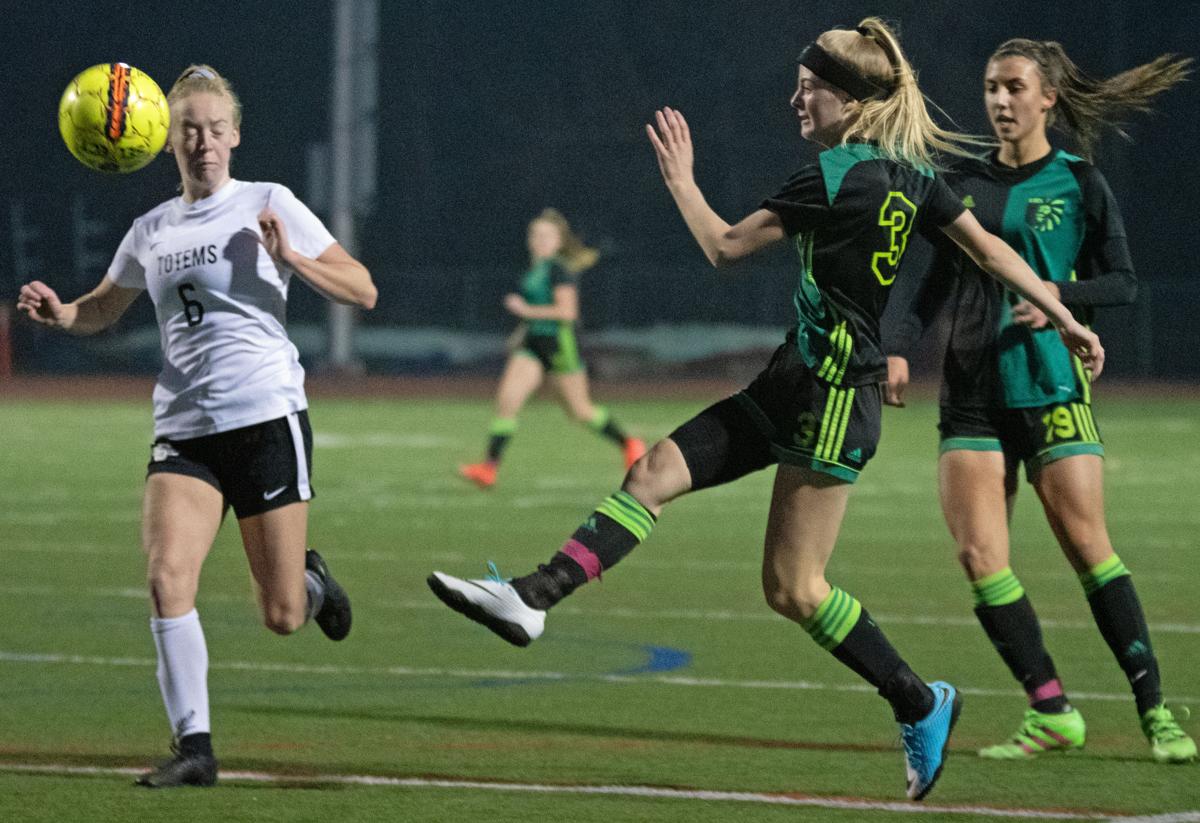 Lynden junior forward Jenna Smith gets a shot on goal in the second half of the Lions' loss to Sammamish Saturday night. (Eric Trent/Lynden Tribune) 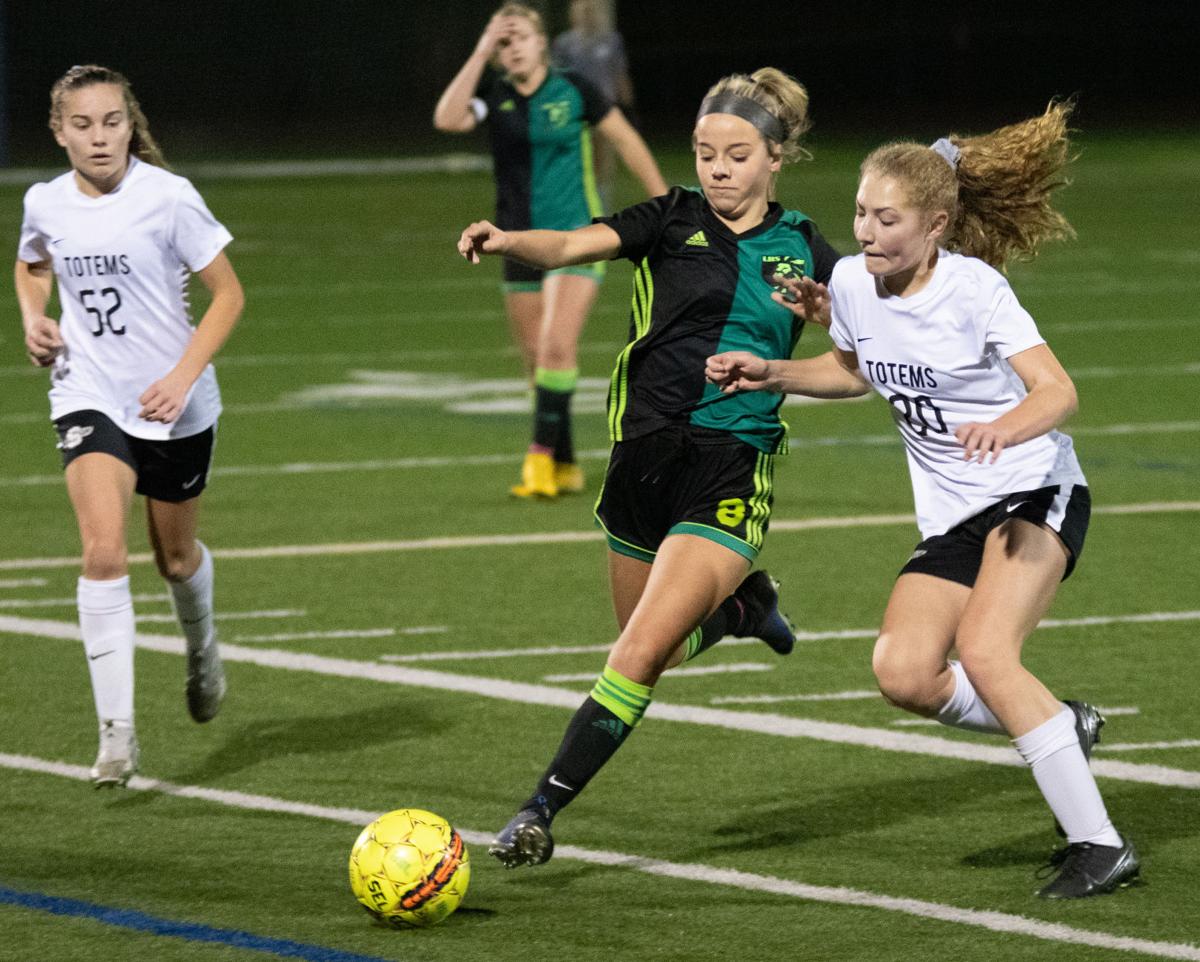 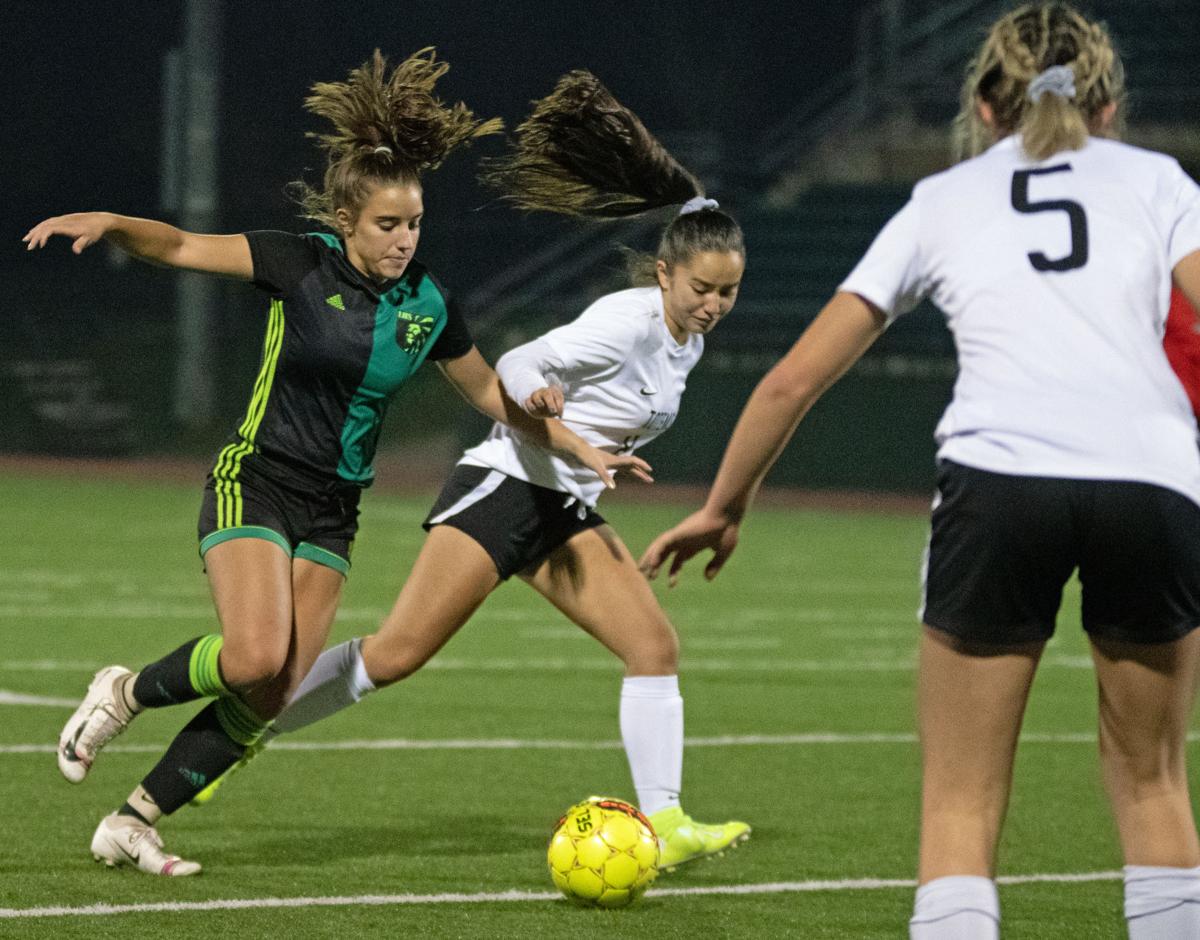 Lynden junior Kaylee Alaniz battles a Sammamish defender for possession during the Lions' loss to the Totems on Saturday night. (Eric Trent/Lynden Tribune) 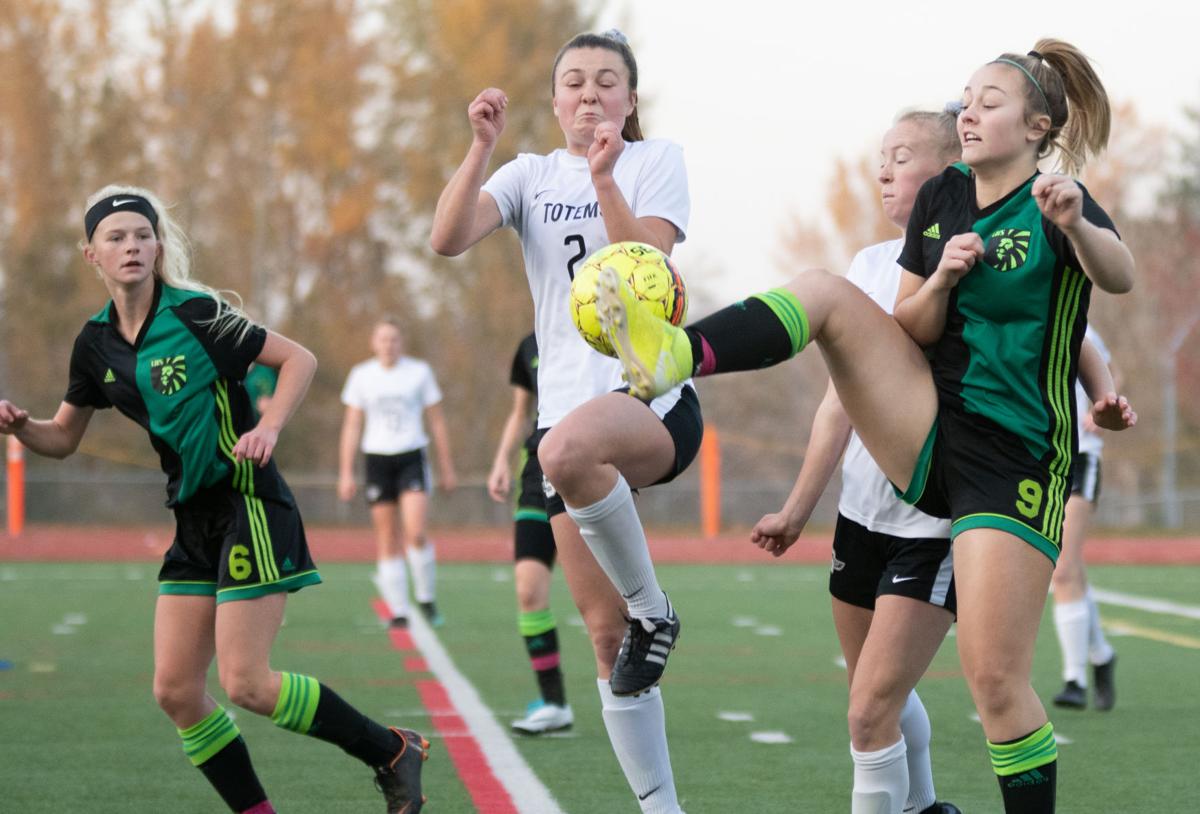 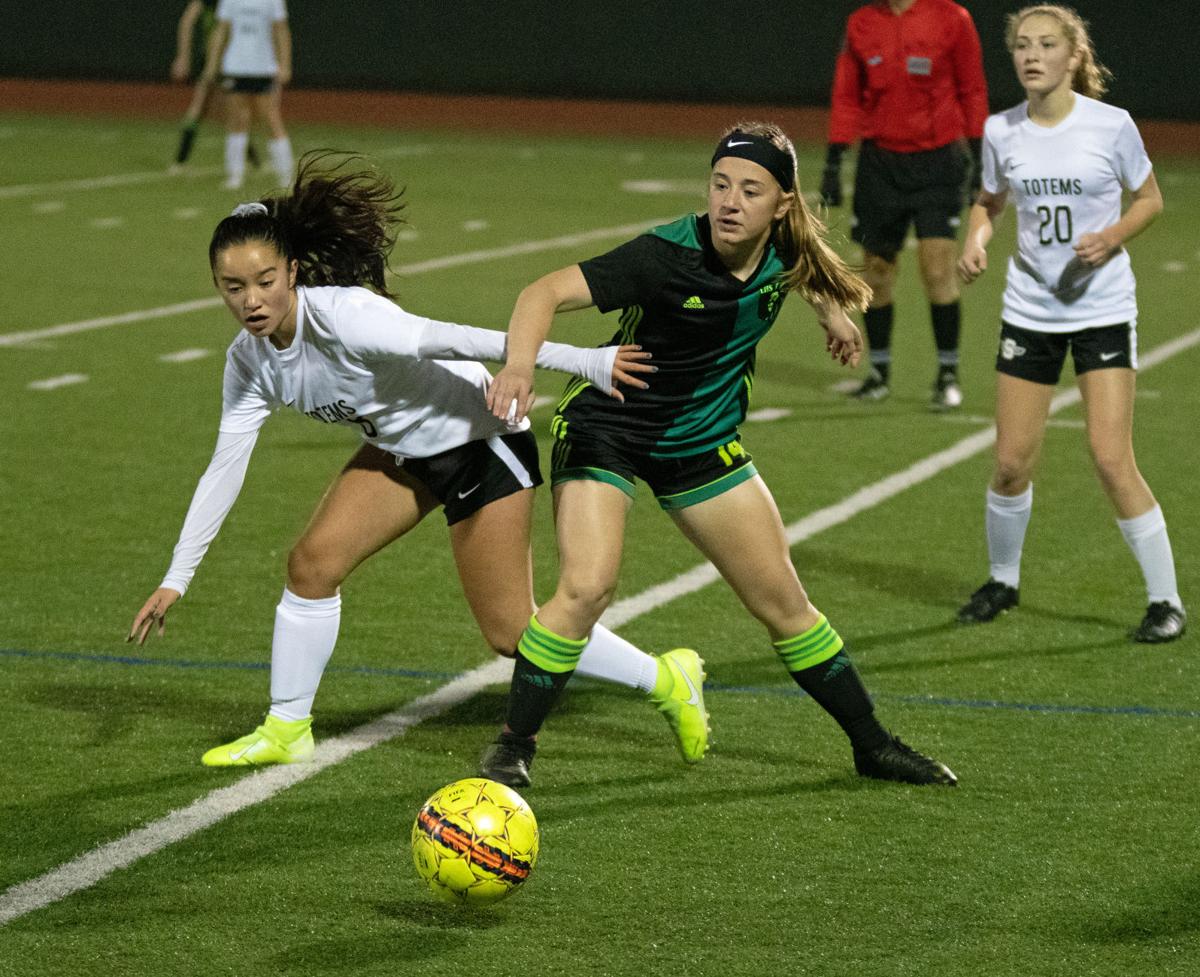 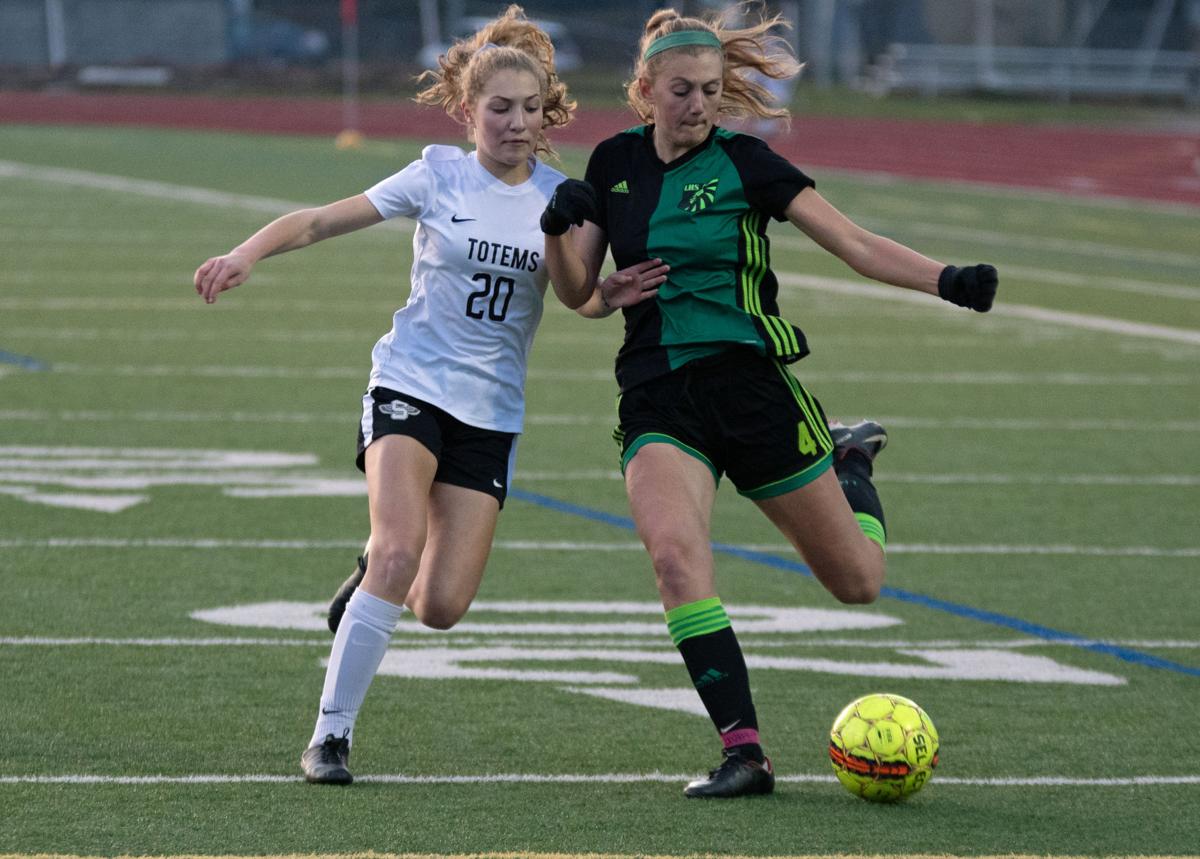 Lynden junior forward Jenna Smith gets a shot on goal in the second half of the Lions' loss to Sammamish Saturday night. (Eric Trent/Lynden Tribune)

BELLINGHAM — Lynden girls soccer's second loss of the season came at a most inopportune time.

A frenzied final 15 minutes of regulation, followed by two five-minute golden goal periods, ended in a 3-1 penalty kick shootout loss for the Lions against Sammamish in the opening round of districts on Saturday at Civic Field.

“Any time you go down to penalties it’s just kind of a crap shoot,” Lynden coach Carlos Melendez said. “I thought we’d be able to finish it before that, at least in the overtimes or the end of regulation.”

The loss snapped Lynden’s four-game win streak and sends them to the quarterfinals of the consolation bracket. The Lions now need three-straight wins to earn the third and final state playoff seed.

Lynden may have taken eighth-seeded Sammamish (9-6-1) too lightly on Saturday, Melendez said. The Lions weren’t expecting the team they faced.

“It’s a lot different team than we saw on film,” Melendez said. “We could have underestimated them.”

After a scoreless first half that Melendez called a write-off and the Lions desperately searching for a spark with time winding down, they got the surge of momentum they needed.

It came in the form of junior star Ellsie Saldivar, the team’s leading scorer, who had missed the last four games with a high-ankle sprain. With 15 minutes to go and Lynden struggling to notch a goal, she asked to enter the game.

“She’s like, ‘I can go if you need me,’” Melendez said. “That completely changed everything, having a center-forward who could play. The intensity got cranked up right then and there.”

Sammamish knocked in its first two PKs, while Lynden missed it first two to get into an early rut. Lynden sophomore Emmy Kroontje blasted her PK through to narrow the deficit to 2-1 through four kickers, but the Totems booted their next PK to come away with the victory.

The Lions would have been one win away from a state bid with the win, but now need to string together three straight to claim their spot.

“Definitely a tougher road,” Melendez said. “Tuesday against Archbishop Murphy, so we have to get ready for them. Home team, here, so no traveling. That’s a good thing.”