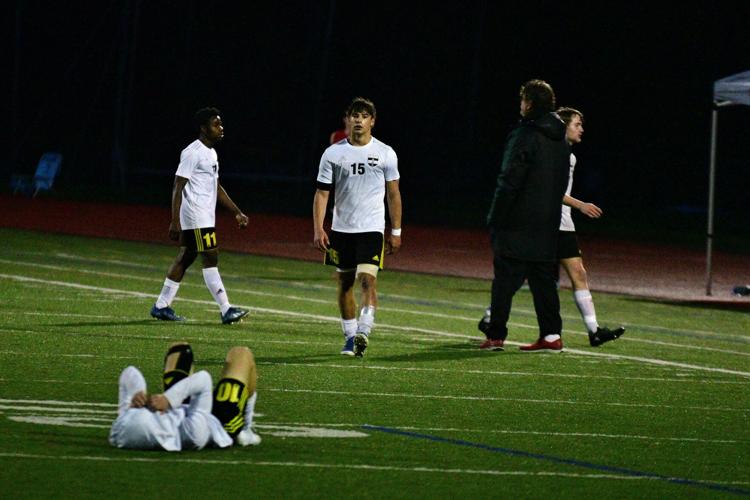 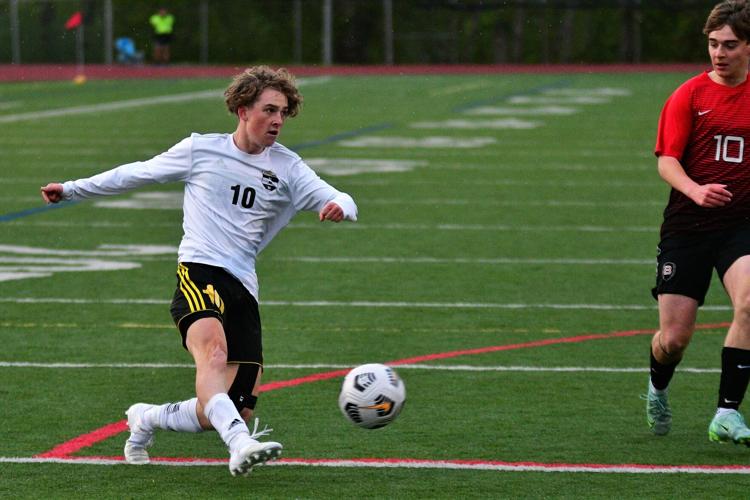 Lynden's Dillon LeMay attempts to cross to a teammate in the Lions' 2-1 loss to Bellingham on Thursday, May 12. (Connor J. Benintendi/Lynden Tribune) 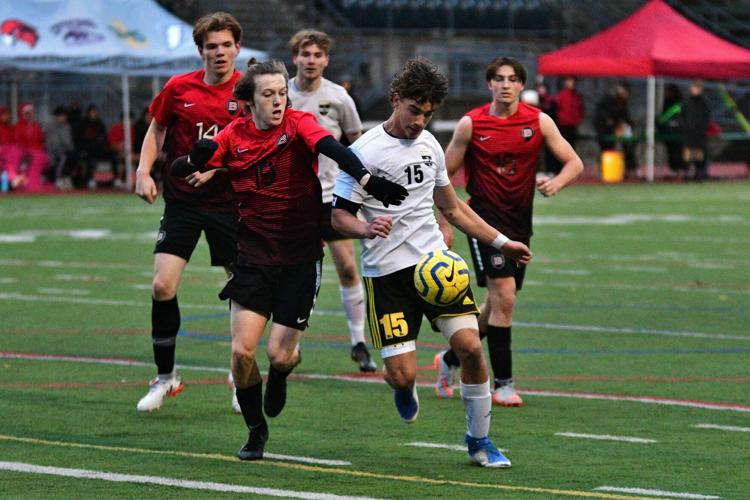 Lynden's Kole Antypas (No. 15) tries to fend off Bellingham's Yale Morrow in the Lions' 2-1 loss to Bellingham on Thursday, May 12. (Connor J. Benintendi/Lynden Tribune) 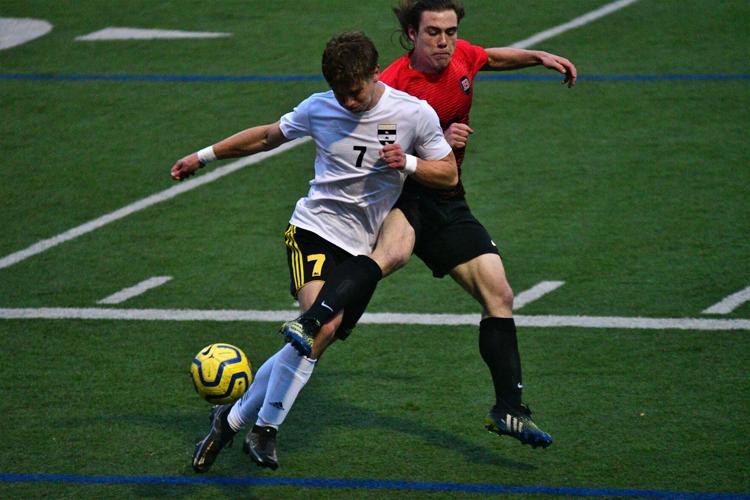 Lynden's Collin Anker fights through a Bellingham defender in the Lions' 2-1 loss to Bellingham on Thursday, May 12. (Connor J. Benintendi/Lynden Tribune) 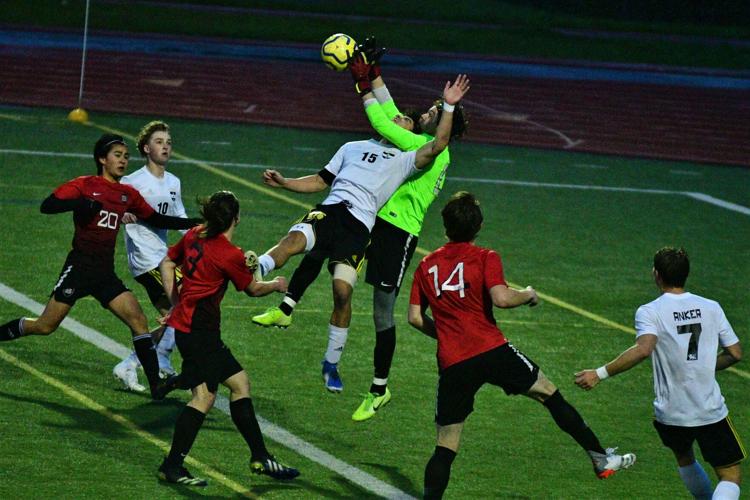 Lynden's Kole Antypas (No. 15) gets wrapped up in the arms of Bellingham's Henry White as he goes for a header near the goal in the Lions' 2-1 loss to Bellingham on Thursday, May 12. (Connor J. Benintendi/Lynden Tribune)

BELLINGHAM – The Lions fought tooth and nail to keep their season alive. Such is the postseason, only one team leaves the field with another game on their schedule.

“I thought we had it,” Lynden junior Trey Smiley said. “We played our hearts out in the Squalicum game, coming out banged up. I think we gave it our all, but there’s only so much you can do.”

Lynden, the No. 4 seed in the 2A District 1 tournament, began the postseason with a narrow 2-1 victory over No. 5 Archbishop Murphy. They battled against undefeated, top-seeded Squalicum in the semifinals, but fell short 2-0.

The Lions began the contest exactly how they drew it up, breaking the zeroes early.

In the 15th minute, Lynden drove the ball in close after a missed shot on goal. Junior Collin Anker, Cody Postma, Colton Allison and senior Kole Antypas swarmed to the goal.

Multiple cleats struck the ball at once, deflecting off a Bellingham defender just inside the right post, finding the net. The Lions took a 1-0 lead.

The first half drew near a close with strong defense from both sides. Bellingham senior Ryan Diefel squeezed in a goal of his own before the break, sending both teams to the locker room in a tie game.

Bellingham’s defense in the second half was next to impenetrable. Every offensive break Lynden managed to pursue on the Bayhawks’ side of the field was quickly thwarted.

That also opened things up for the Bellingham offense to get back in scoring position.

“We just gave them way too much space,” said Lynden head coach Drew Smiley. “We were outmuscled most of the game, that was the problem. We were constantly fighting physicality.”

Bellingham took their first lead of the game in the 44th minute, on a goal from senior Aiden Buckingham. Lynden wasn’t able to break through the Bayhawks’ defense the remainder of the half, and the final whistle was imminent. Then it came.

The Lions have battled through a slew of injuries to many of their best players. They had done all they could.

“No excuses on this at all, but we’re really beat up. Like, extremely beat up,” Drew said. “[Even if] we win this one, what do we look like on Saturday?”

Lynden finished their season 11-6-1 overall (10-3-1 NWC) following the loss, as they were eliminated from the 2A District 1 tournament.

Drew said the team was much more successful than they had maybe expected to be at the beginning of the season.

“It’s pretty amazing, we only have — on the field — we only have five year-round soccer players,” he said. “They did really well, you drive them as hard as you can, but they over-achieved there’s no doubt about it.”

The team will graduate four seniors, three of whom were starters. Next season the team will boast 12 seniors on their roster, as much of the current team are juniors.

“I’m just proud of these boys. We came in a fairly new team, not a lot of seniors,” Trey said. “Win or loss we always are there for each other, and I think a new family was born with this team.”