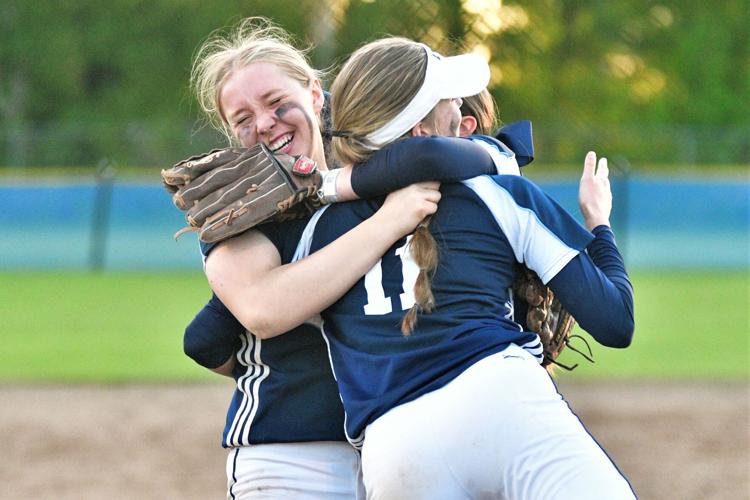 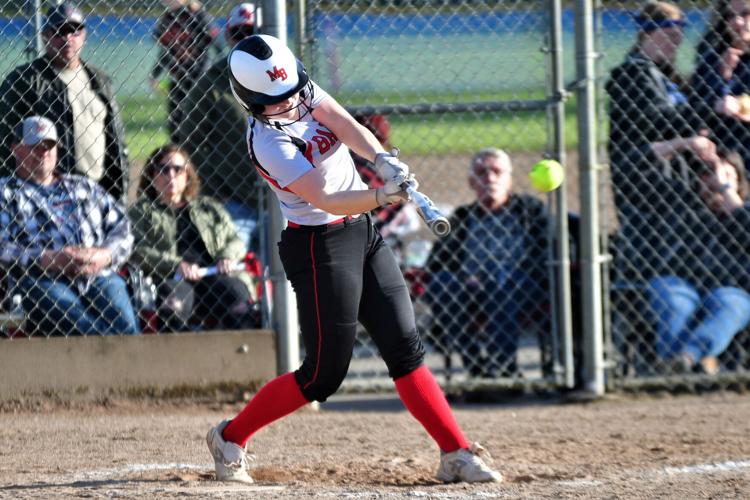 Mount Baker's Gracie Zender puts a ball in play in the Mountaineers' 12-7 loss to Lynden Christian on Thursday, May 19. (Connor J. Benintendi/Lynden Tribune) 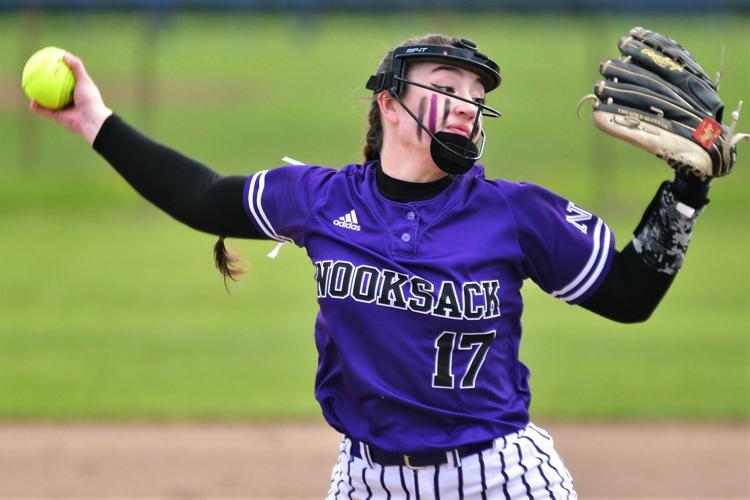 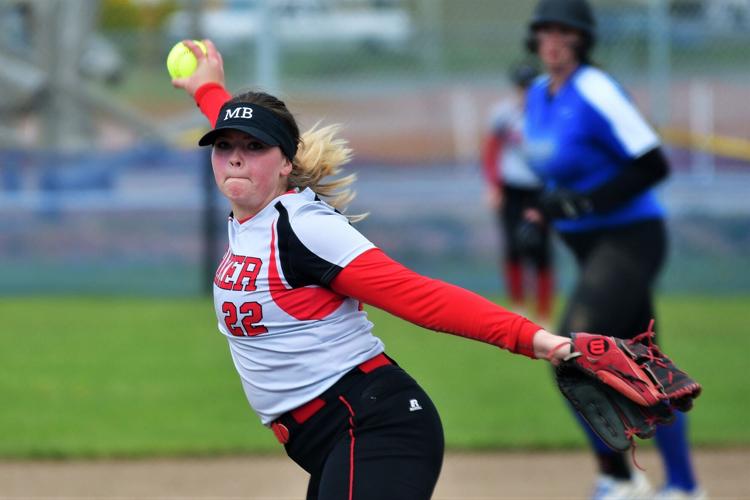 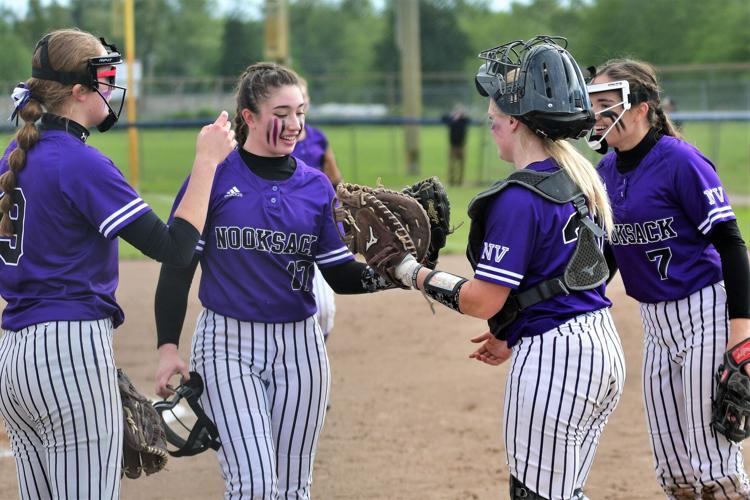 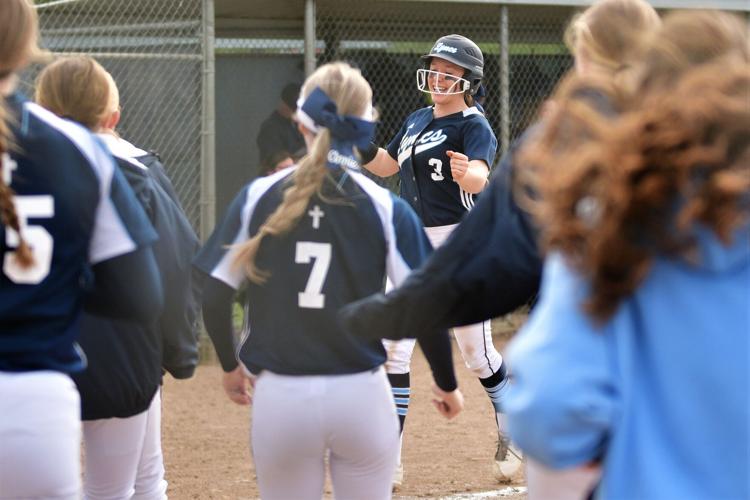 LC's Megan Smit (No. 3) strides into home plate following her three-run home run in the top of the fourth inning during the Lyncs' 11-1 win over Cedar Park Christian on Thursday, May 19. (Connor J. Benintendi/Lynden Tribune) 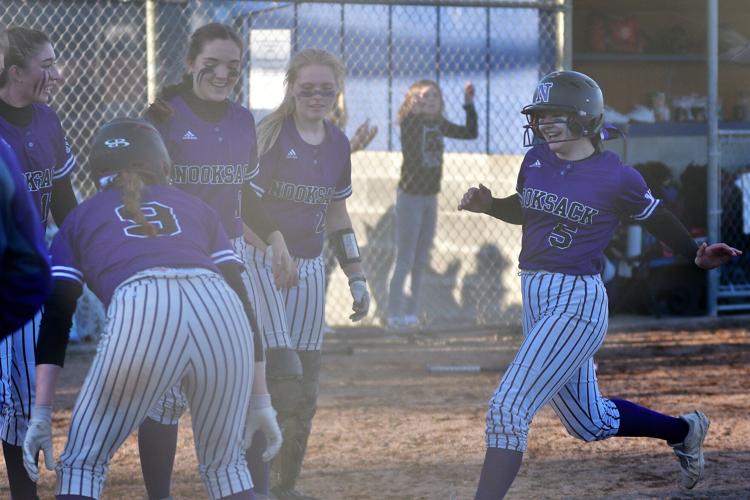 Nooksack Valley's Kenzie O'Bryan (right) is met by her teammates at home plate following her solo home run in the bottom of the fourth inning during the Pioneers' 12-1 win over Blaine on Thursday, May 19. (Connor J. Benintendi/Lynden Tribune) 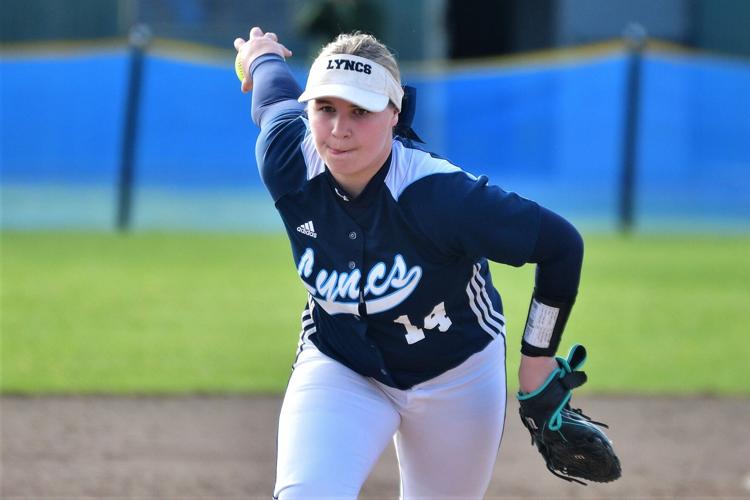 Lynden Christian's Anna Engels winds up for a pitch in the Lyncs' 12-7 win over Mount Baker on Thursday, May 19. (Connor J. Benintendi/Lynden Tribune) 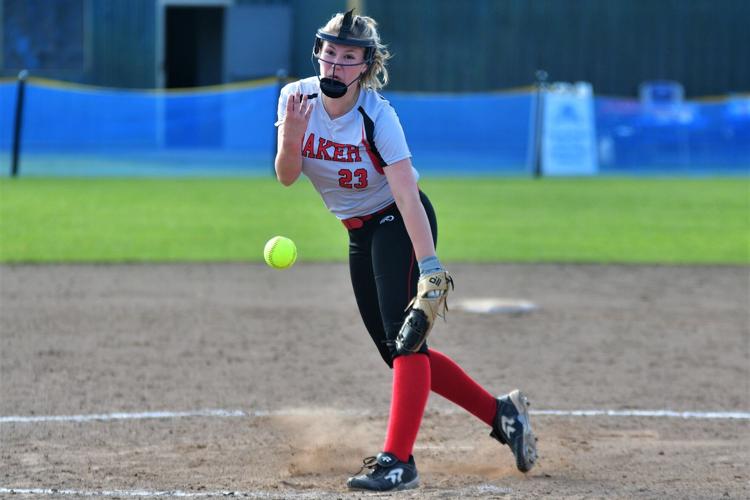 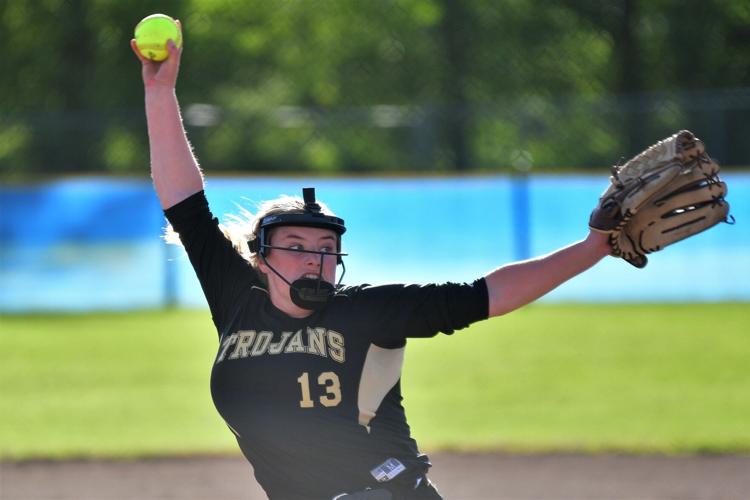 Meridian's Katie Prengaman winds up for a pitch in the Trojans' 15-1 loss to Granite Falls on Thursday, May 19. (Connor J. Benintendi/Lynden Tribune)

SEDRO-WOOLLEY – The first day of the 1A District 1/2 tournament did not disappoint.

Of the four area schools that entered the tournament, three remain. Four total Whatcom County schools still have a shot at a state berth, and one is guaranteed.

Lynden Christian was the surprise of the day, defeating Cedar Park Christian by a 10-run margin in the quarterfinals. The Lyncs, who finished their regular season 9-9 overall, then defeated Mount Baker (16-4 overall in regular season) in the biggest upset of the tournament thus far.

“I’m so proud of all of them, they did everything so perfect today,” said Lynden Christian head coach Brooke Heystek. “Down to Anna pitching a gem of a day, and these girls’ hitting.”

Nooksack Valley outscored their two opponents 24-1, continuing its season-long dominance into the postseason. The Pioneers extended their win streak to 21 games dating back to the second game of the regular season.

They will face LC in the 1A District 1/2 championship game on Saturday, May 21.

“We’re glad about where we’re at, that’s kind of where we wanted to be today,” said Nooksack Valley head coach Tom Harmon. “But we’ve still got Saturday to go.”

Mount Baker dropped into the consolation bracket following their loss to LC and will need three wins on Saturday to clinch a state berth.

Until Saturday’s final games, nobody is safe from elimination.

“We made it a little bit tougher, but everything we want to do is still ahead of us,” said Mount Baker head coach Ron Lepper. “Even if we won this game, we still would have had to go win a game on Saturday. So now we’ve just got to win a couple of games.”

The Mountaineers’ first game on Saturday will be against Granite Falls. That and their next two games will all be loser-out contests on their road to try and clinch a state berth.

Meridian was the only team eliminated on day one. The Trojans knocked out Sultan on Friday in a 15-0 play-in victory but saw their season come to an end after back-to-back losses.

A brief recap of each game from Thursday is below.

The Pioneers shut out the Trojans in each team’s first game of the day, earning the win in five innings.

Oettel went 2-for-3, adding an RBI as Kimball finished 2-for-3 with 2 RBI. Anderson batted 2-for-4 and had the Pioneers’ lone triple of the game.

That effort helped propel Nooksack Valley to another 5 runs in the bottom of the third, which would be more than enough to end it in five innings.

Pioneers senior Jordyn Relethford was as effective in the circle as she has been all year, striking out 10 batters and surrendering just two hits. Nooksack Valley moved on to the semifinals against Blaine as Meridian dropped into the consolation bracket to face elimination.

Mountaineers senior Kaitlyn Rosenburg threw her first career no-hitter in a five-inning win to open up the bi-district tournament.

Rosenburg struck out nine batters in the process, fueling Mount Baker’s bid to the semifinals. Senior Ashlynn Cloninger gave the Mountaineers a 3-0 with a solo home run in the bottom of the second inning.

One frame later, Mount Baker racked up five runs before sophomore Ava Jeretsky belted a solo homer of her own, extending their lead to nine. They closed it out in the bottom of the fifth with a 10th run.

Sophomore Lauren Valum finished 3-for-3 with a triple and an RBI. Cloninger batted 2-for-4 with 2 RBI as Jeretsky went 2-for-3 with 2 RBI. The Mountaineers moved on to a date with Lynden Christian in the semifinals.

The Lyncs’ bats were hot from the get-go, posting three runs in the bottom of the second. CPC responded with one in the top of the third, but that would be their only score of the game.

LC’s Megan Smit opened the flood gates in the top of the fourth. The senior beamed a three-run home run to start the inning, extending the Lyncs’ lead to five. LC got two more in the frame before they closed it out in the top of the sixth.

Smit finished the game 2-for-5 with 5 RBI, as eight other Lyncs batters had at least one hit. Senior Anna Engels picked up the win in the circle, as LC was set to face Mount Baker.

Relethford continued to cause trouble for opposing batters as she struck out 13 to help the Pioneers reach the bi-district championship game. The senior pitcher surrendered just four hits and didn’t walk any batters.

O’Bryan capped off the night for the Pioneers with a solo home run in the bottom of the fourth, as Blaine’s lone run in the top of the fifth wasn’t enough to extend the game.

This was by far the most exciting game of the day. While most games were lopsided one way or the other, the Lyncs and Mountaineers slugged it out in a contest neither planned to lose.

Mount Baker freshman Annalee Cohn scored the first run of the game. LC senior Claire Wiersma tied it up in the top of the third. Smit singled not long after to score junior Sharlotte Whittern, and the Lyncs wouldn’t trail the remainder of the game.

LC’s largest lead of the game came after a two-run home run in the top of the fifth from junior Karlie Korthuis, extending the Lyncs’ advantage to 9-2. In the second half of the inning, the Mountaineers shrank their deficit to two. Mount Baker’s dugout came back to life.

However, the Lyncs were determined to close it out. LC rattled off another two scores to start the sixth inning, and the Mountaineers weren’t able to get back on the board.

“I’m feeling really good,” Heystek said. “That’s the funny thing about softball, is it doesn’t matter how good or bad you are. As long as you do all the right things, no matter where the ball lands it’s kind of in the softball gods’ hands.”

Mount Baker has a long road ahead. Expect them to embrace that adversity on Saturday.

“It’s a tougher road, but we have a chance to write a pretty cool story,” Lepper said. “I told them about some of the things we’ve done here in the past, where we’ve had to make things up. Now we’ve got a chance to write another story right now.”

Lynden Christian will play Nooksack Valley in the 1A District 1/2 championship on Thursday, May 21, at 1 p.m. They will be on field one of Janicki Fields in Sedro-Woolley.

Mount Baker will play Granite Falls at 11 a.m. on Saturday, May 21, on field three to try and stay alive in the tournament.

The Trojans' season drew to a close following a difficult pair of games on Thursday. Meridian was unable to get much going offensively in either game, as their opponents simply had more firepower to work with.

Meridian finishes their season with a 3-18 record including regular and postseason. They will have 15 returning players next year, as the Trojans had only two seniors on the roster.