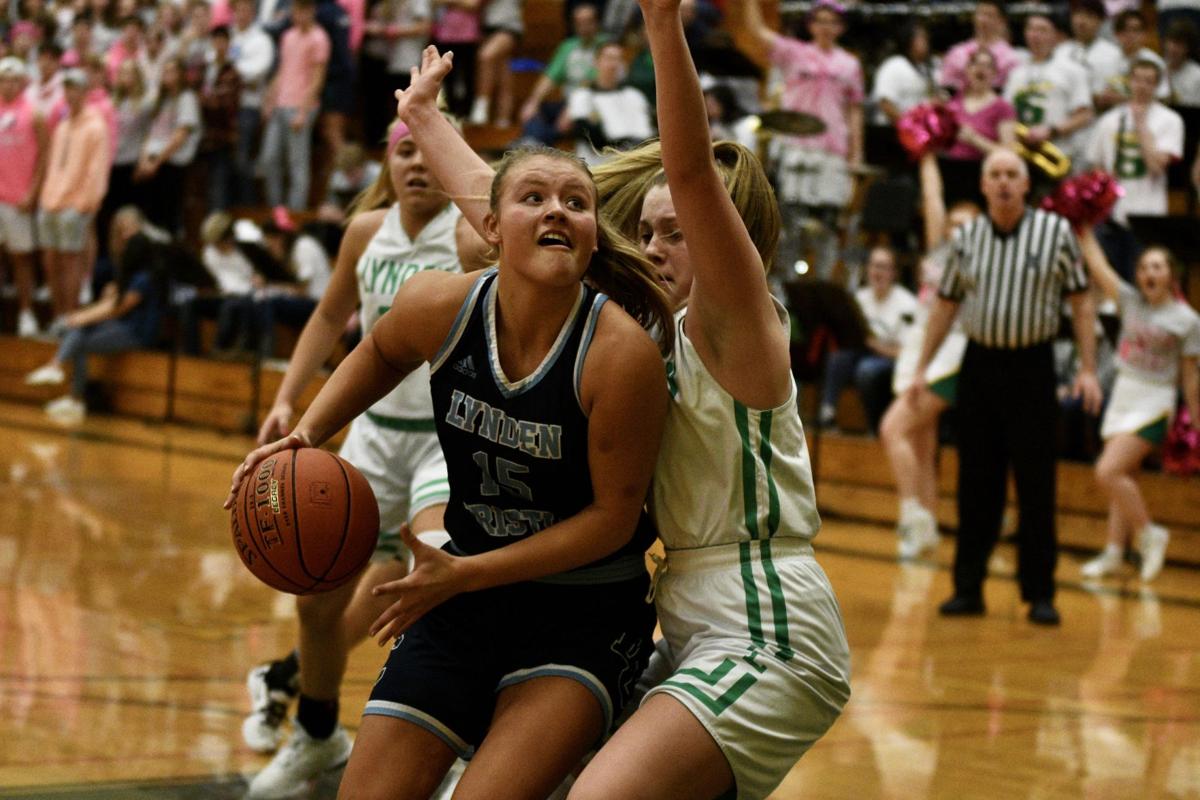 Senior Riley Dysktra scored a team-high 16 points for the Lyncs with seven of them coming in the final quarter. (Hailey Palmer/Lynden Tribune) 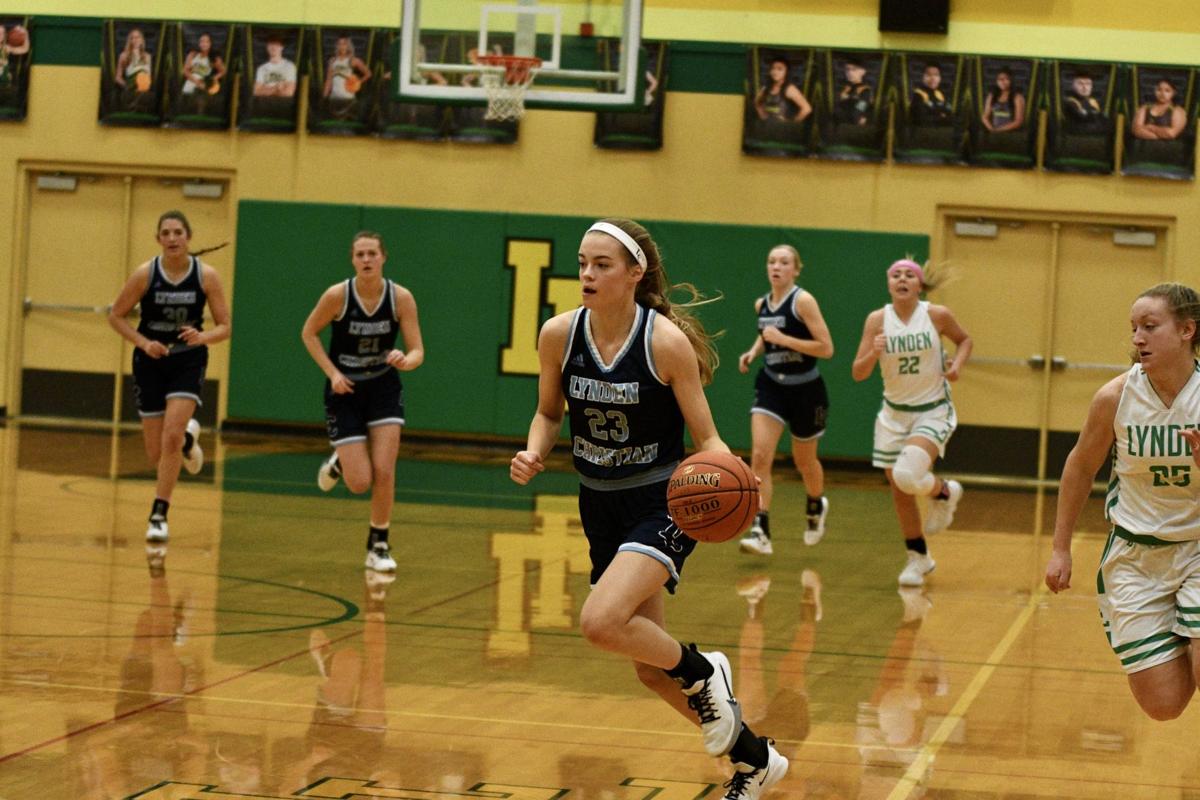 Junior Emily Mellema drives to the basket in the first half of LC's win over Lynden Thursday night. Mellema scored six points for the Lyncs. (Hailey Palmer/Lynden Tribune) 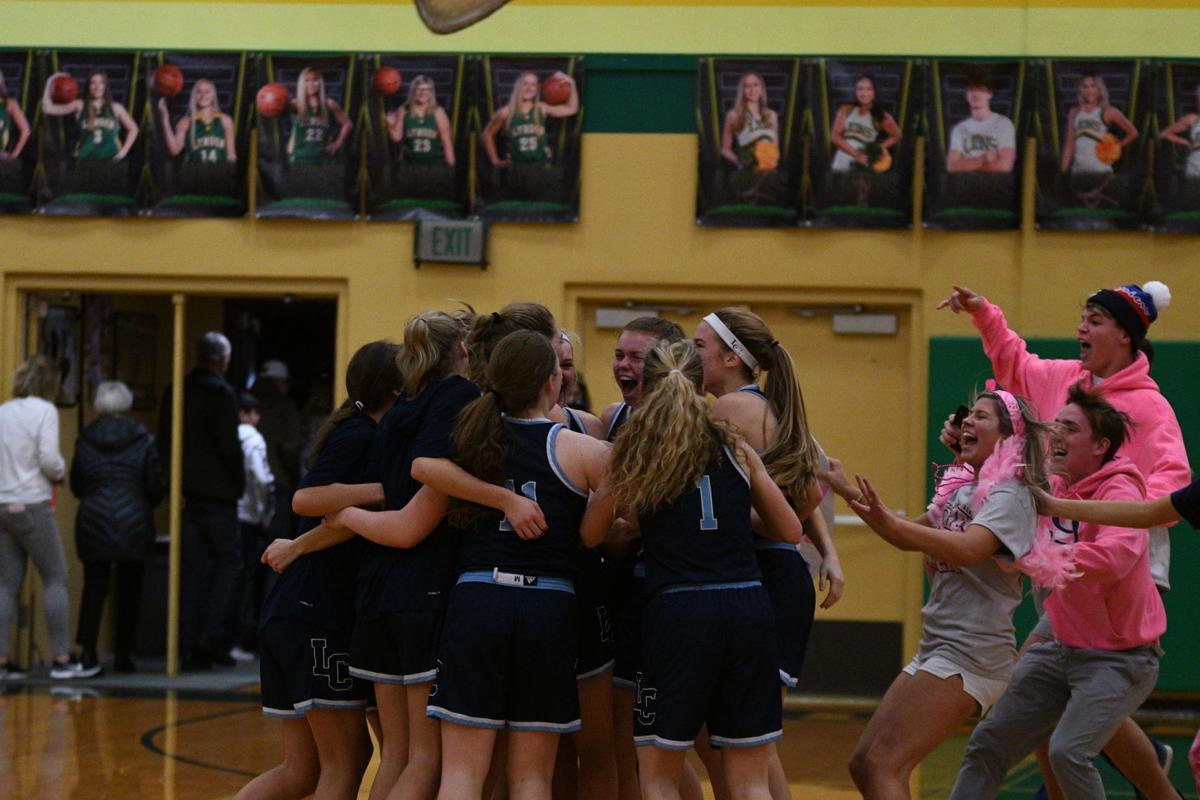 Lynden Christian celebrates its 37-34 victory over Lynden on the court after the final buzzer sounds. (Hailey Palmer/Lynden Tribune) 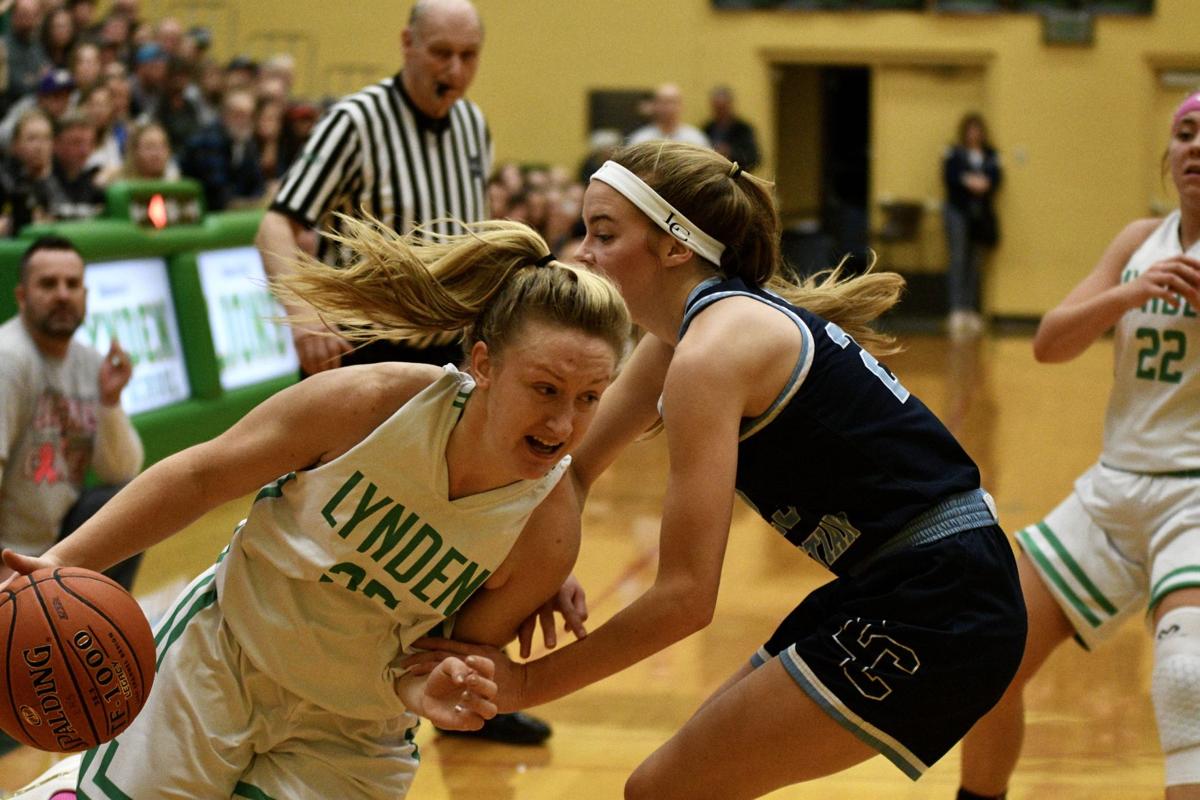 LYNDEN — Consider the hype lived up to.

The Lynden Christian and Lynden girls went down to the wire Thursday night at The Jake in front of a packed house.

Both teams came flying out of the gates in the first quarter with nerves getting the best of the Lyncs and Lions as each squad made uncharacteristic mistakes. Lynden Christian was able to find a few more quality shots than Lynden though and led 10-5 after one frame.

Free-throw shooting was a struggle for the Lions all night and likely the difference in this game. In the first half, Lynden was 3-for-14 from the charity stripe while the Lyncs went a perfect 8-for-8 and headed into the break with a 21-12 lead.

Lynden turned a corner coming out of halftime, scoring the first five points and holding the Lyncs scoreless for almost the first five minutes of the third quarter. The Lions’ defense tightened up, the offense started getting open looks and the Lyncs’ lead was cut to 23-22 going into the final eight minutes.

“We made some shots early, they made some shots in that third quarter and the place is rocking. It’s a one-point game, what more could you ask for?” Lynden Christian coach Brady Bomber said.

The Lyncs got their offense going again in the fourth quarter, but the dramatics certainly don’t end there with a crosstown rivalry.

Senior Ruby VanderHaak, who scored a team-high 11 points, drilled a 3-pointer to give the Lions their first lead of the game and the fans could be heard from Front Street.

Lynden Christian’s Riley Dykstra scored a game-high 16 points, seven of them coming in the final quarter.

Bomber said it was Dykstra who was able to bring some energy back into the Lyncs as the game was winding down.

“She got an offensive rebound, sealed and got another one,” he said. “We hadn’t scored in like 10 minutes and she made two huge plays that gave us life.”

The Lyncs and Lions had plenty of chances to break away in the final minutes, but in a game against the school down the street, it seems fitting that wouldn’t happen.

Junior Emily Mellema blocked a shot with 45 seconds left on the clock, Lynden Christian took possession and forced the Lions into fouling the Lyncs to stop the clock.

Mellema went to the line making the front end of the 1-and-1, but missed the second shot. With 19 seconds left in the game, the Lyncs led 33-31.

Sophomore Libby Stump went to the free throw line next for the Lyncs, making both ends of the 1-and-1 to put the Lyncs up by four with 16 seconds left in the game.

That’s when VanderHaak’s clutch 3-pointer came into play, trimming Lynden Christian’s lead back down to one with nine seconds left.

Stump ended up going back to the line for the Lyncs on the next possession, and again, made both 1-and-1 shots to give Lynden Christian a 37-34 lead.

“I try to make sure nothing goes through my mind [before the shots],” Stump said of her four late free throws. “I’ve figured out that’s the best thing, so I just say a prayer and hope it goes in.”

Mellema and Stump said the Lyncs had to shake off the tough third quarter and execute at the right times in the fourth.

“I’m really proud of us just being able to bounce back against the adversity. We fought through everything,” Mellema said. “We came together after the third quarter and I don’t think we ever lost our composure. Coming together as a team is big for us because we want to play tough and play together.”

Bomber made sure to give credit where it was due for the Lions.

“They’re as good a team as we’re going to play all year,” he said. “They’re well-coached as any team in the state. The crowd was electric, so for us it felt like a state semifinal game. Coming down to the wire, you’ve got to gut it out.”

The energy from the crowd could be felt all night, especially in the final minutes. For the coaches, there’s not much to do in the last few minutes except feel the moment with the crowd, watch and hope your team makes the big play.

“One part of you is really trying to sit back and think ‘What a cool game.’ You’re honestly trying to enjoy it,” Bomber said. “We’re trying to get our girls to dig deep and make one stop. At some point, your players go and make plays and you take a step back as a coach and hope they’ll get a chance to seize the opportunity.”

The Lyncs seized the opportunity and now have a direct path to the Northwest Conference title if they continue to roll through their next three games before districts.

For Lynden, dropping a game as close as this one to the Lyncs only helps them prepare for a postseason run.

“It’s a lot like the postseason and gets us ready for it,” VanderHaak said. “Now we know what we need to do.”

Lynden Christian will hit the hardwood again on Saturday for a conference matchup at Squalicum at 6 p.m.

The Lions will look to bounce back on Saturday as well against Burlington-Edison at home at 5:40 p.m.