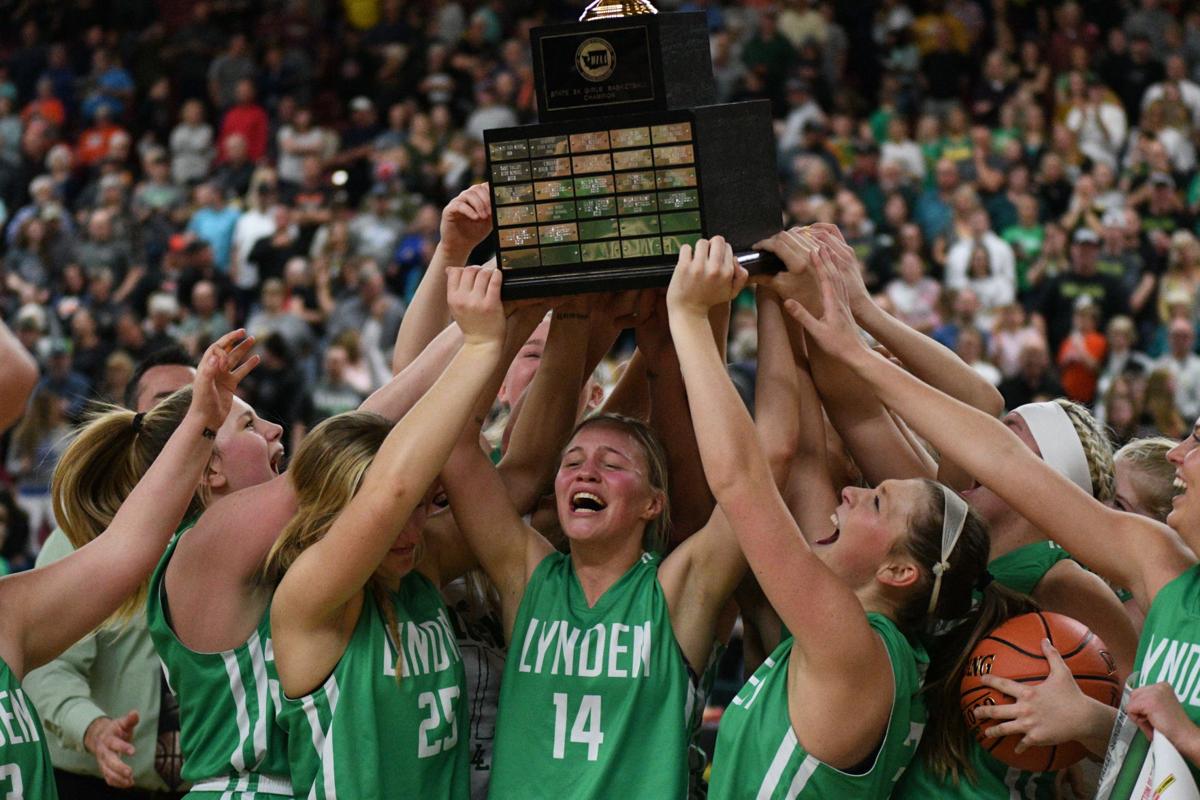 The Lions celebrate on the court after defeating West Valley Spokane in the state championship. (Hailey Palmer/Lynden Tribune) 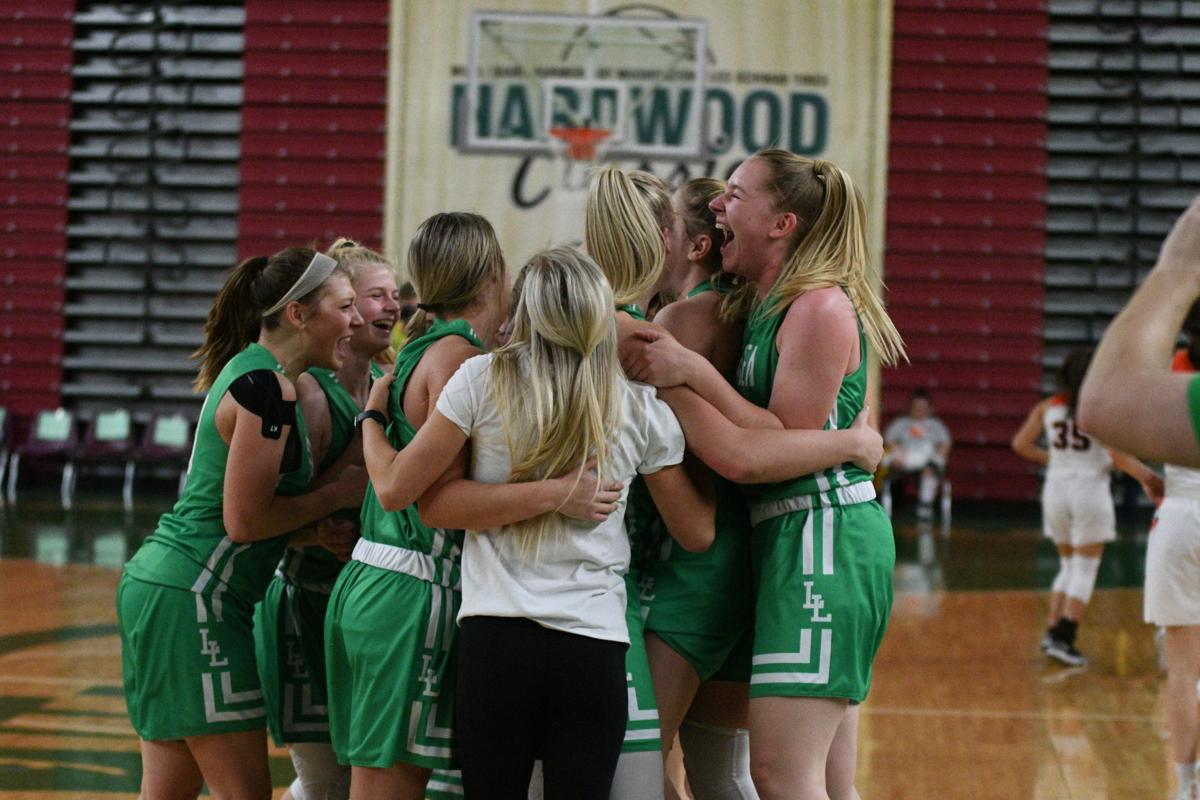 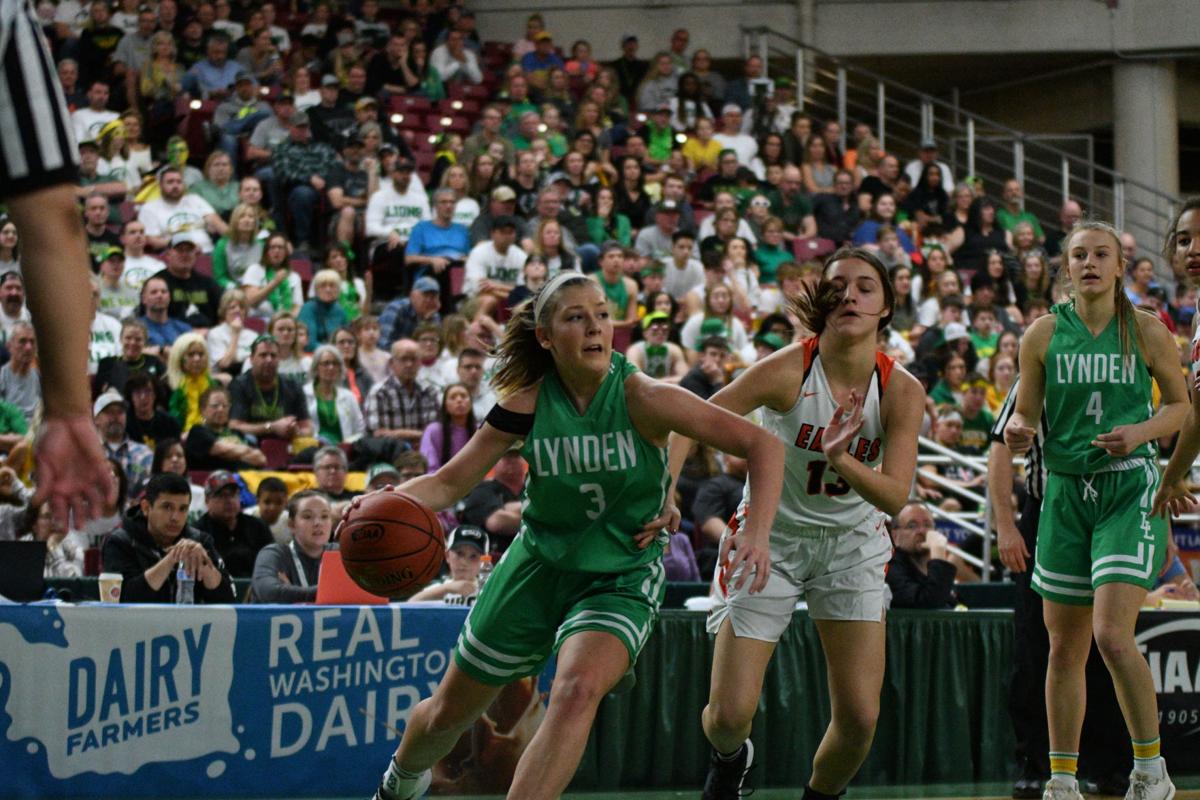 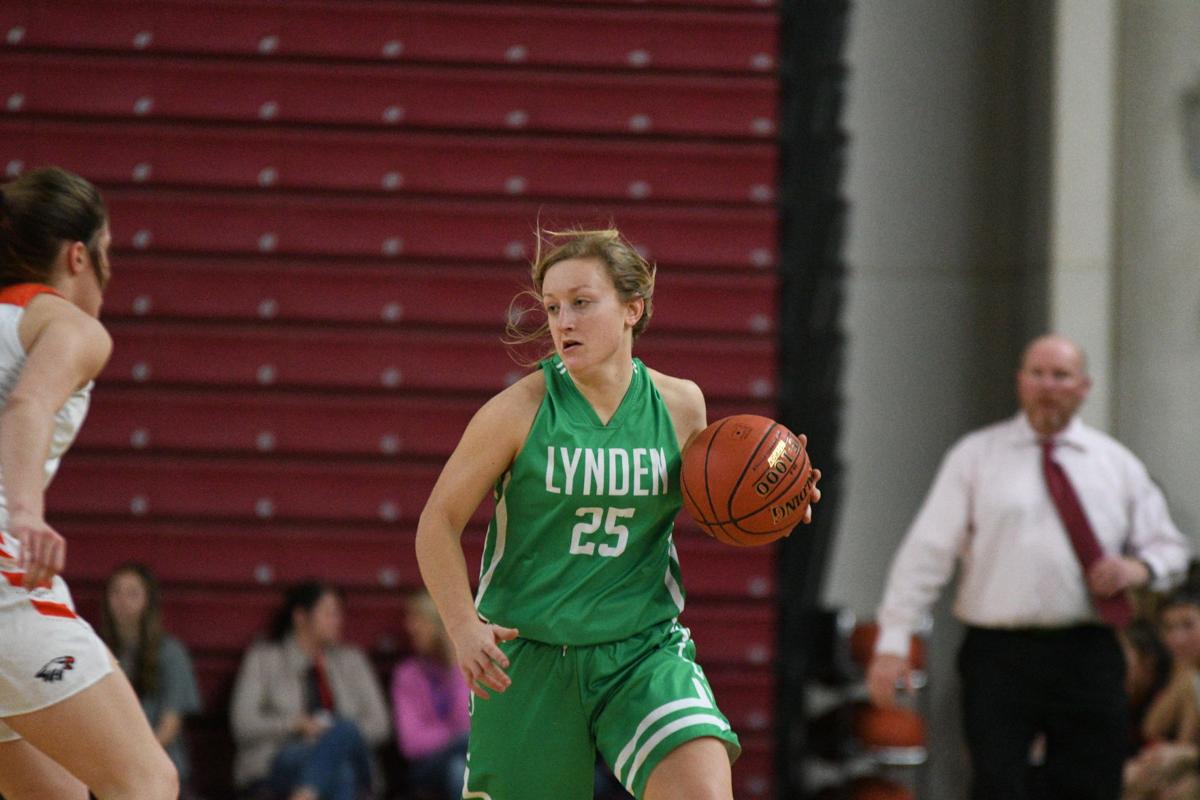 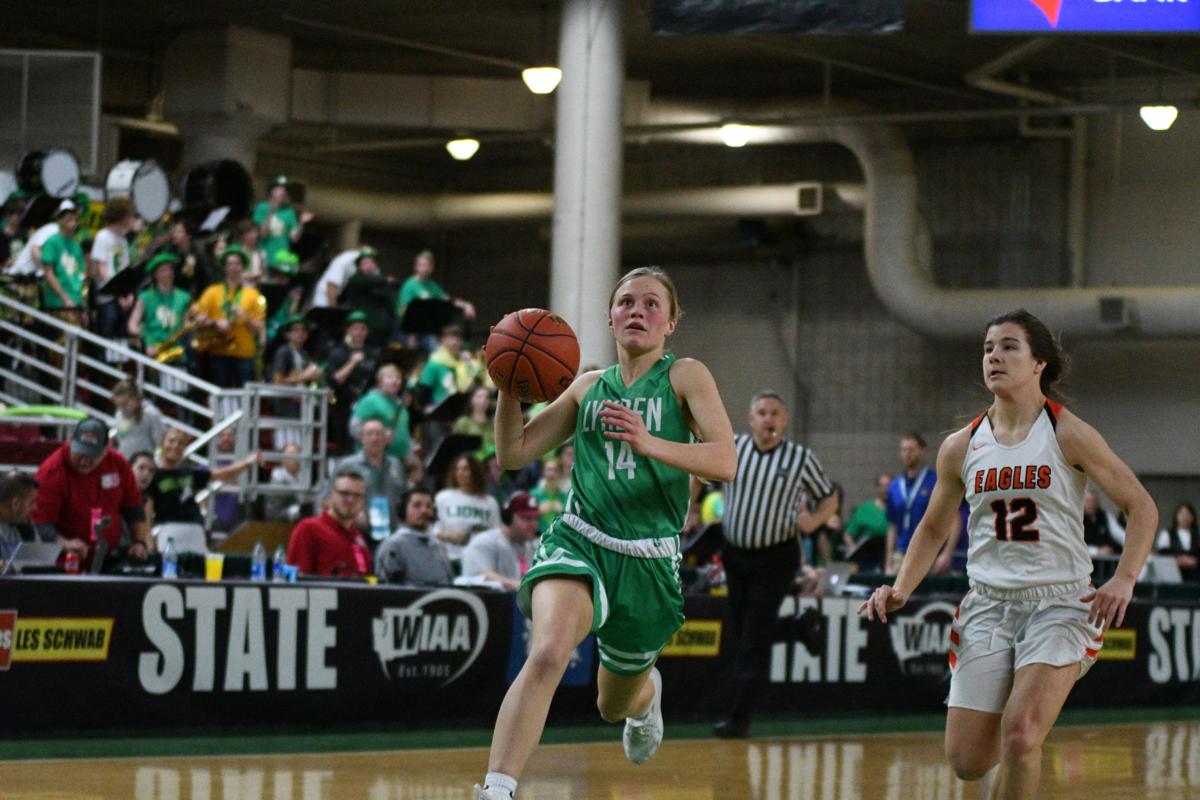 YAKIMA — Lynden senior Liv Tjoelker said at the end of the regular season a month ago the Lions would be getting the gold ball at the state tournament. That proved to be true as the Lions captured the Class 2A state title with a 60-38 win over West Valley of Spokane Saturday evening.

The Lions and Eagles had just met a week prior in the district championship which Lynden won 48-36.

Tjoelker said it didn’t make a difference to her if they played a team they’ve played before or not.

“Whoever is in the other color jersey we’re going to play with our best effort,” she said.

The offense struggled in the second quarter with Tjoelker and VanderYacht in foul trouble and only found the hoop once on a layup from junior Faith Baar.

Lynden coach Rob Adams said the risk of keeping Tjoelker and VanderYacht in the game with two fouls each wasn’t worth the reward of possibly putting more points on the board.

“Some of the stuff we had success with in the first quarter we couldn’t run in the second quarter because of the personnel on the floor,” he said. “ The gamble was can we make it ugly and still defend with the idea we don’t give up a lead and get into halftime with Liv and Anna with only two fouls each and not have to play them anymore? We were able to accomplish that.”

Although the offense was held to only two points in the quarter, the Lions’ defense was absolutely shutting down the Eagles on the other end of the floor. West Valley scored three points in the second quarter and the Lions took a 20-15 lead into halftime.

“We struggled a little offensively, but it wouldn’t be a Lynden Lions playoff game if we didn’t struggle offensively,” Hershey said.

With Tjoelker and VanderYacht back on the floor to start the second half, Lynden was able to get its offense going again and it came out in a big way.

Hershey scored the first five points of the third quarter and the Lions lead was back up to double digits.

“She’s one of the best I’ve ever had in 13 years,” Adams said of Hershey. “She’s a complete basketball player and fun to coach.”

Hershey said despite having their most inefficient offensive quarter of the state tournament, Adams told them they had to get back to playing their game.

The Lions outscored the Eagles 20-8 in the third quarter, matching their entire scoring total from the first half.

“We had no flow offensively [in the second quarter],” Hershey said. “Getting back into our groove and the start of the third quarter pushed us.”

Lynden had a comfortable 17-point lead heading into the final quarter and the offense kept firing until Adams began to pull the starters with about two minutes left in the game.

“These guys have really been working on writing their own story and the story ended the way they wanted it to,” Adams said.

“When we needed them to play tonight they played really well and what a great way to end their career,” Adams said. “They came in as state champions as freshmen and ended their career with a state title. Twice in four years is pretty cool. I’ve been so appreciative and thankful for their determination and loyalty to our basketball program.”

It’s the third state championship in program history for the Lions, all have come with Adams at the helm.

We’ve waited our whole lives for this and I couldn’t have asked for a better senior season,” she said. “I’ve put in a lot of time and effort. Hard work pays off.”

Hershey said it was all a little bittersweet for her.

“It’s great to win it, but you always want one more game,” she said. “I’d go play one more tomorrow.”

Lynden held the top ranking in the state for the entire season and will finish there as well with a 26-1 record.