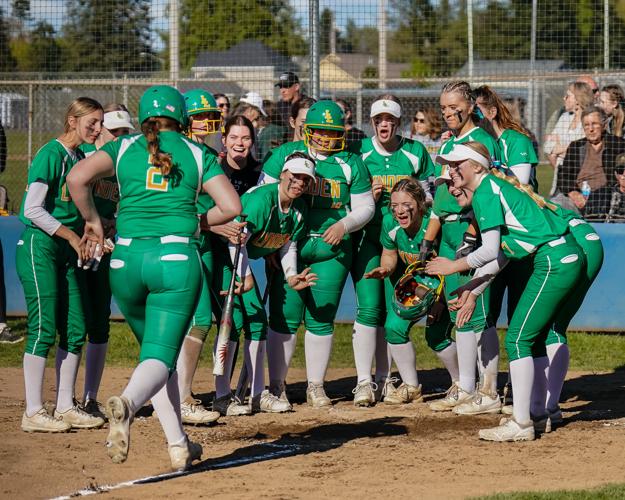 Lynden celebrates Ashlyn Alexander's second home run of the day in the Lions' 14-1 win over the Lyncs on Tuesday, May 10. (Dennis Cairns Photography for the Tribune) 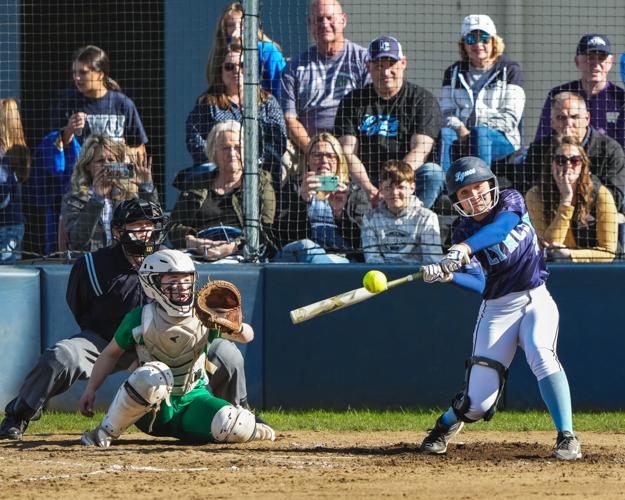 LC's Kenadi Korthuis puts a ball in play as Lions catcher Grace Potter looks on in the Lyncs' 14-1 loss to Lynden on Tuesday, May 10. (Dennis Cairns Photography for the Tribune) 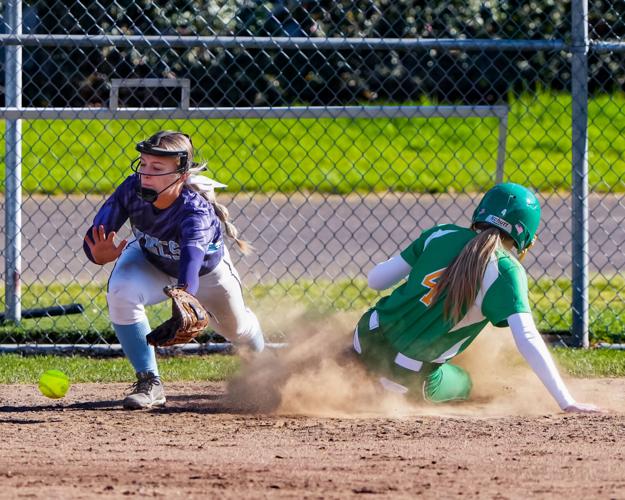 Lynden Christian's Karlie Korthuis (left) tries to corral a throw as Lynden's Kaitlyn Kalma slides into 3rd base in the Lions' 14-1 win over the Lyncs on Tuesday, May 10. (Dennis Cairns Photography for the Tribune) 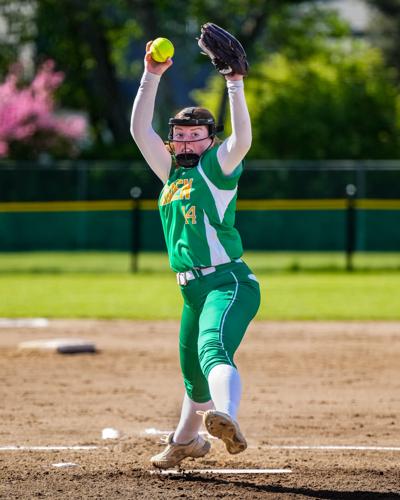 Lynden's Emma Ramerman struck out three LC batters in four innings pitched in the Lions' 14-1 win over the Lyncs on Tuesday, May 10. (Dennis Cairns Photography for the Tribune) 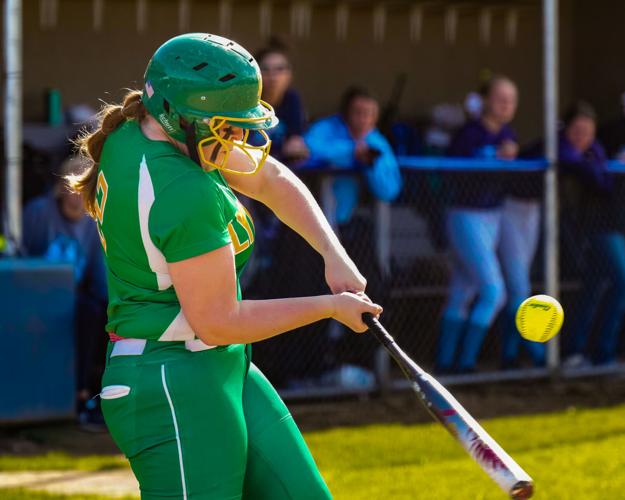 Ashlyn Alexander connected for two home runs on the day in the Lions' 14-1 win over the Lyncs on Tuesday, May 10. (Dennis Cairns Photography for the Tribune)

Lynden picks up up nine runs via homers, defeats LC 14-1 in five innings

LYNDEN – Winning the annual rivalry game between Lyncs and Lions always feels good, but it’s even better when it’s for a share of the Northwest Conference title.

“We came into this game knowing we had to win,” said Lynden senior Ashlyn Alexander after the 14-1 win. “We all came out; knew we had a job to do, and we got the job done.”

Lynden enters a three-way tie for the league’s top spot with Nooksack Valley and Sedro-Woolley, all finishing 13-1 in conference play.

“That’s a special thing, we haven’t done it that many times,” said Lynden head coach Ed Bomber. “I’m really happy for them to accomplish that.”

She finished 4-for-4 at the plate on the night, fueling the Lions’ win alongside junior Chloe Wittenberg who drilled a grand slam in the top of the second. Wittenberg finished 2-for-3 batting on the evening.

“We knew we had to win and get after it,” Wittenberg said. “It wasn’t going to be easy or handed to us.”

Lynden already possessed a 3-0 lead after the first inning before pouring on nine runs in the second. The Lions cycled through their batting order, racking up 10 hits in the top of that inning alone.

“Our batting, that’s one of our strengths,” Alexander said. “We spent a lot of time in the fieldhouse before the season and during the season and I think it’s obvious that hard work is paying off.”

Lynden Christian’s lone run came on an RBI single in the bottom of the first by junior Maclay VanSoest, scoring senior Megan Smit. VanSoest, Smit and junior Sharlotte Whittern were the bright spots for LC, each finishing 2-for-3 at the plate.

The Lyncs weren’t far behind the Lions’ efforts batting, recording 9 hits to Lynden’s 14. The three home runs are what made the difference in the game.

“My girls did great, we got on base,” said Lynden Christian head coach Brooke Heystek. “We had maybe nine people get on base, and we just couldn’t get them home.”

Lynden senior pitcher Emma Ramerman picked up the win in the circle, striking out three Lyncs in the process through four innings. Senior Claire DeVries closed the game out for the Lions, pitching the fifth and final frame.

DeVries also went 3-for-3 batting on the night, adding four runs to her stat line.

The Lions finish their regular season 14-3 overall (13-1 NWC) as they look toward the 2A District 1 tournament that begins Friday, May 13, with play-ins. Their opponent, game date and time are yet to be determined.

Getting the opportunity to play in her first-ever district tournament — and the first one held since 2019 — has Wittenberg excited for what’s to come.

“I’m just excited for the feeling,” she said. “I’m excited to be there with these girls, have a good time and see what we can do.”

Bomber said the team has to work on the things they have full command of entering the postseason.

“I’m expecting them to understand that we need to prepare to play well,” Bomber said. “That’s all we need to focus on. That’s what we can control.”

LC will have one more regular-season game on Thursday, May 12, when they visit Squalicum at 5 p.m. The Lyncs fell to 8-9 overall (5-8 NWC) with the loss. Heystek said the team is right where they need to be, performance-wise, to be prepared for their postseason run.

“I think if we just keep our bats hot and we do all the right things on defense, we’ll be all right,” she said. “They can do it; they’ve just got to flip the switch.”