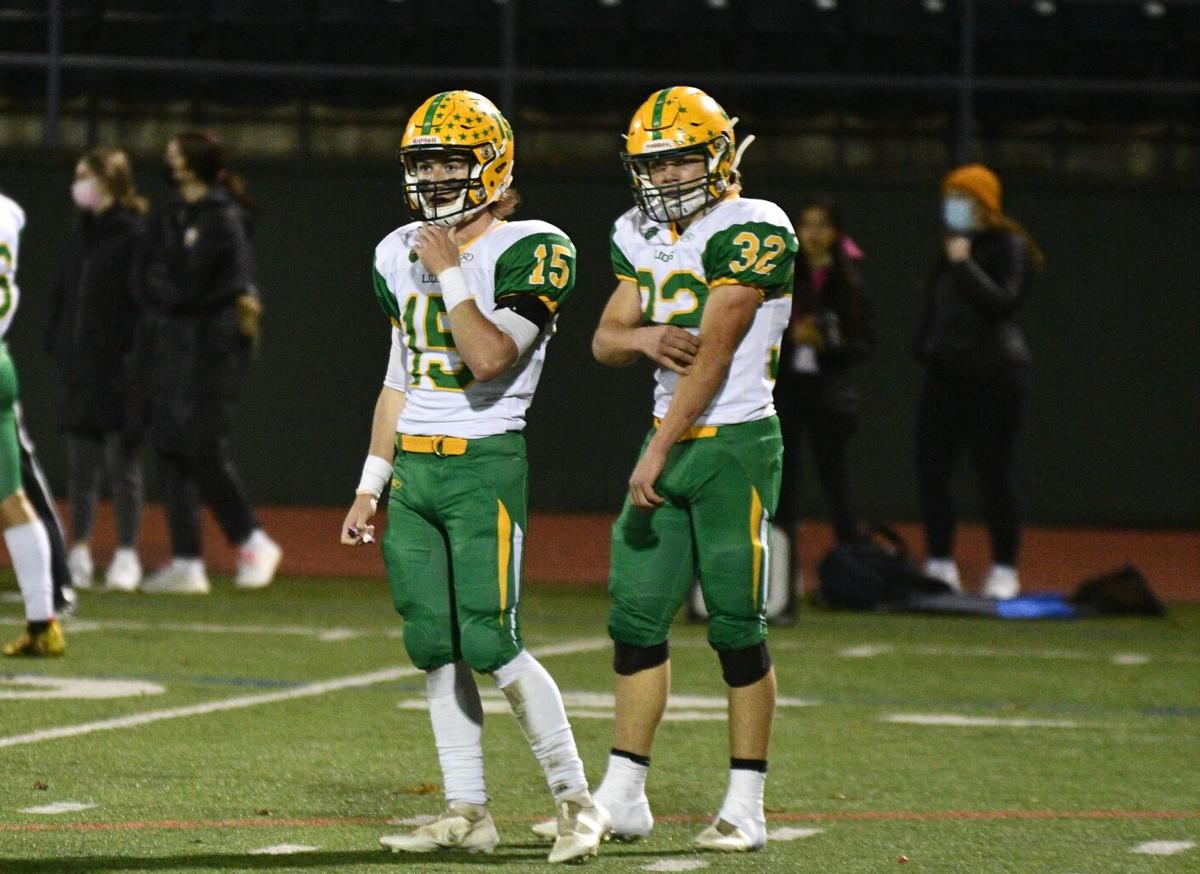 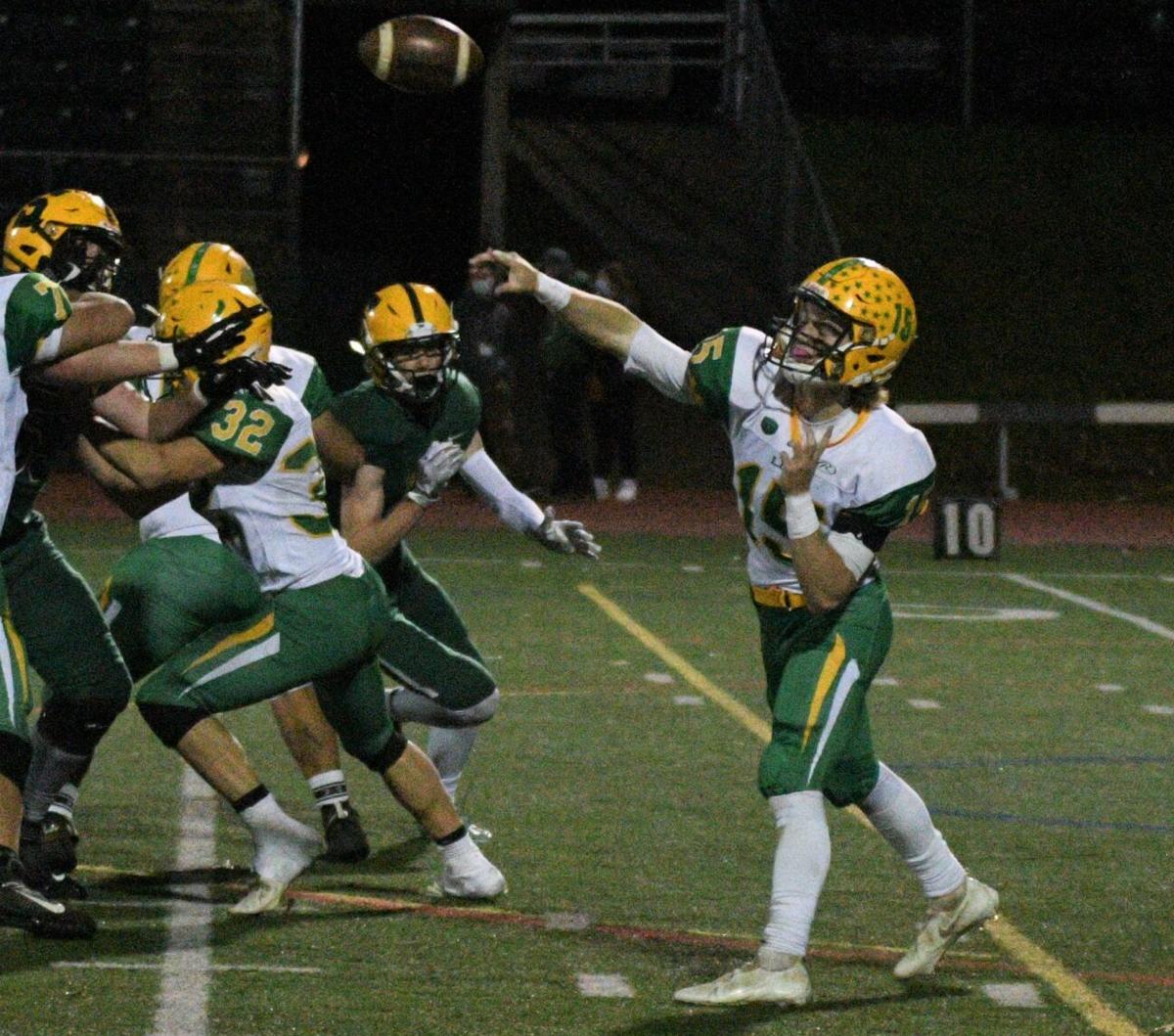 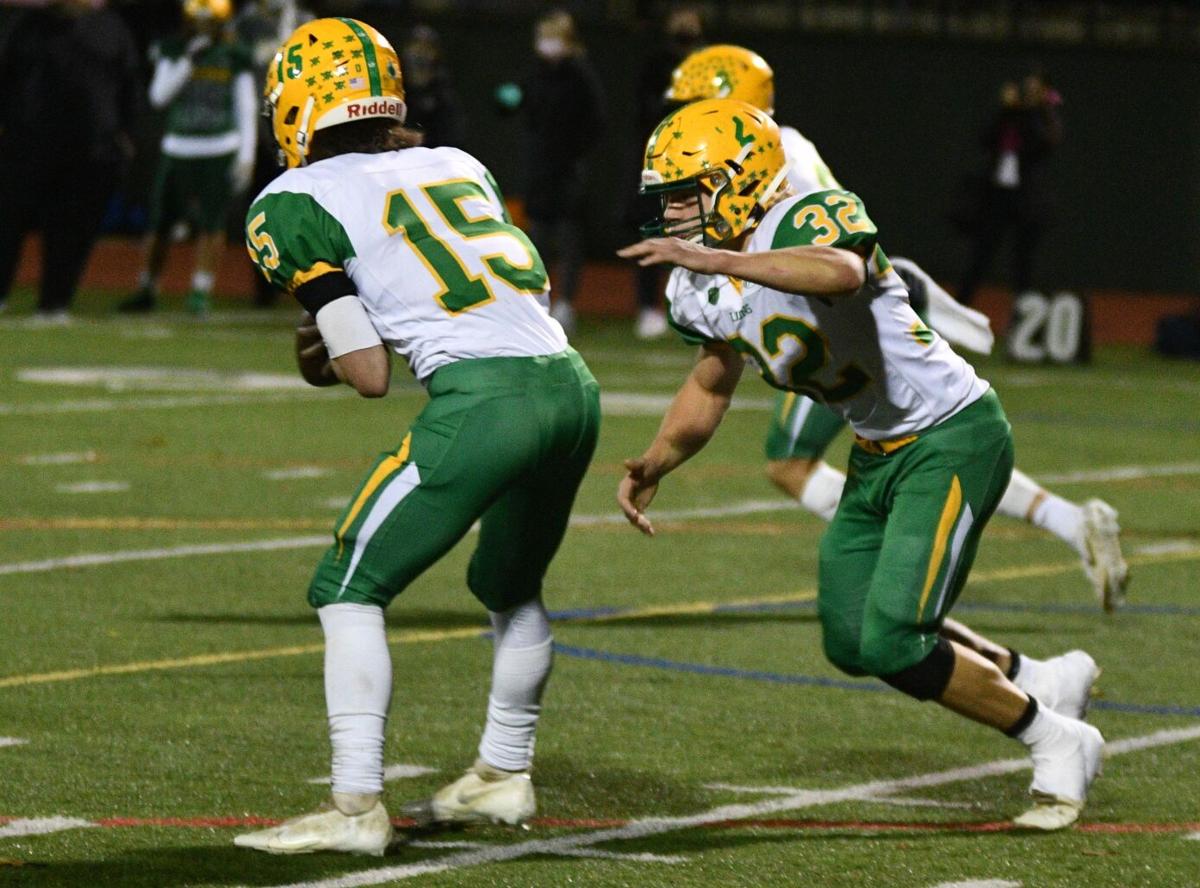 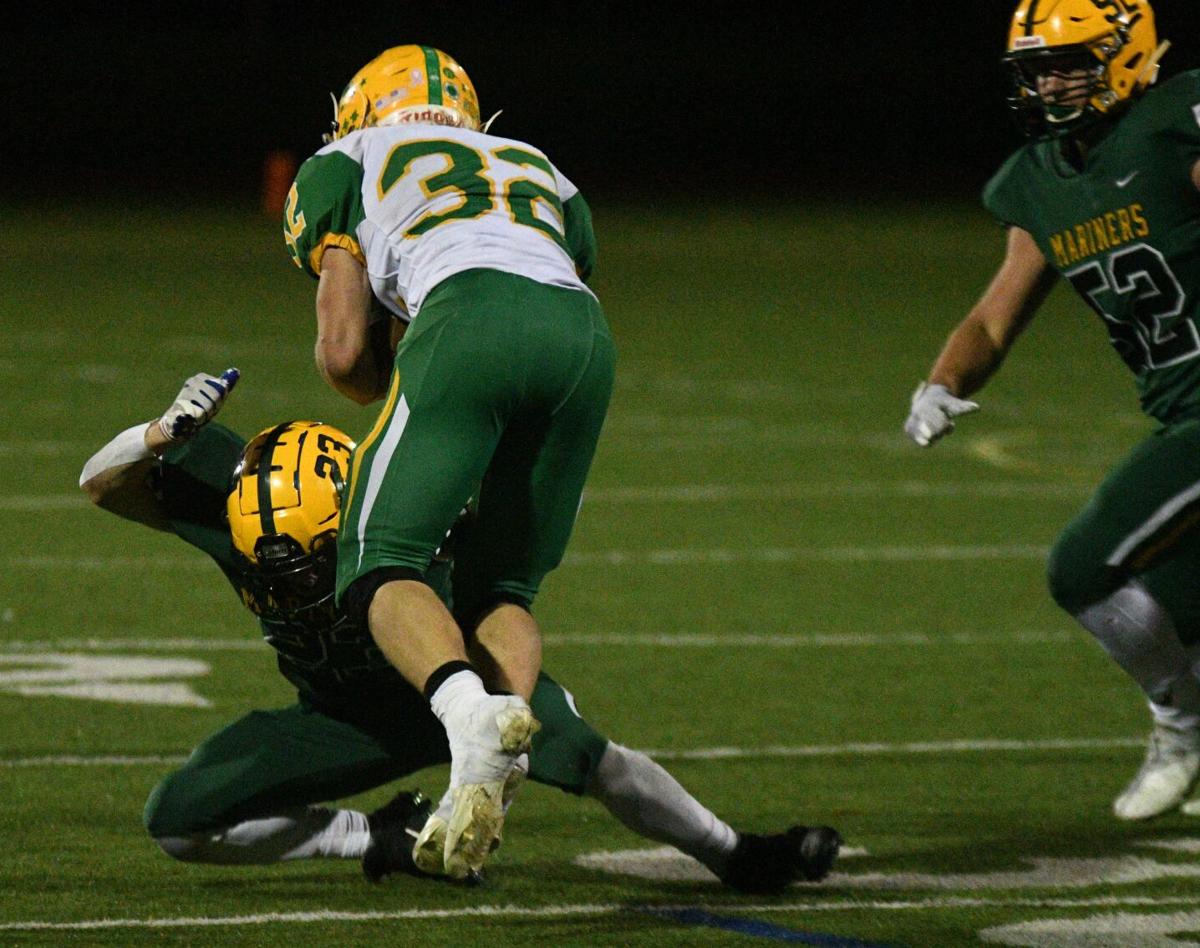 Lane Heeringa (No. 32) trucks through a Sehome defender in the Lions' 23-7 win over the Mariners on Friday, Oct. 15. (Connor J. Benintendi/Lynden Tribune) 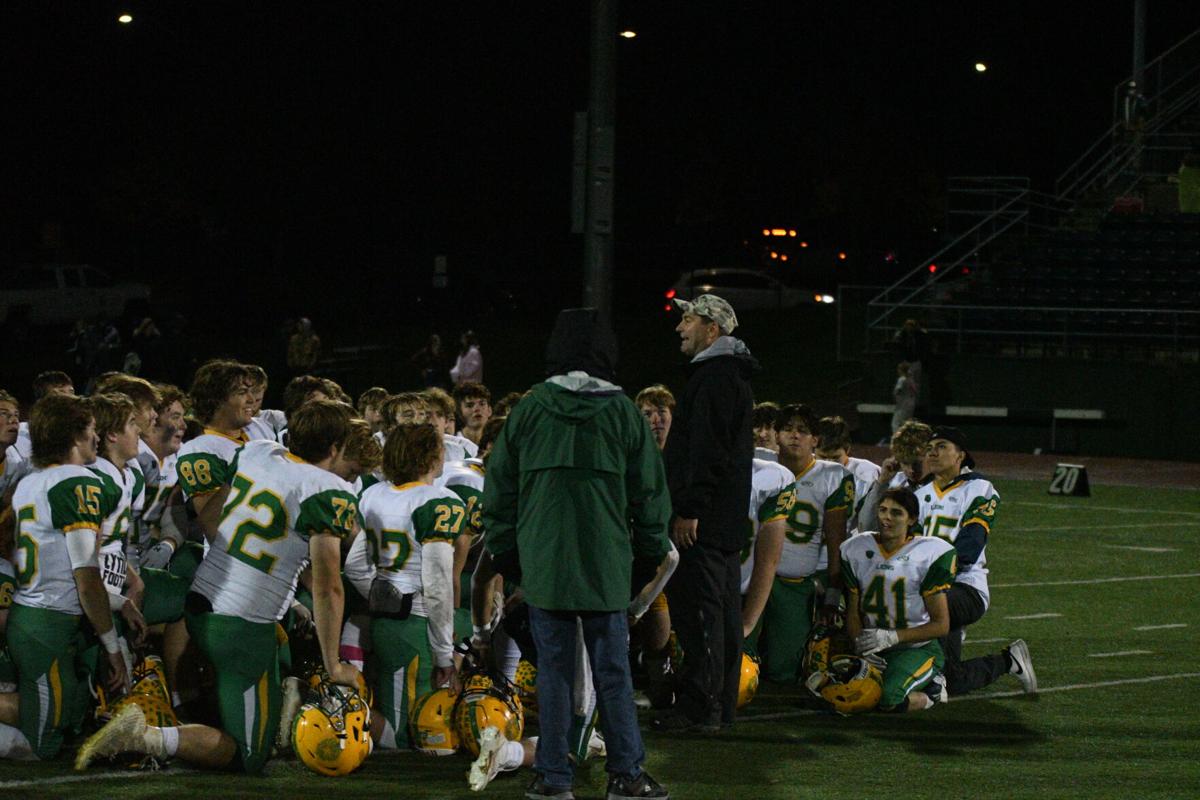 *All player stats in this article are courtesy of whatcompreps.com

The leaders of that offense? The Lions’ current varsity backfield duo of quarterback Kaedan Hermanutz and running back Lane Heeringa.

“I was able to watch them on JV, literally — no offense — tear it up,” said Blake VanDalen, Lynden’s head coach. “Lane and Kaedan, specifically, they were tornados on JV. Those were blowouts.”

Both juniors, Hermanutz and Heeringa are a big reason why Lynden just secured the 2A Northwest Conference title on Friday night, defeating Archbishop Murphy 38-14.

The Lions are now 7-1 on the season and 5-0 in their league contests. They have won their last six in a row.

This exceptional run toward the conference’s top spot has been long in the making for the duo — even before they took JV by storm.

Heeringa moved to Lynden from San Diego when he and Hermanutz were in seventh grade.

The two became friends almost right away but didn’t share a football field until they were freshmen.

“Coming into freshman year we knew we were going to be back there together,” Hermanutz said. “I think it just helped a lot that we were friends beforehand because it makes it fun in the backfield.”

That chemistry has built over time. It became crucial heading into this season, as both Hermanutz and Heeringa were moved into starting roles on the Lions’ varsity roster.

Lynden played six games in the 2020 abbreviated season. Starting quarterback Baylor Ayres and running back Caleb Wheeler were both seniors. Two of the roster’s most important positions were about to be up for grabs.

“To be honest, not really,” Heeringa replied when asked if he anticipated receiving most of the team’s carries this season. “I knew I was going to play, but yeah, [it’s been] definitely a lot more than I expected.”

Heeringa added that he has “definitely grown” as a runner since week one. VanDalen said he couldn’t wait to watch Heeringa play this year after his performance last season.

He has taken the “lions-share of the carries,” as VanDalen put it, and Heeringa has two games this season scoring a pair of touchdowns. His largest rushing total of the season was in week four against Burlington-Edison, when he tallied 148 yards on 28 attempts.

A tough runner on offense, Heeringa also displays his physicality on defense.

He starts at linebacker for Lynden as well, and currently has the second most solo tackles on the team behind senior Taivin VanDalen. Coach VanDalen advised Heeringa before the season that he will be playing the two most physical positions on the field.

“There’s only a handful of kids in Lynden history that we’ve allowed to do that because it is so physical,” VanDalen said. “We usually make them do offense or defense; running back only or linebacker only.”

Hermanutz shifted fully to quarterback upon assuming the starting role this season. He had played some defensive back last year but made the shift to reduce his chance of injury.

During the summer, Hermanutz was recovering from shoulder surgery that kept him on the sidelines for most of the team’s activities. He was always there; he just couldn’t compete in a full capacity.

There was a quarterback competition heading into the season between Hermanutz and senior Max Moore. However, VanDalen generally likes to deploy a multi-quarterback system. They both knew they would see the field regularly, regardless of the outcome.

“I think we were both totally fine with that,” Hermanutz added. “I like having him out there and I think he was okay with having me out there. We just tried to play off each other … It’s competition, but it makes us better and definitely didn’t break us apart.”

In the Lions’ season opener against Hockinson, Hermanutz was trying to find his footing. He rushed for a score, threw for one, but also three interceptions in the 24-21 win.

The coaching staff was right there to help him shrug it off and provide reassurance. To say he bounced back from a rocky first start passing the football would be a severe understatement.

“I just tried to flush it, really, and focus on the good things – just try to build off those,” Hermanutz said. “If you worry about the picks, it’s just going to get to you, right?”

Since week one, Hermanutz has since accumulated a 13-3 touchdown-interception ratio while rushing for four more scores. His best passing performance of the year came in week six, tossing five touchdowns and racking up 208 yards through the air.

The trust these Lions have in one another builds every week, Hermanutz said. While the whole team has had a hand in Lynden’s success, it’s special watching the junior backfield duo grow into their roles simultaneously.

“[Heeringa] makes a good play, you pat him on the back and say, ‘good job’ and then vice-versa,” Hermanutz said. “We just try to make each other feel better and get ourselves better even when we’re back there.”

Both players had high praise for their coach as well. It’s apparent the culture that VanDalen cultivates within his program stretches beyond the football field.

“I feel like he’s my uncle or something, [it’s] like I’ve known him my whole life,” Heeringa said. “He’s just a really good guy. I trust him, I’ll go to him if I ever need anything.”

Hermanutz echoed that feeling. He explained the importance of VanDalen keeping a close connection with his players to help everyone grow together.

VanDalen emphasized the evolution of his team’s cohesion and connection to each other.

“We just love to go to battle together, and this group, it’s one of our tightest groups. These kids love to spend time together,” he said. “That gives a coach great joy, right? It’s fun to coach kids like that talent-wise, but it’s even better when they also are great kids.”

The Lions will close out their regular season against Sedro-Woolley (5-2 overall, 2-2 NWC) this coming Friday, Oct. 29 at 7 p.m. Hermanutz, Heeringa and the rest of the Lynden roster will look to keep a good thing going heading into the postseason.