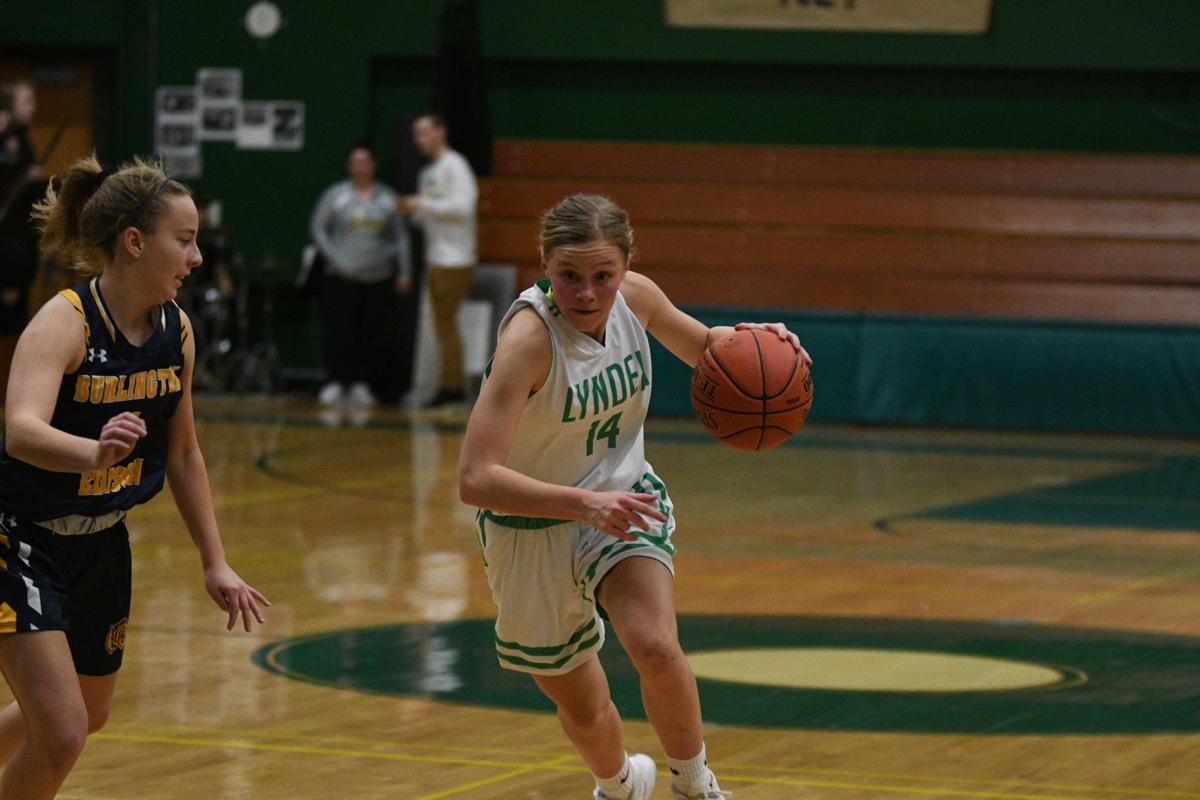 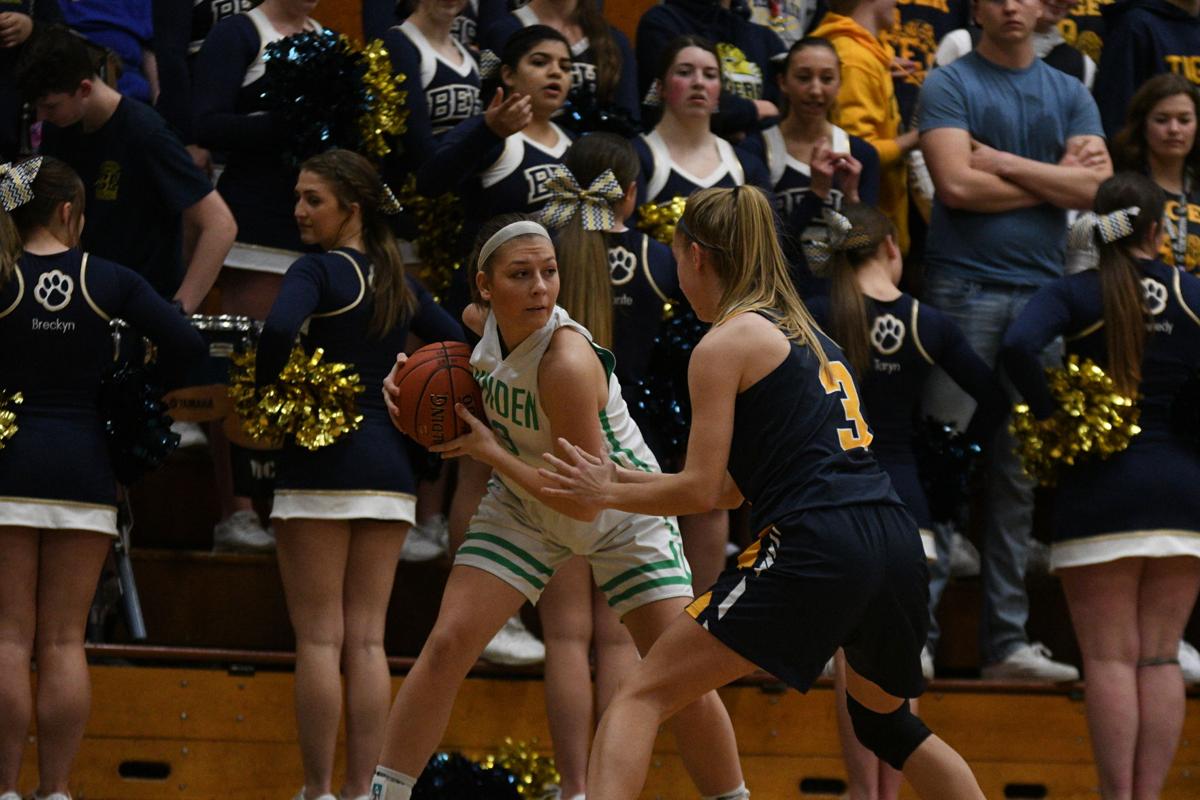 Senior Liv Tjoelker dished the ball out to her teammates all night, tallying a team-high seven assists. (Hailey Palmer/Lynden Tribune) 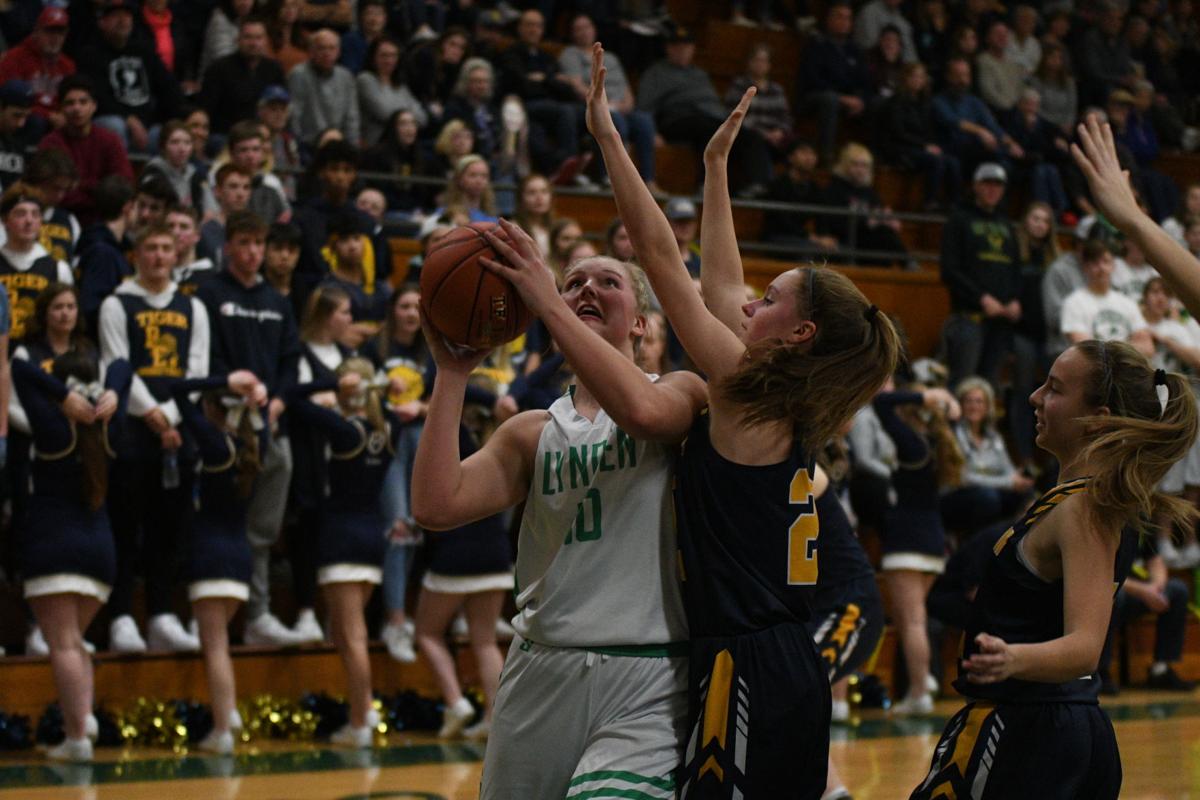 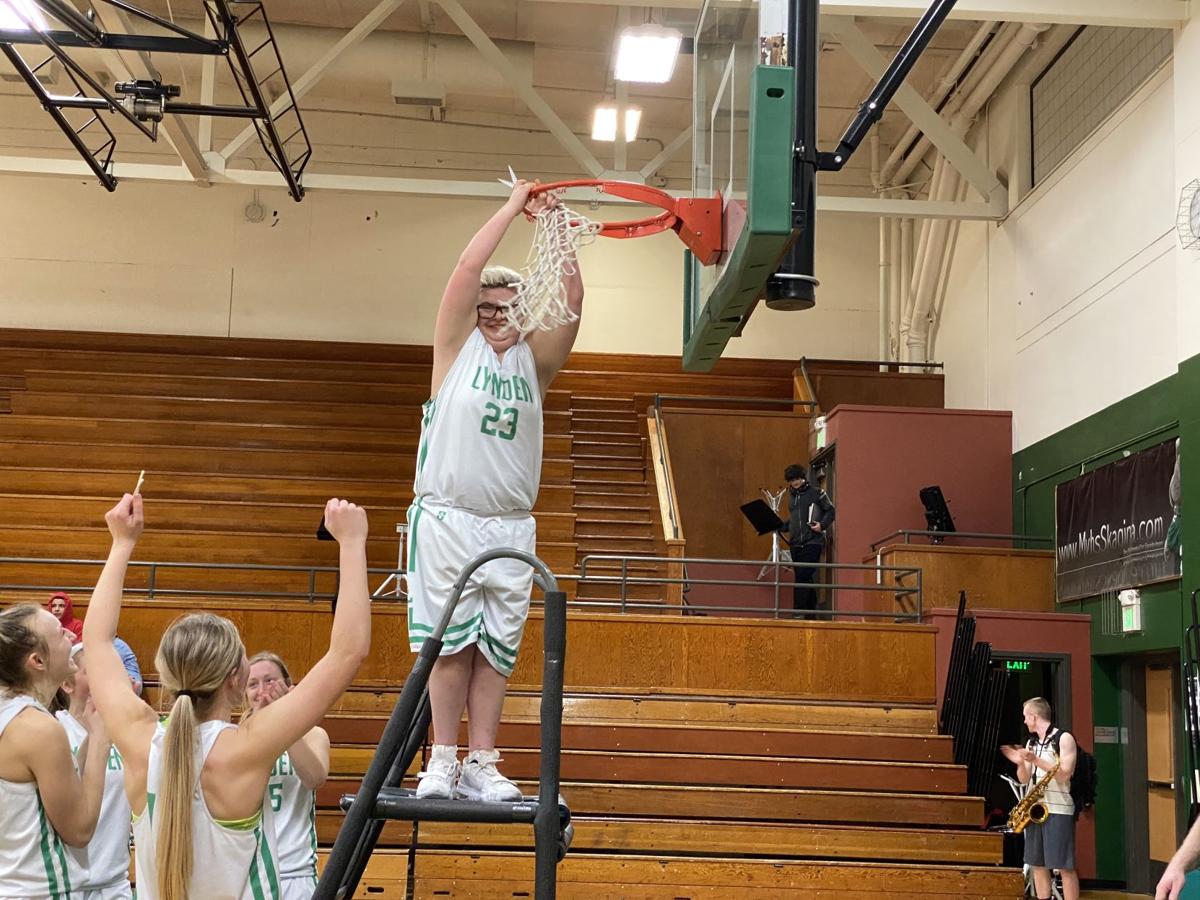 Senior Ashtyn VanDalen cuts down the last piece of the net after the Lions' win over the Tigers. (Hailey Palmer/Lynden Tribune)

MOUNT VERNON — Cutting down the nets was just a small part of a larger goal for the Lynden girls basketball team. The Lions moved past Burlington-Edison 67-44 Friday night to take the District 1/2 championship.

It was apparent from the start the Lions wanted to make a point on defense. The Tigers didn’t score their first basket until nearly five minutes into the game.

Lynden held a 13-8 advantage after the first quarter and the offense started to pick up the pace in the second to give the Lions a 33-18 lead at halftime.

“They’re so talented and we caught them probably not on their best night,” Lions coach Rob Adams said. “We know they’re better and a state-worthy team. We would like to think we had something to do with that, but it was just a fun environment for our kids.”

Senior Keylie Hershey was flying all over the court which led to a team-high 20 points scored to go with five steals. Senior Ruby VanderHaak added 14 points and junior Faith Baar contributed 12 and 10 rebounds for a double-double.

Hershey’s first basket of the night didn’t come until nearly halfway through the second quarter. When the shots aren’t falling, her approach stays the same.

“Shooters keep shooting,” she said. “You have to have amnesia when you shoot and think the next one is going to go in every time you shoot it.”

Coming out of the break, the Lions rattled off an 11-0 run on offense and continually forced the Tigers into bad shots on the other end of the floor.

Lynden held Burlington-Edison to just five points in the third quarter while scoring 16 of its own.

Taking away Burlington-Edison’s Katie King was a focus for the Lions on defense. Actually, the Lions wanted to take away the whole team, Adams said.

Hershey also gave credit to the talent the Tigers have on their roster.

“[King is] a solid player all around,” Hershey said. “They just have really good guards on their team. They’re fast and can all shoot. It’s kind of like a run-and-gun type of team and their defense is incredible.”

Adams said the win was a complete team effort on both sides of the ball from the Lions against a talented team.

“I thought tonight we played with a lot more flow," he said. "We shared the ball and pushed the ball up the floor. Burlington-Edison might be faster than we are 1-12 and we were still able to push the ball up the floor which takes a lot of heart because they’re playing so hard defensively. They executed the game plan perfectly.”

Since Lynden’s only loss of the season to Lynden Christian nearly a month ago, the Lions have now won seven in a row.

Adams said it was that loss to the Lyncs that woke up the team and made them realize they want to accomplish more than winning the crosstown rivalry this season.

In that loss, Lynden left more than 10 points on the board with missed free throws which likely decided the game. The Lions only shot 50 percent from the free-throw line against Burlington-Edison, but have been more consistent at the charity stripe in their last few games.

“I think I have a group of young ladies now that the postseason is upon us, it sharpened their focus a little bit,” Adams said. “It was getting beat by LC in such a big environment. That hurt and really stayed with them. We have big goals and in order to get those goals we had to shoot better from the free throw line and they’re doing that.”

From the player perspective, maybe the Lions just don’t like extra running.

“We run a lot at practice when we miss our free throws, so I think it’s always in the back of our head hearing coach say ‘Get on the line and do 24 down and back,’” Hershey said.

Coming up for the Lions is the regional round of the state tournament next weekend. The time, location and opponent is still to be determined as the rest of the district tournaments play out this weekend.

That bigger goal Adams was talking about is obvious. It’s winning a state championship. For the Lions to do that they just need to do one thing the rest of the playoffs.