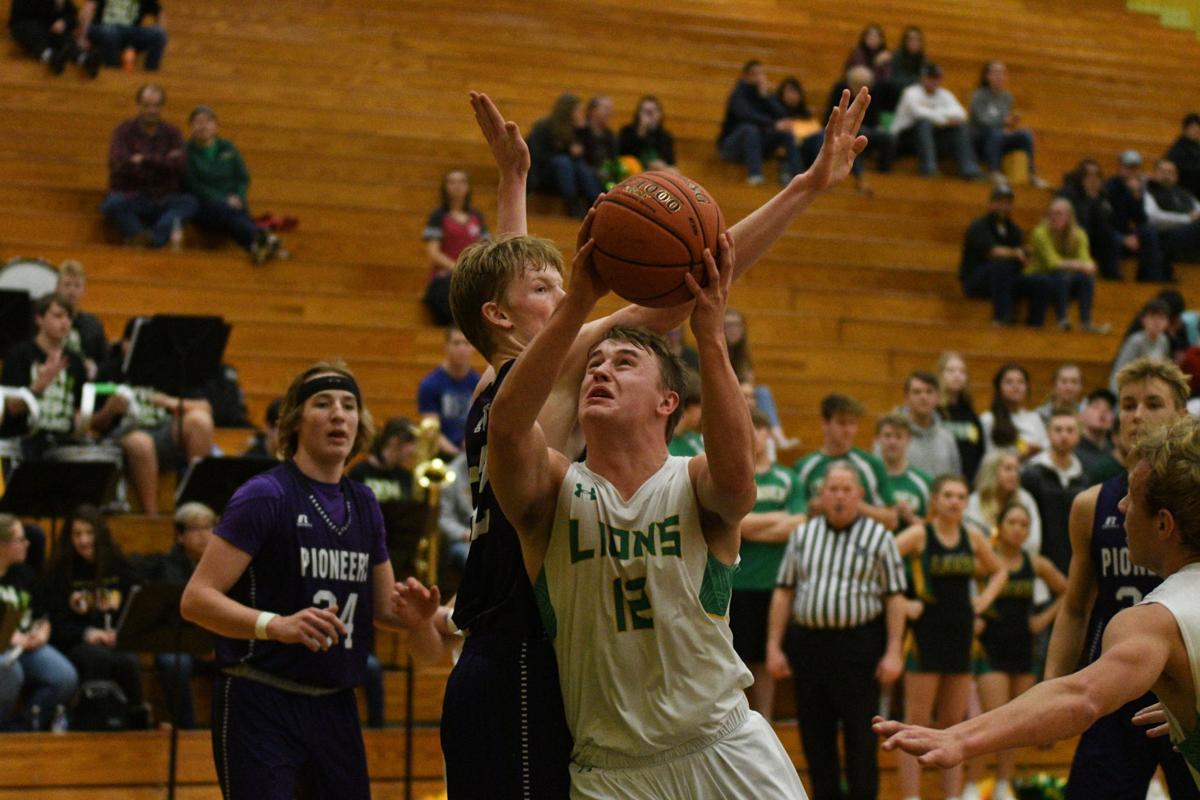 Brock Heppner goes up for a basket in the first half of the Lions' win. Heppner scored a team-high 21 points. (Hailey Palmer/Lynden Tribune) 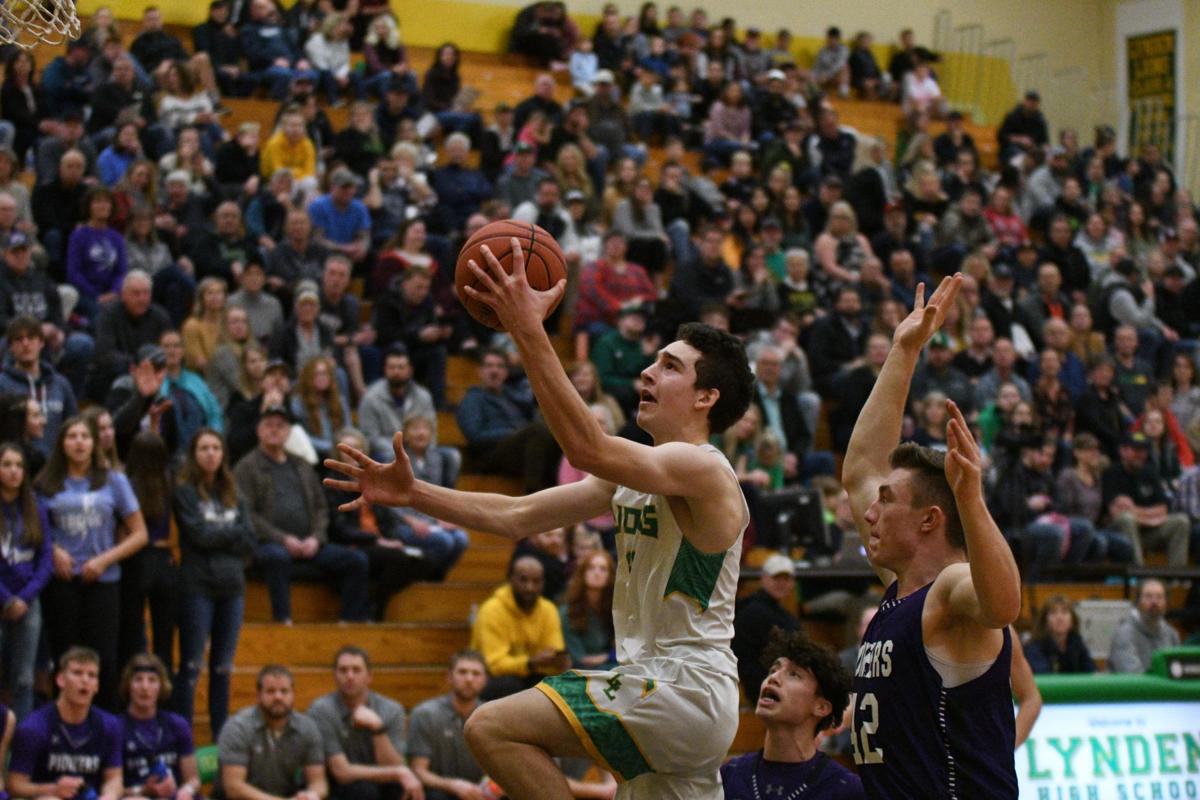 Sophomore Jordan Medcalf rises for a layup in the first half. Medcalf scored nine points for the Lions. (Hailey Palmer/Lynden Tribune) 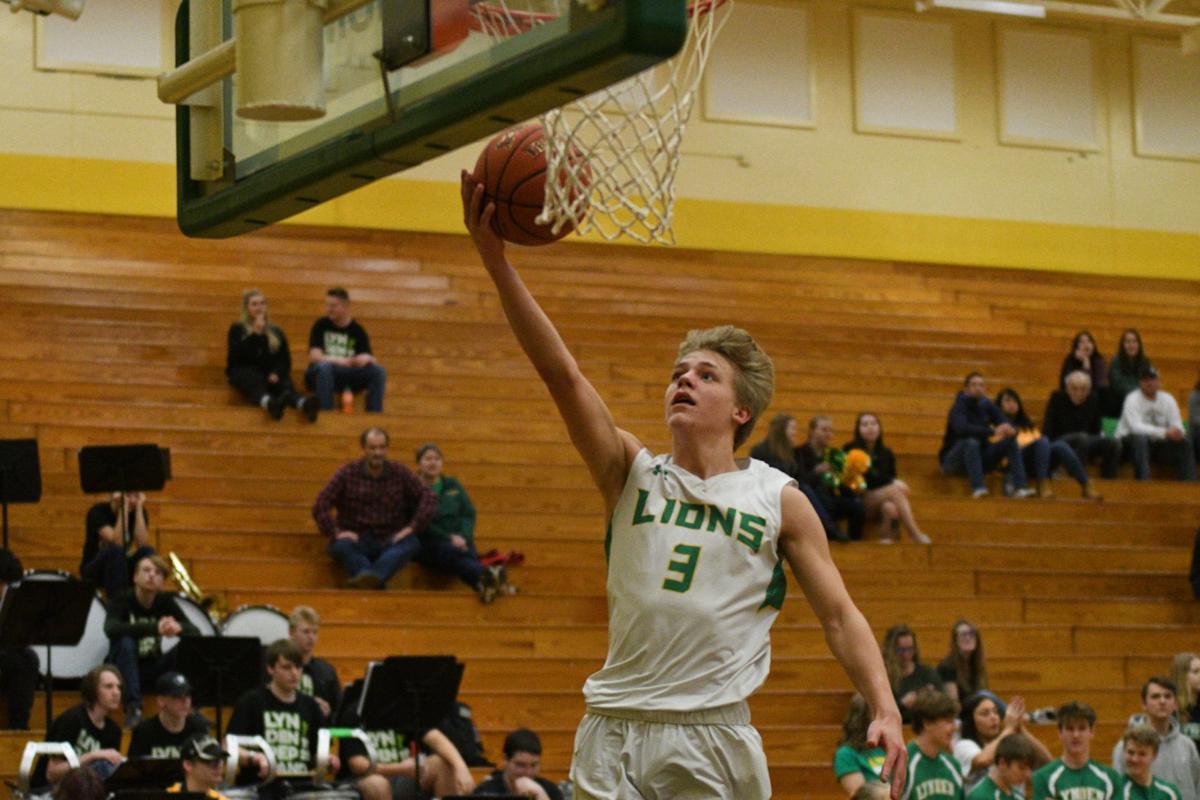 Brock Heppner, Liam Hanenburg and Clay Kochuten all score in double figures for the Lions

LYNDEN — Once the Lynden boys basketball team gets inside near the rim, the Lions are hard to stop. Nooksack Valley got a taste of that Thursday night as Lynden cruised 76-52 to its 12th straight win.

The win keeps the Lions (12-1, 7-0 Northwest Conference) tied for first place in the conference with Burlington-Edison while the Pioneers (9-5, 3-4 NWC) are tied for sixth.

Lynden’s offense was synced up early as the Lions scored 44 points in the first half, but trailed 14-13 late in the first quarter. The defense flipped a switch after that and the Pioneers were held to just 10 more points the rest of the half.

“We weren’t really challenging them defensively,” Lynden coach Brian Roper said. “We were on our heels and they were really comfortable. Koby Whitman kind of sparked us by starting to create some more pressure in the full court. That sped up Nooksack a little bit and I think fatigued them. I thought he was big for us defensively.”

Things were working out just fine on the other side of the ball for the Lions. Senior Brock Heppner and junior Liam Hanenburg repeatedly found the easy baskets inside.

With Hanenburg sitting most of the second half icing an ankle, Heppner continued to make his presence felt in the paint before the starters were pulled.

Roper said he thought the Lions were able to wear down the Pioneers as the game went on because of their size advantage.

“I thought the difference was that we were just a little bigger and stronger,” he said. “That showed as the game went on with Heppner and Hanenburg imposing their will inside.”

It’s been almost two months since the Lions lost a game, but Heppner said the team is just now starting to hit its stride.

“I think we’re starting to come on,” Heppner said. “We’re playing better. We’re a young team and we’re learning how to play together on offense and what our strengths are.”

While the Lions seem to have figured out how to play as a whole, Roper said there are still some things to work on as the team heads down the stretch of the remainder of the season.

“We still want to improve every game,” he said. “We turned the ball over way more than I’m happy with, but our chemistry is good.”

The real test for the Lions will be playing their final seven games over the next two weeks because of snow cancellations last week.

“We have some really tough games coming up and there’s going to be a lot of them in a short amount of time, so we’ll find out a lot about our team in the next couple of weeks,” Roper said.

For Heppner, how to approach all those games squeezed into the last two weeks of the season is simple.

Up next for the Lions is another Northwest Conference battle against Lakewood on Monday, Jan. 27, in Lynden at 7:15 p.m. Nooksack Valley will travel to Sehome on Saturday, Jan. 25, for a 5:15 p.m. match looking to snap a two-game skid.