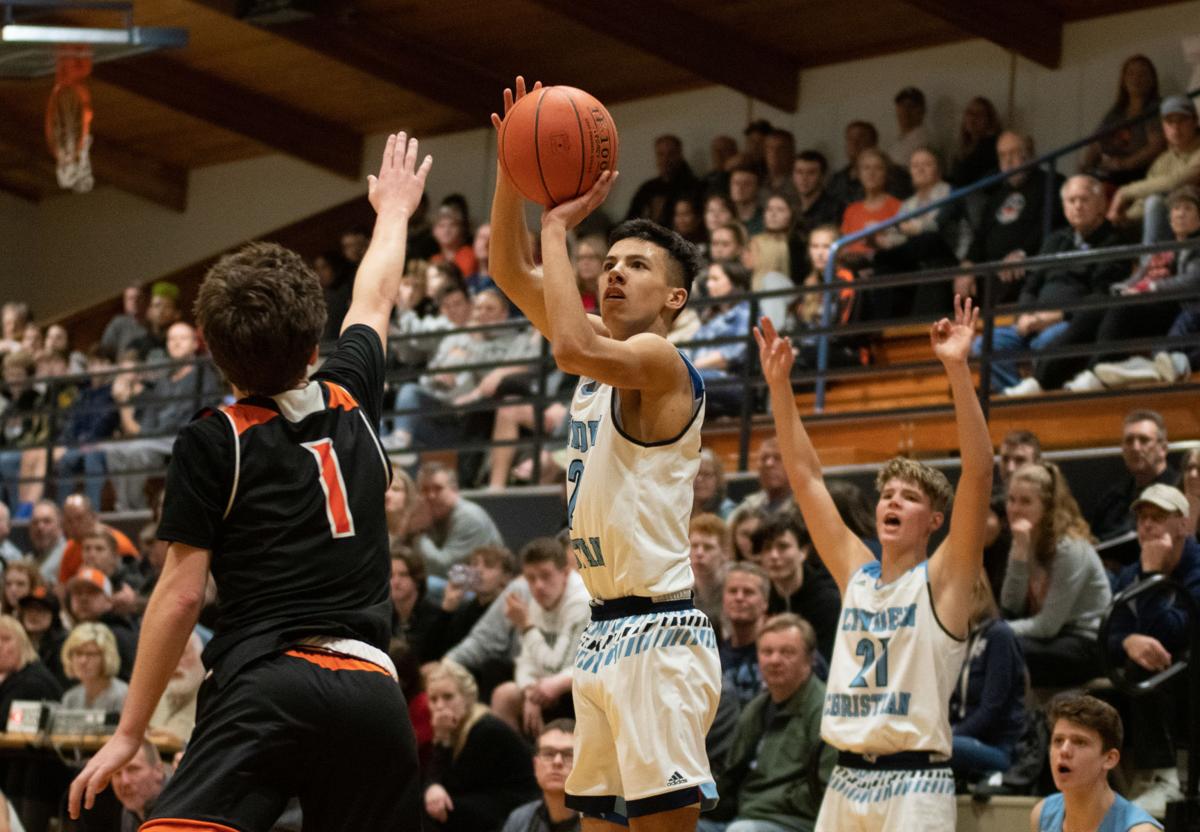 Lynden Christian junior Jaden DeBoer drains a 3-pointer from the wing midway through the third quarter that quelled Blaine's 11-2 run and sparked LC's own 16-2 run. The Lyncs would go on to win 80-55 Friday. (Eric Trent/Lynden Tribune) 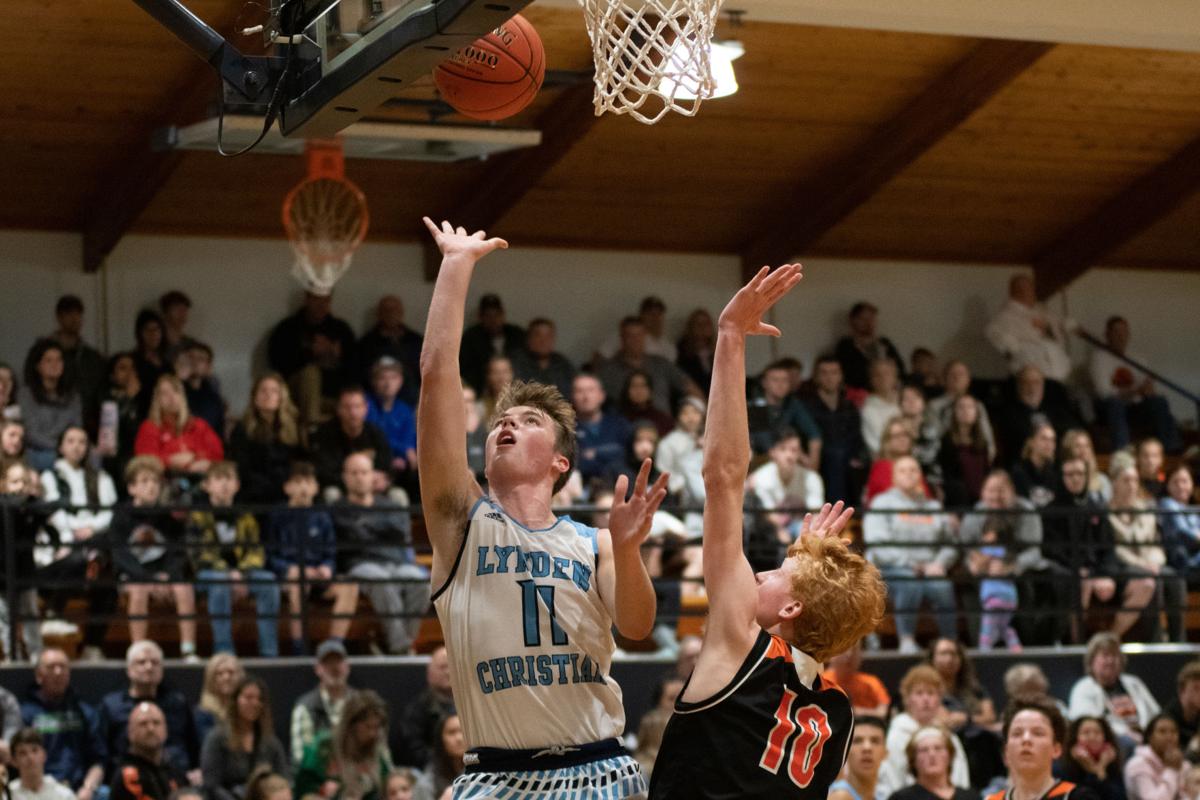 Lynden Christian senior Bryce Bouwman scored a game-high 20 points to help lift the Lyncs to an 80-55 win over Blaine on Friday at home. (Eric Trent/Lynden Tribune) 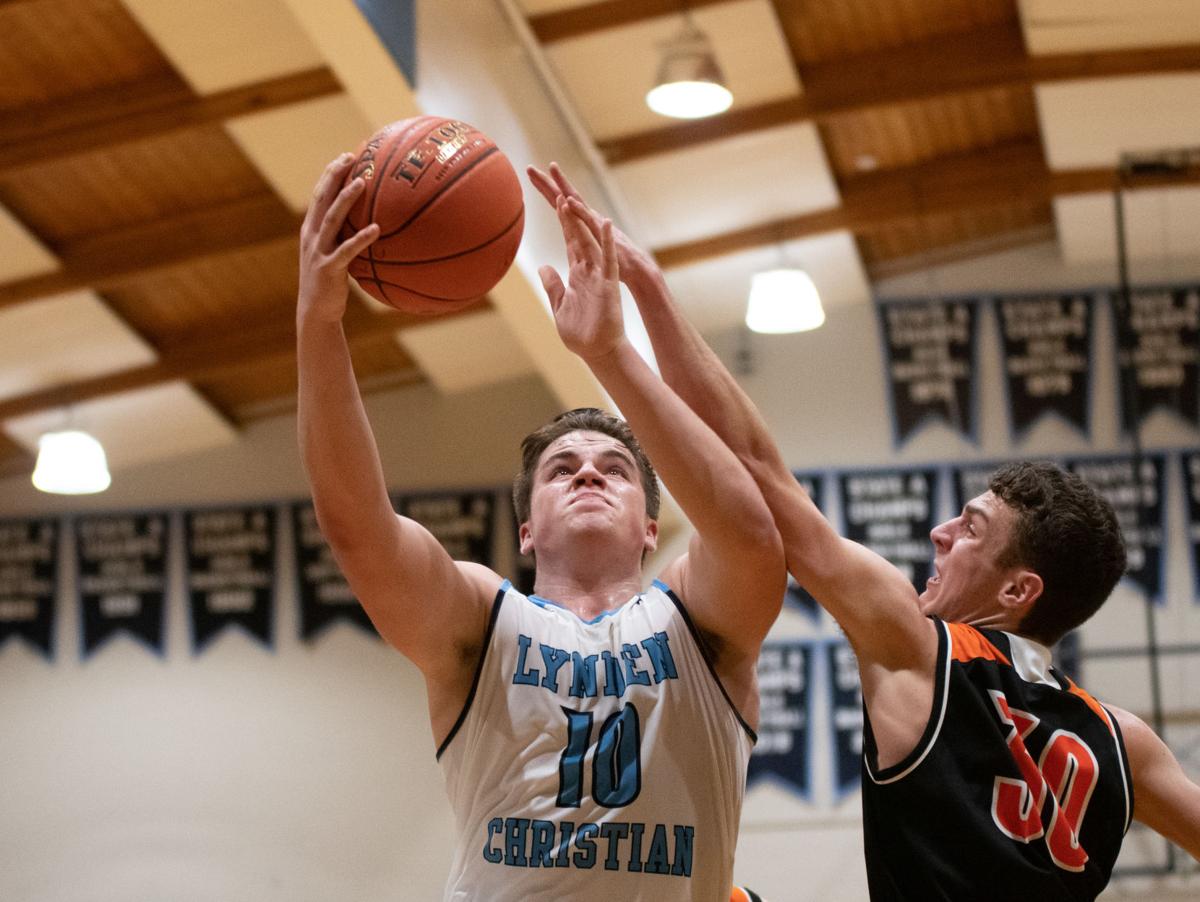 Lynden Christian senior Zach Sipma dominated the post to drop in 16 points for the Lyncs during their 80-55 win over Blaine Friday at home. (Eric Trent/Lynden Tribune) 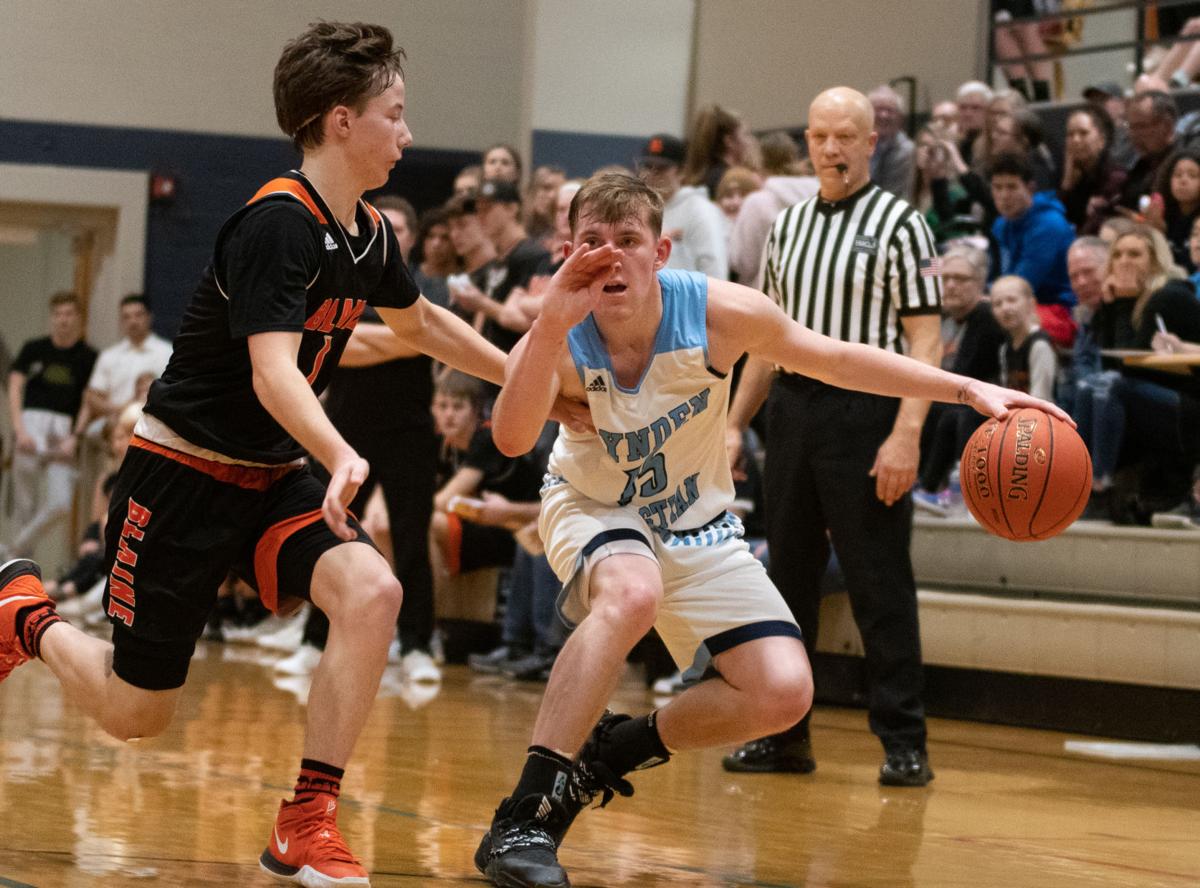 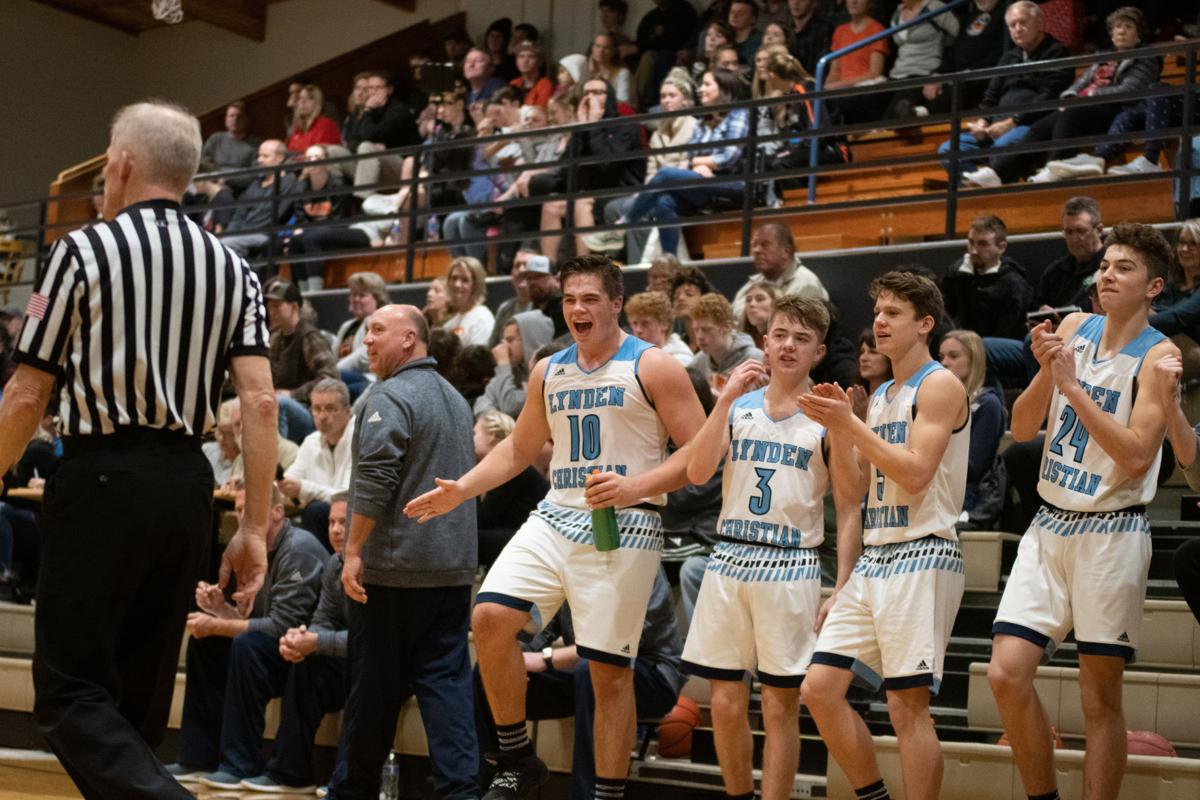 Lynden Christian's bench cheers during the fourth quarter of the Lyncs' 80-55 win over Blaine Friday at home. (Eric Trent/Lynden Tribune) 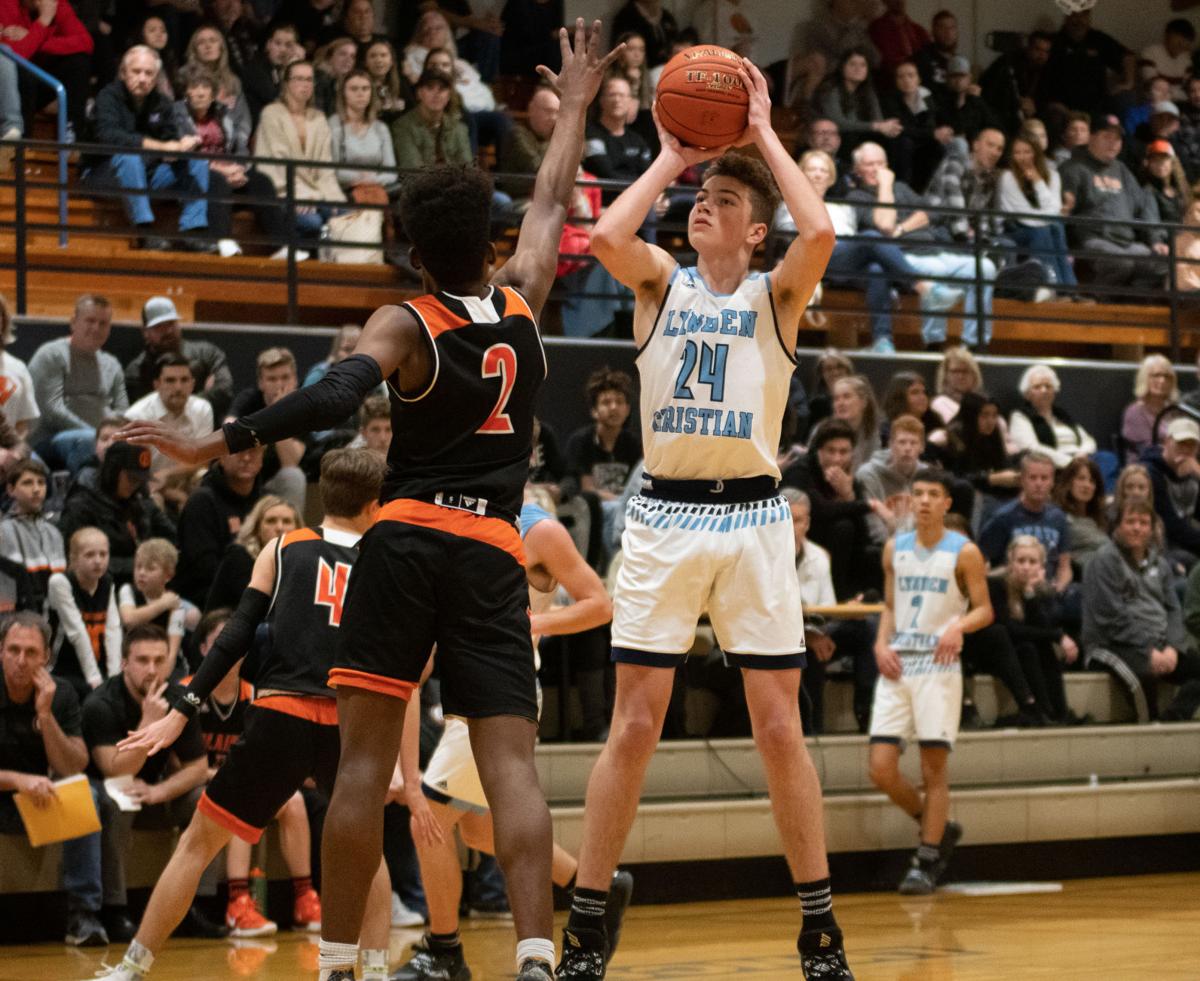 Lynden Christian sophomore Andrew Hommes finished with four points on the night during the Lyncs 80-55 win at home over Blaine. (Eric Trent/Lynden Tribune) 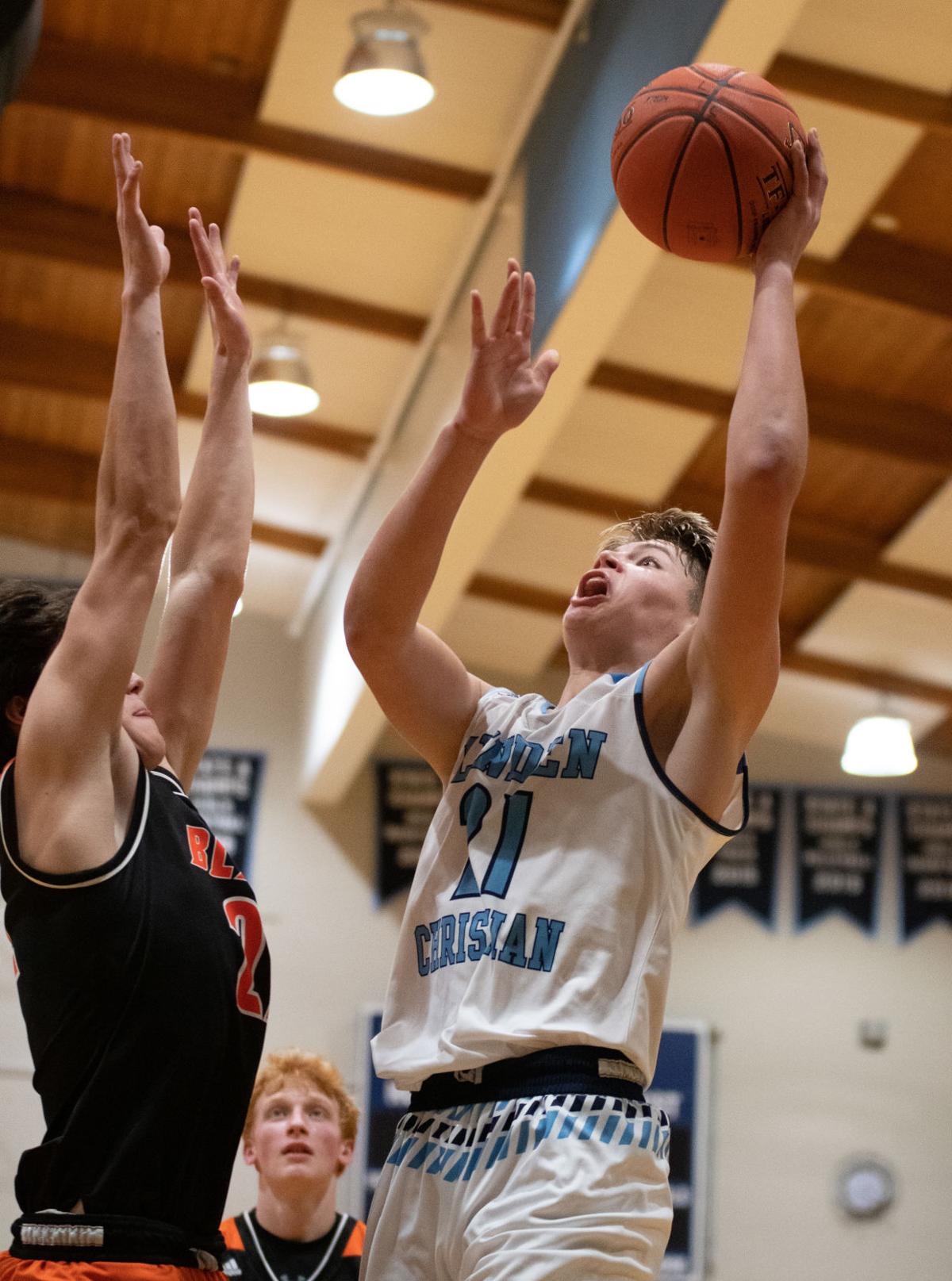 Lynden Christian junior Logan Dykstra scored six points while locking down the paint for the Lyncs during their 80-55 win over Blaine Friday. (Eric Trent/Lynden Tribune)

Lynden Christian junior Jaden DeBoer drains a 3-pointer from the wing midway through the third quarter that quelled Blaine's 11-2 run and sparked LC's own 16-2 run. The Lyncs would go on to win 80-55 Friday. (Eric Trent/Lynden Tribune)

Lynden Christian sophomore Andrew Hommes finished with four points on the night during the Lyncs 80-55 win at home over Blaine. (Eric Trent/Lynden Tribune)

Lynden Christian junior Logan Dykstra scored six points while locking down the paint for the Lyncs during their 80-55 win over Blaine Friday. (Eric Trent/Lynden Tribune)

LYNDEN – Jaden DeBoer fired off a 3-pointer from the wing late in the third quarter, saw it swish and yelled toward his teammates in celebration.

The Lynden Christian junior’s long-range bomb busted Blaine’s 11-2 comeback-bid run and sparked LC’s own 16-2 run that sealed an 80-55 victory over the previously unbeaten Borderites on Friday at home.

The convincing Northwest Conference victory snapped the Borderites’ five-game win streak, the No. 4 Class 2A team in state in the WIAA’s RPI ranking.

“I would be scared to play Blaine in January or February,” said DeVries, LC's career 3-point leader.

It gives the Lyncs their second win in a row after falling to Burlington-Edison 83-74 in overtime, the top-ranked 2A team in the state, during the season opener Dec. 16.

LC (2-1, 1-1 NWC) had entered its season opener having just five practices together as a full team as the Lyncs’ football season ended less than two weeks earlier. Six of the nine varsity players were on that football squad and are still adjusting to basketball.

Blaine (5-1, 1-1 NWC) looked to take advantage of that, pushing the tempo early on and deploying a frenzied full-court press. It slowed the Lyncs a bit in the first quarter, as LC took a six-point lead after one frame, but the fast-paced action ultimately played into the Lyncs’ hands.

“We love to run,” said DeVries, who drained four 3s. “They’re a phenomenal transition team, so we were worried about our transition defense. I’m glad we were able to rise to the challenge.”

A 20-point lead for the Lyncs early in the third quarter was suddenly cut to just nine as the Borderites broke off an 11-2 run midway through the frame.

“We played real passive in the second quarter, then the third quarter we attacked,” Bouwman said. “When we attacked our shooters were open to kick out.”

It’s a formula the Lyncs have struggled with in their first two games: putting the ball on the floor and getting to the basket. Tonight, they wore down the Borderites’ defense with forays to the rim.

“That’s where it starts,” Lyncs coach Roger DeBoer said. “You have to have that confidence to get to the basket, get to the middle of the paint and kick back out. Those types of shots are a lot easier.”

The Lyncs have been rotating all nine guys the past week and every one of them saw action tonight and scored, a crucial aspect of the win DeBoer said.

“We need every one of them,” DeBoer said. “It’s nice to see the contributions that we saw from them in front of a big crowd. Hopefully it excites people to come watch us. This is a fun brand of basketball.”

The win gives the Lyncs some much-needed momentum as they prepare for two tournaments in the next week, first the Highline College Showcase on Saturday, followed by the Cloud 9 Christmas Classic Dec. 27-28.

Other boys scores from around the county:

Junior Cody Coppinger poured in a game-high 25 points and the Pioneers (5-1, 1-1 NWC) rebounded from a 76-51 loss to Class 3A Ferndale on Tuesday to take care of the Mounties Friday night.

Coppinger was one of four Pioneers to register double-digit scoring, including 14 from Cole Eldridge and 13 each from Clancy Coppinger and Zach Johnson.

Nooskack Valley looks to make it two wins in a row when they travel to Coupeville in a nonleague matchup at 2:45 p.m. Saturday.

The Mounties (1-5, 0-2 NWC) lost their fourth straight and will look to gain traction at the Blaine Holiday Tournament Dec. 27-28, where they face University Prep and Lynnwood.

Junior Micah Daheim scored a team high 14 points and the Mariners (3-4, 2-0 NWC) have now won two of their last three.

Sehome next faces Montesano and Sequim at the Cloud 9 Christmas Classic at Lynden Christian HS and Lynden HS on Dec. 27-28.

Only five Red Raiders picked up points, including six from Trevor Johnson, four from Aidan Bartlett, two from Chris Oesterling and one from Thomas Mathews.

Bellingham travels to Oak Harbor next for a 7:15 p.m. nonleague match on Saturday.