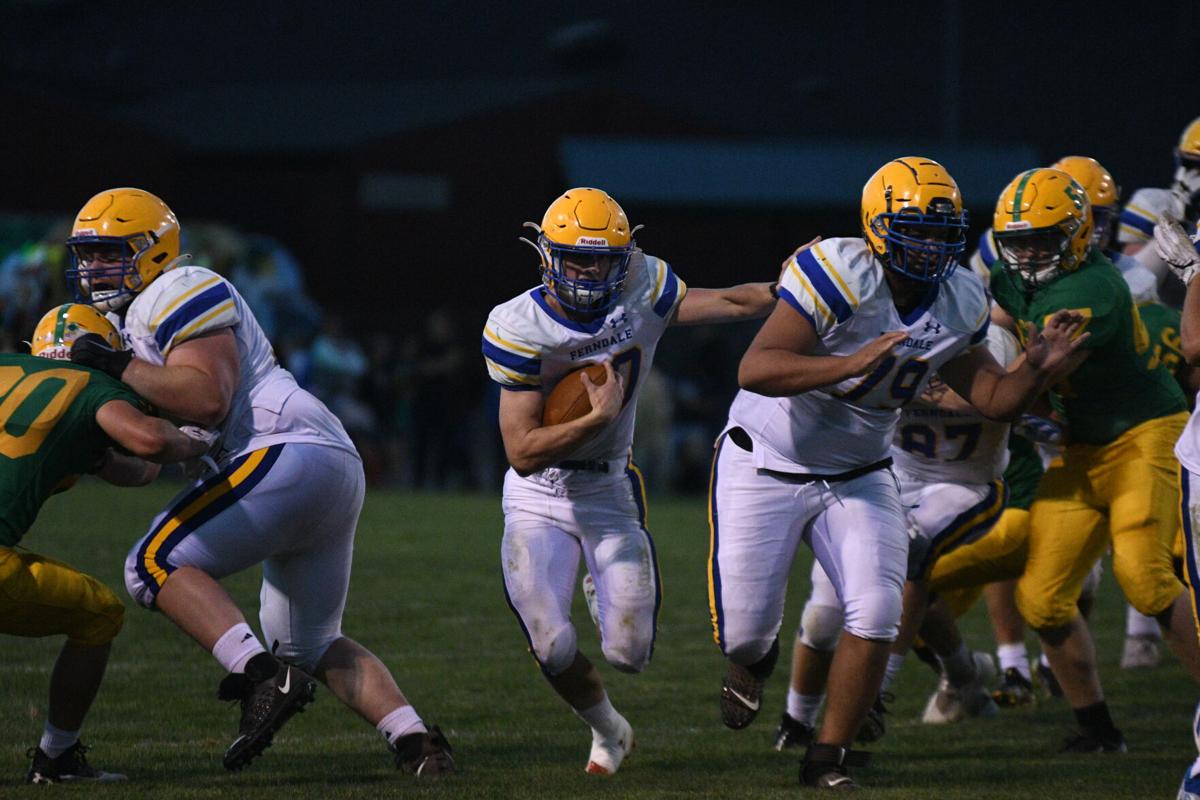 Ferndale's Thomas Broselle scored a touchdown and brought down an interception against Lynden. (Hailey Palmer/Lynden Tribune) 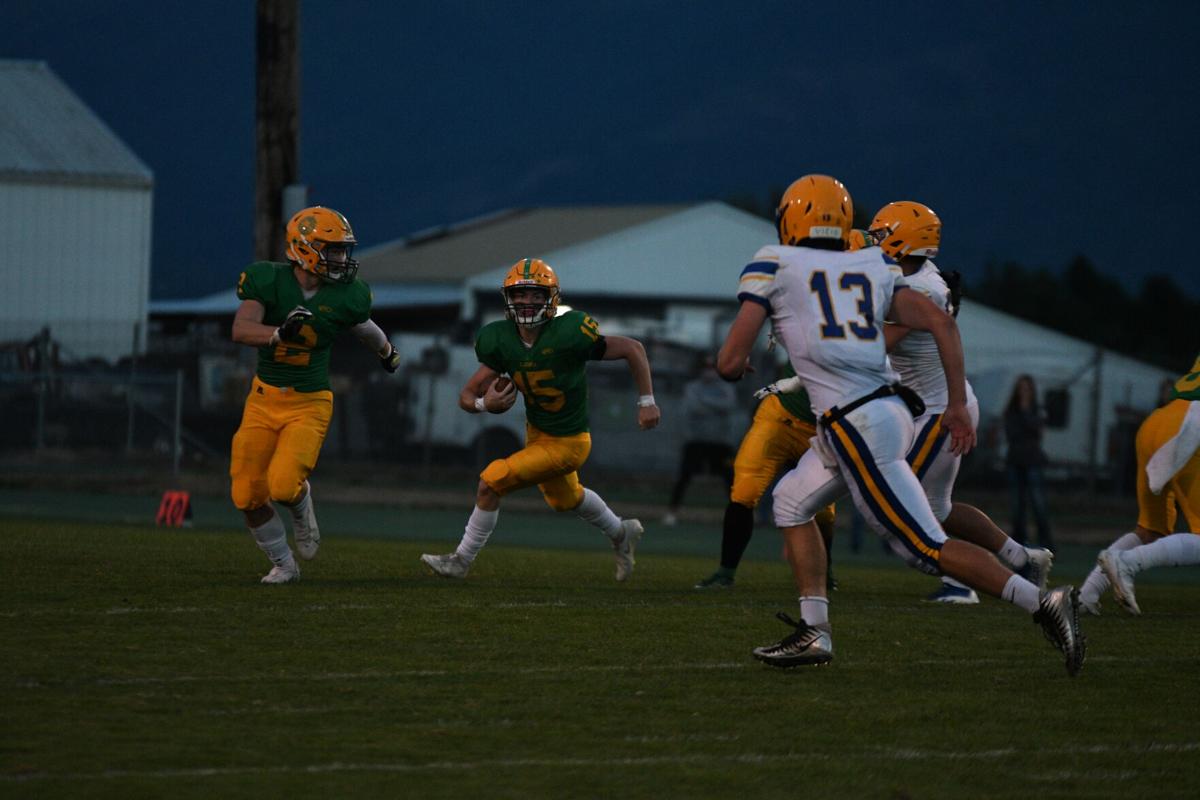 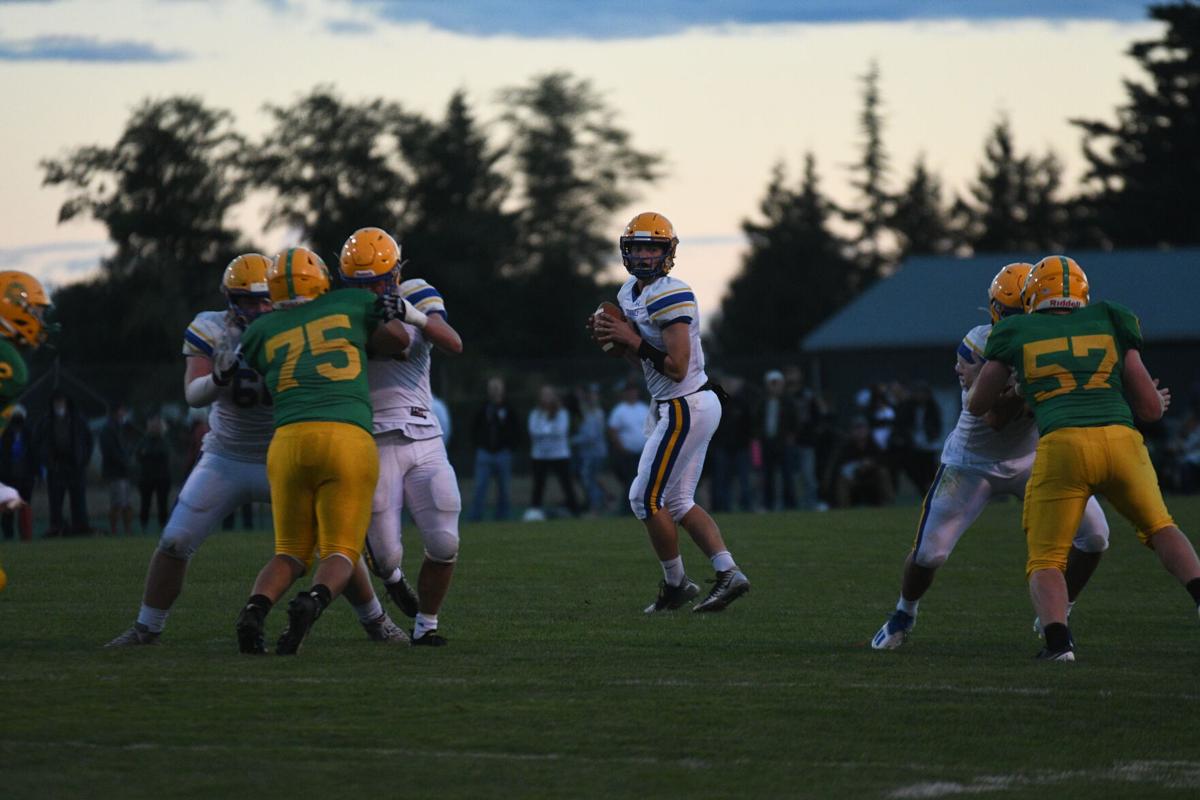 LYNDEN — Ferndale’s 35-25 win over Lynden Friday night played out like a back-and-forth battle, but it never felt like the Golden Eagles weren’t in control.

Especially when it came to the offensive line.

As they did in week one, the boys up front for the Ferndale offense paved the way for its running backs all night.

“Our running backs aren’t anything without that o-line,” Ferndale running back Isaiah Carlson said. “They showed up today.”

The Golden Eagles got on the board first when quarterback Mark Schlichting connected with Ryan Pelton for an 8-yard catch and run for a touchdown.

Schlichting threw his second touchdown of the game right before halftime, finding Thomas Broselle for an 11-yard strike.

“I think we continue to be pretty crisp on offense,” Ferndale coach Jamie Plenkovich said. “When we did throw the ball, Mark did a great job of making reads and making plays in the passing game.”

Those two passing touchdowns in the first half opened the floodgates for the running game to take off in the second half.

Schlichting added to the Golden Eagles’ lead on a 1-yard touchdown run in the third quarter. The score was set up by a Broselle interception on the opening drive of the second half.

The Lions wouldn’t go away quietly, however.

Following the Schlichting touchdown run, Lynden junior Troy Petz ran the kickoff more than 90 yards back the other way for a score. The Lions missed the extra point again and trailed 21-12 in the third quarter.

Carlson rattled off a 28-yard run for a score at the beginning of the third quarter to push the Golden Eagles’ lead to 28-12.

“Our line did a great job of controlling the line of scrimmage. For the most part, we were getting three or four yards a play, at least,” Plenkovich said. “We weren’t getting behind the chains and getting ourselves in long-yardage situations.”

Lynden had plans to still stick around, as Lane Heeringa scored on a run from 25 yards out the following drive.

As it had happened all game though, for every answer the Lions had, the Golden Eagles had one of their own shortly after.

Ferndale found paydirt on a 47-yard run from Carlson to make it 35-18 late in the fourth quarter.

The Lions made it interesting toward the end with a 2-yard touchdown rush from Hermanutz and onside kick recovery, but a turnover on downs sealed the deal for Ferndale to earn its second win of the season.

“Sometimes, a loss gets you refocused,” Lynden coach Blake VanDalen said. “We’re going to come with a great attitude on Monday because we have no time to pout.”

Ferndale’s next game is also at 7 p.m. next Friday against Arlington at Blaine High School.

Scores from around the county: