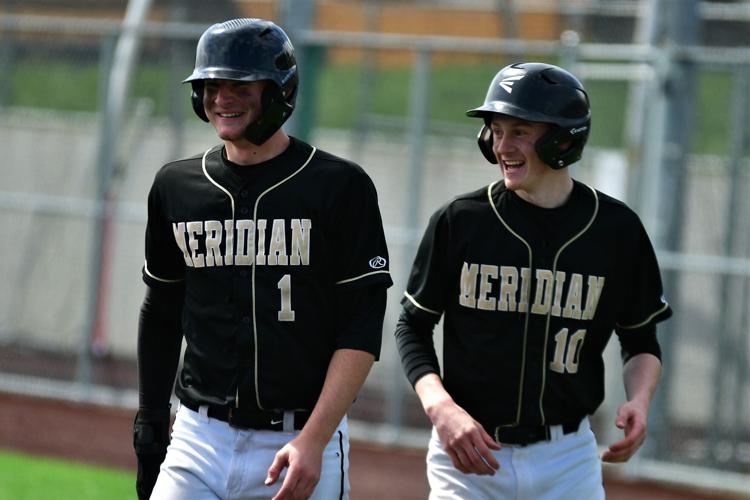 Meridian's Bryce Johnson (left) and Hunter Jones celebrate consecutive runs in the Trojans' 7-0 win over King's in the first consolation round of the 1A District 1/2 tournament on Saturday, May 7, at Sehome High School. (Connor J. Benintendi/Lynden Tribune) 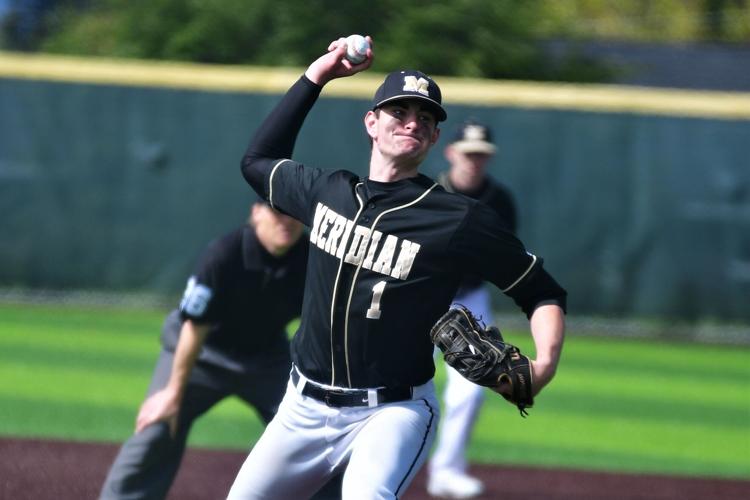 Meridian's Bryce Johnson steps into a pitch in the Trojans' 4-2 loss to Overlake on Saturday, May 7, in the opening round of the 1A District 1/2 tournament at Sehome High School. (Connor J. Benintendi/Lynden Tribune) 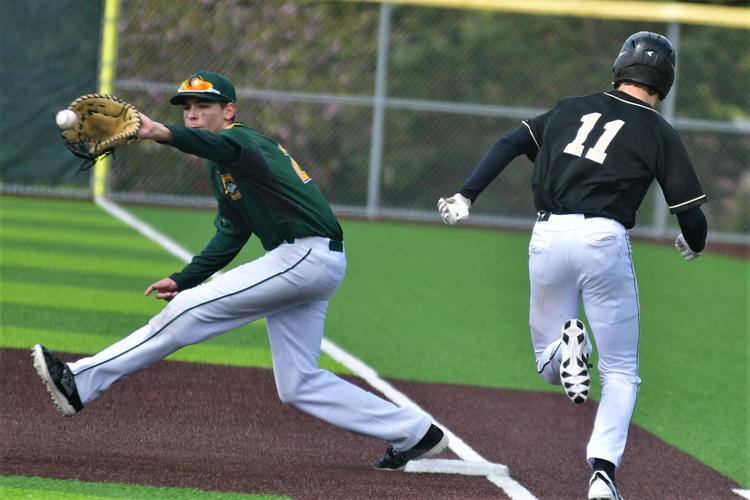 Meridian's Daniel Short rushes to beat the throw to first base in the Trojans' 4-2 loss to Overlake on Saturday, May 7, in the opening round of the 1A District 1/2 tournament at Sehome High School. (Connor J. Benintendi/Lynden Tribune) 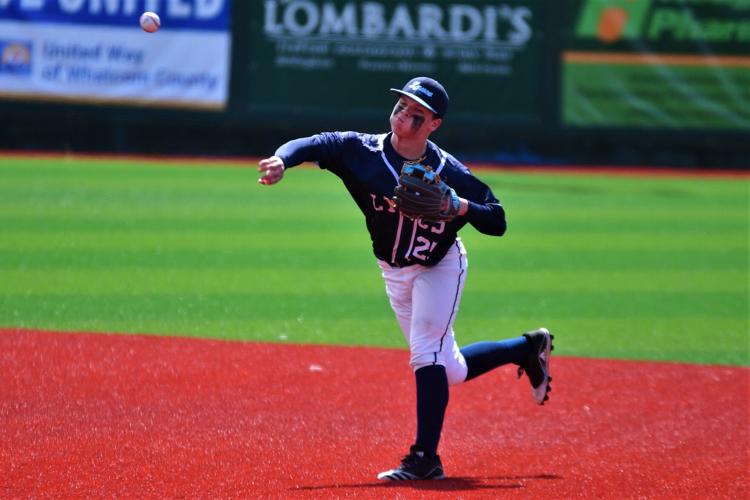 Lynden Christian's Austin Engels makes a throw to first base in the Lyncs' 3-0 loss to South Whidbey on Saturday, May 7, in the opening round of the 1A District 1/2 tournament at Joe Martin Field. (Connor J. Benintendi/Lynden Tribune) 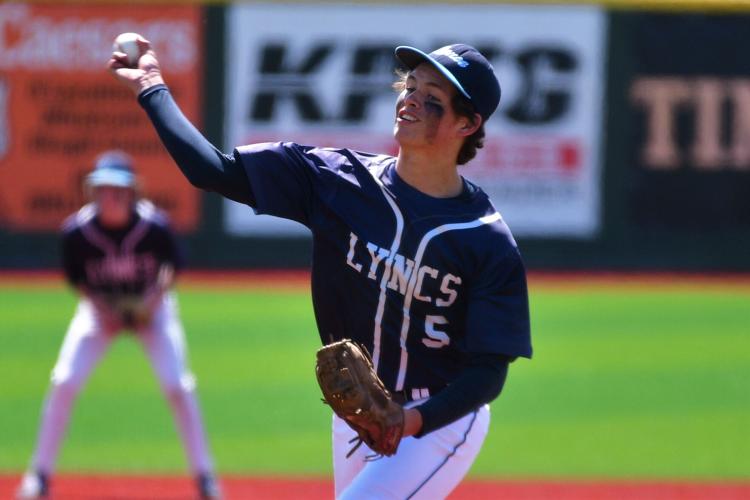 Lynden Christian's Lane Dykstra lets a pitch loose in the Lyncs' 3-0 loss to South Whidbey on Saturday, May 7, in the opening round of the 1A District 1/2 tournament at Joe Martin Field. (Connor J. Benintendi/Lynden Tribune) 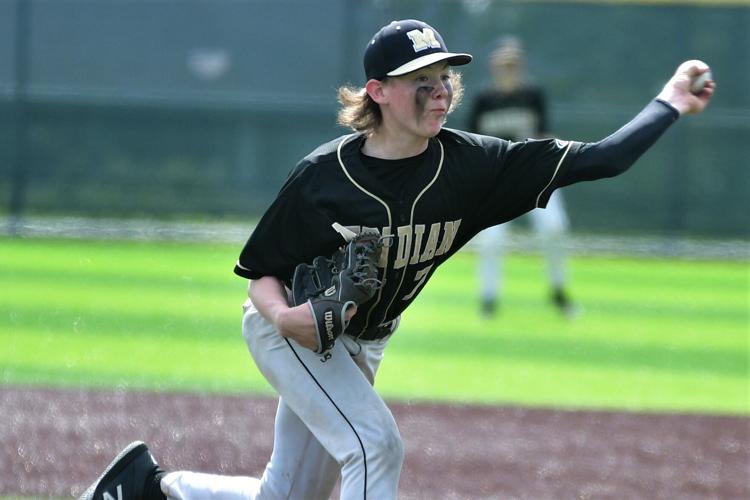 Meridian's Jonah Aase steps into a pitch in the Trojans' 7-0 win over King's in the first consolation round of the 1A District 1/2 tournament on Saturday, May 7, at Sehome High School. (Connor J. Benintendi/Lynden Tribune) 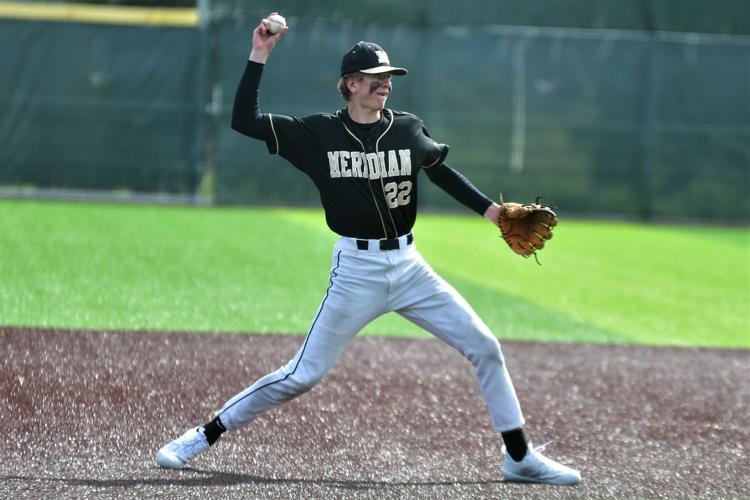 Meridian's Jaeger Fyfe throws to second base in the Trojans' 7-0 win over King's in the first consolation round of the 1A District 1/2 tournament on Saturday, May 7, at Sehome High School. (Connor J. Benintendi/Lynden Tribune) 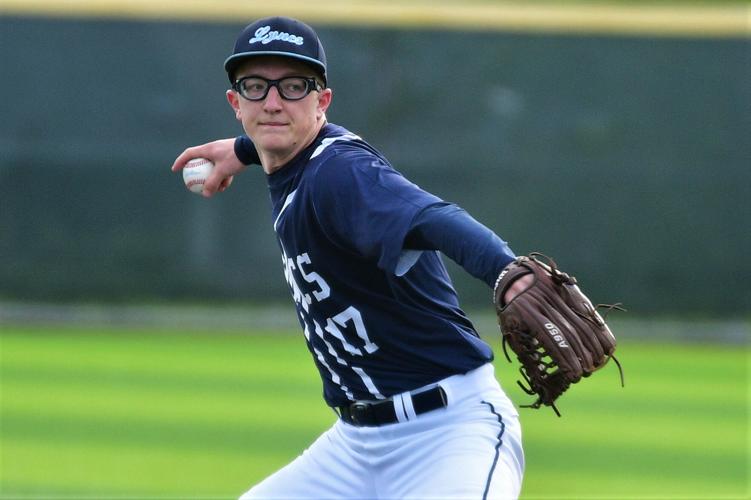 Lynden Christian's Isaac Paxton winds up for a pitch in the Lyncs' 13-3 loss to Blaine in the first consolation round of the 1A District 1/2 tournament on Saturday, May 7, at Sehome High School. (Connor J. Benintendi/Lynden Tribune) 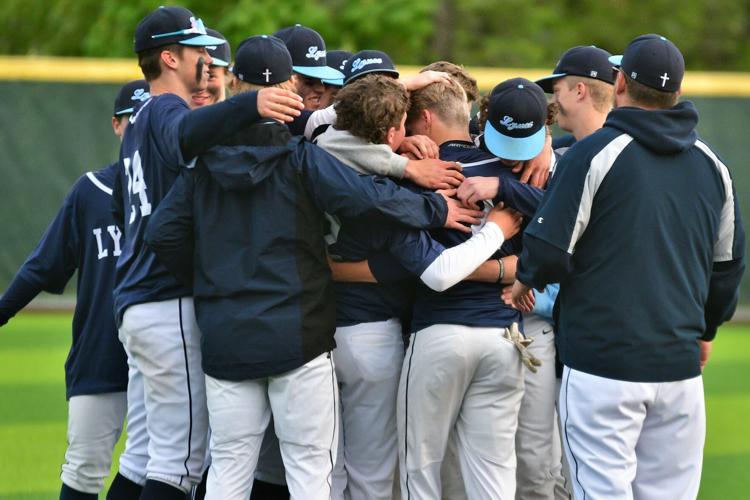 Lynden Christian's lone senior Joseph VanHofwegen is embraced by his team following the Lyncs' 13-3 loss to Blaine in the first consolation round of the 1A District 1/2 tournament on Saturday, May 7, at Sehome High School. (Connor J. Benintendi/Lynden Tribune)

BELLINGHAM – The opening double-headers of the 1A District 1/2 baseball tournament have come and gone for the first time since 2019.

One of two area teams in the mix survived, while another had their season come to an end. Meridian went 1-1 on the day and now needs one more win to secure a regionals berth. Lynden Christian struggled in both games, seeing their season cut short after two straight losses.

The Trojans, the No. 3 seed entering the tournament, will play No. 8 South Whidbey on Saturday, May 14, at Joe Martin Field with the winner advancing to the third/fourth place district game. The first pitch is at 1 p.m.

Here’s a recap of Saturday’s 1A district baseball action.

The Trojans started the way they wanted to, picking up an early lead.

Meridian beamed four hits in the bottom of the third inning alone. Before then, neither team was able to connect on much of anything.

They, however, were only able to convert one score off the streak, with junior Tyrel Brooks getting the day started for the Trojans. Overlake tied the game up in the top of the fourth on an RBI double and secured the lead soon after on an RBI single.

Both teams grew quiet offensively. Meridian freshman Jonah Aase and senior Bryce Johnson picked up hits in the meantime, but the Trojans were unable to round the bases. Johnson also held it down on the mound, striking out six Overlake batters in the game.

“They had some good 3-4 hitters, and 5 hitters, they were all barreling balls pretty well,” Johnson said. “I mixed in a lot more curveballs, starting them off more.”

A potent sixth inning saw Johnson and freshman Jaeger Fyfe each record hits, with an Overlake error allowing Johnson to get home. The Trojans were back in it.

With two down, however, the next Meridian batter was struck out, and it was time for the final frame.

Overlake extended their lead back to two in the top of the seventh. Meridian had one final shot to get back in it. Aase doubled, and the following Trojan batter struck out.

Senior Daniel Short stepped up to the plate, drilling one to deep centerfield that nearly had enough heat behind it to sail over the outfielder’s head. The Overlake defender made the play, and it was over.

As the tournament’s top seed, the Lyncs had a target on their back.

Lynden Christian was never able to get going in their opening district contest against South Whidbey. With junior Lane Dykstra on the mound, the defense wasn’t the issue for LC.

The Lyncs’ offense couldn’t find their rhythm. They had just 3 hits in the game, all singles and they never got a runner beyond second base.

South Whidbey took a 2-0 lead in the top of the second. Strong pitching from the No. 8 seed kept LC’s batters in the dugout most of the game.

“Their guy did a great job, he pitched the umpire’s zone,” said Lyncs’ head coach Noah Rawls. “He threw a good slider outside, we didn’t adjust to it, so props to that guy.”

Dykstra managed to strike out five South Whidbey batters, but he could only keep them at bay so long. Two of LC’s hits were in the bottom of the sixth as they already trailed 3-0.

It was a disappointing result for the Lyncs, but Rawls remained optimistic postgame. LC was ready to play for their season with clear heads.

Following their loss to Overlake, Johnson made it clear that the Trojans planned to come out with confidence on the plate against King’s.

As a result, Meridian took a quick 4-0 lead in the top of the first inning.

Aase and sophomore Ian Forbes walked on the first two at-bats, and Johnson picked up a single two batters later. Junior Hunter Jones connected on an RBI single that score the initial two.

A King’s error allowed Johnson and Jones to get home two batters later, and the Trojans’ dream start was underway.

Their efficiency continued into the second, picking up two more runs to extend the lead to 6-0. Aase was on the mound for Meridian, striking out six batters en route to picking up the win.

Meridian head coach Steve Slesk said the Trojans’ pitchers create the largest mismatch for other teams since they’re both so talented.

“The second half of the season our freshman, Jonah [Aase] has given us a better chance to win,” Slesk said. “He’s a pure pitcher, and Bryce [Johnson] has got a really good arm. He’s a great athlete.”

King’s couldn’t connect on anything, allowing Meridian to extend their lead to seven in the top of the fifth. The Trojans didn’t have to work too hard from there to cruise into a win and an extra week of baseball.

By the top of the fourth inning, it wasn’t looking good for the Lyncs.

LC trailed Blaine 8-0, looking for a spark of any sort to try and save their season. Similar to their first game of the day, they just couldn’t seem to get into a rhythm offensively.

Some minor errors in the field made it difficult to keep a streaking Borderites squad off the bases. The Lyncs accrued just two hits through the first four innings.

Blaine extended their lead to 12-0 in the top of the fifth, as they tried to put the game away. LC responded, racking up hits from three of four batters in the bottom of the inning and scoring sophomore Treven Blair on an RBI single from Dykstra.

LC ended on that high note, as Blaine re-extended the lead to 10 in the top of the sixth. After a scoreless bottom of the inning, the Lyncs’ season was over.

It was Rawls’ first-ever season as a head coach after taking over for Dan VanderKooi, and he had nothing but positive things to say about his team postgame.

“I’m just proud of these guys,” Rawls said. “They were awesome, it was a great group to be a part of. They’re competitors, you can see right now these guys are torn up that it’s over.”

VanHofwegen, the team’s lone senior, was emotional after the game. He said pitching the first innings of his career during this season may be the most memorable moment for him.

“My favorite moments were pitching and just playing with all my friends, making new friends,” he said. “I didn’t get to play with my friends in my grade [this year] because I’ve got none so I made these boys my friends, and now they’re my family.”

As the sophomore-heavy team rolls into the offseason, Rawls is excited for the future of Lyncs baseball.

“I’m excited for where we’re going with this program and the direction that we’re going,” Rawls said. “I think there’s a lot of good things to come.”