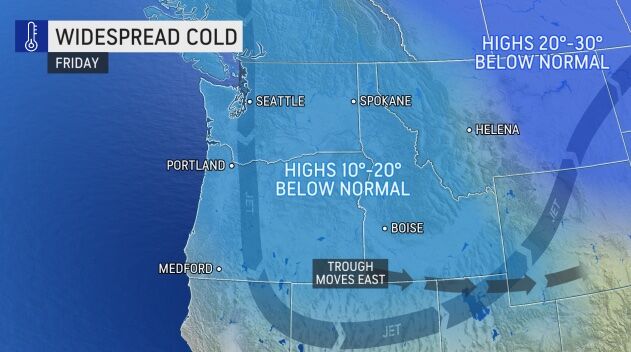 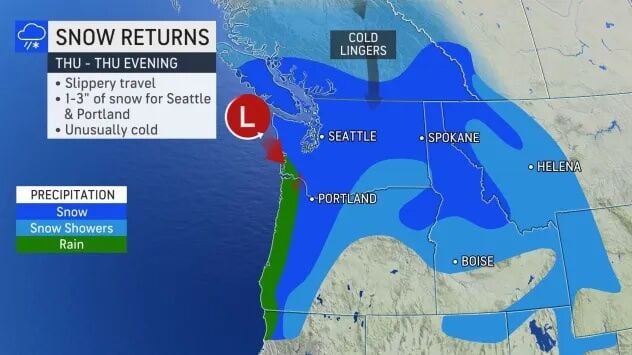 As Old Man Winter continues lobbing heavy snowballs at Seattle, Washington, and Portland, Oregon, a frigid blast of cold air is set to rush into the Pacific Northwest this week, making for the region's coldest New Year's Eve in years, AccuWeather experts say.

Seattle is only a few days removed from experiencing its lowest temperature since 2010, when a low of 17 degrees Fahrenheit was recorded on Dec. 26 as snow fell across the city and the Interstate 5 corridor.

That cold and snowy pattern is expected to continue well into the start of 2022 in the Northwest, forecasters say.

Motorists and pedestrians can expect more rounds of slippery travel conditions through this weekend.

Vast stretches of interstates 5, 84 and 90 will fall within the targeted range of the wintry onslaught.

Meteorologists say drivers venturing over these roads should prepare to encounter areas of snow and ice during the storms.

Chains may be required when venturing over the passes in the Cascades.

Even with two days left in December, locations in Seattle and Portland had already topped their average snowfall totals for the month.

As of Dec. 29, Seattle has accumulated 5.8 inches of snow, 3.4 times its normal December amount, while Portland has totaled 3.6 inches, 2.9 times its December average.

"Much of the lower elevations in the I-5 corridor from Washington to Oregon can expect 1-3 inches of snow with locally higher amounts through Thursday evening," AccuWeather Senior Meteorologist John Feerick said.

Snowfall will tend to be higher over hilly areas and at intermediate elevations in the Cascades and Olympics.

Over the passes in the Cascades, 3-6 inches of snow is in store while the high country will likely tack on another 1-2 feet of snow on top of their deep snowpack.

In parts of the high country of the Cascades, there is upwards of 8 feet of snow already on the ground with local amounts likely pushing 15 feet.

Along the immediate coasts of Washington and Oregon, a mixture of rain and snow is forecast with local amounts of a coating to an inch possible with this latest storm.

The stormy pattern is expected to take a breather toward the end of the week, with the next storm likely to hold off for New Year's Eve celebrations.

Conditions are likely to be dry but very cold, so people who plan on spending time outdoors in the Northwest should bundle up.

"This New Year's Eve is likely to be the coldest in years for the region," AccuWeather Chief On-Air Meteorologist Bernie Rayno said.

Temperatures will dip into the single digits and teens F over areas east of the Cascades in Washington and Oregon by midnight Friday night.

However, it will be cold over coastal areas of both states with midnight temperatures ranging from the lower to mid-20s in northwestern Washington to the upper 20s and lower 30s in southwestern Oregon.

At this time, a daytime high near 30 is forecast for Seattle, while Portland will likely record temperatures in the upper 30s.

It may not be until Sunday and Monday that the next storm rolls through and returns the chance for snow once again in some of the lower elevations west of the Cascades.

AccuWeather's long-range team of meteorologists expects the general pattern of below-average temperatures and above-average precipitation to continue into mid-January across the West.

The pattern will continue to hammer away at the long-term drought over much of the West.

However, the risk of flooding and mudslides will also exist where rain falls at intermediate elevations during brief intrusions of warm air.

With more snow to come through the end of 2021, this month is likely to finish among the top snowiest Decembers on record in both cities.

For Seattle to move into the top 10 snowiest list, it must reach 6.4 inches, a total which was last set in December 1964.

Portland has already moved into the top 10, with 3.6 inches of snow so far this month, making it the 8th snowiest December on record.

Both Seattle and Portland have a long way to go to record their snowiest winters on record.

At Seattle-Tacoma International Airport, the title belongs to the 1968-69 winter season with 67.5 inches of snow.

At Portland International Airport, the snowiest winter on record was in 1949-50 with 44.5 inches.

Seattle receives an average of 6.2 inches of snow each year, while Portland picks up 4.3 inches.

Both locations are likely to reach close to their seasonal averages by the end of December.