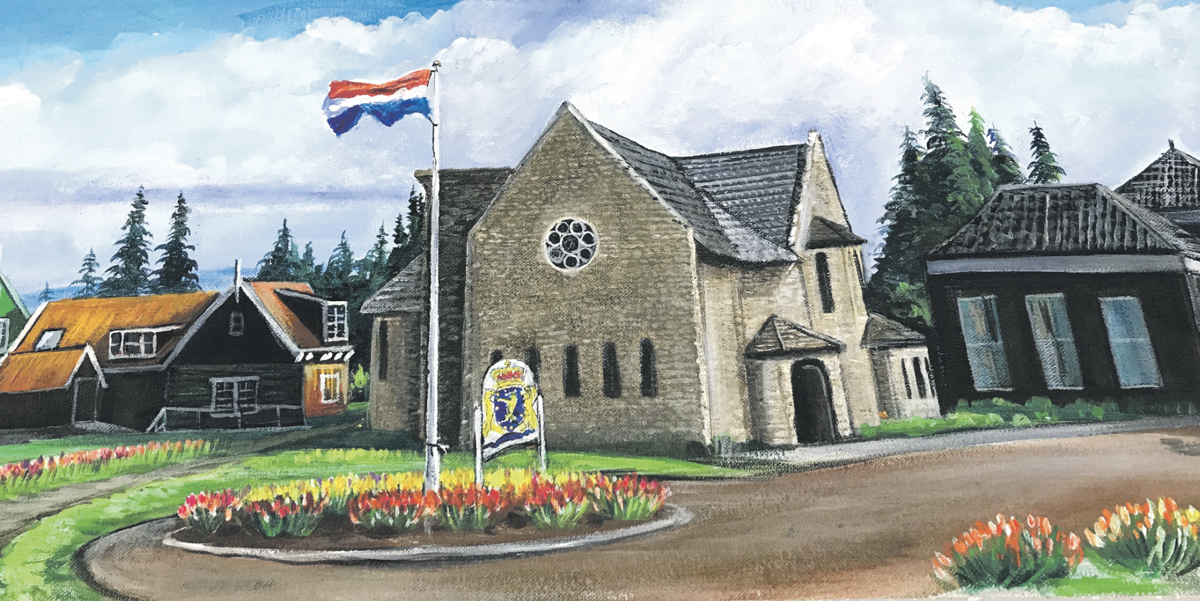 The art style of a new mural at the Seventh Street entrance to downtown Lynden is shown above, a segment close-up, while  building co-owner Tim Keiper below holds a canvas miniature. The change-over begins Monday, May 3. (Calvin Bratt/Lynden Tribune) 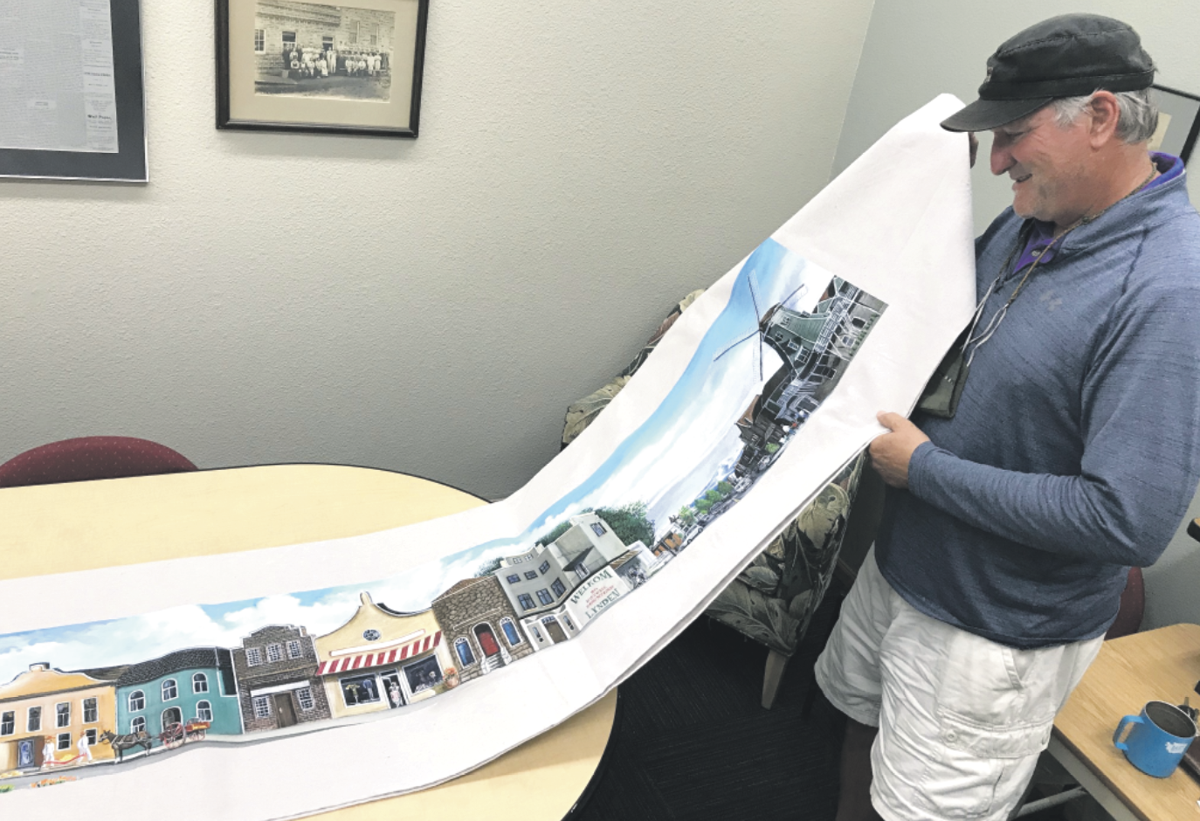 LYNDEN ­— Best get a look at what remains of the 19-year-old Seventh Street parking lot mural. It’s going to be replaced.

Next week Monday, the 130-foot-long whimsical rendition of Dutch folk life painted by Bill Swinburnson in 2002 gives way to a new mural to be done by father and son team Harry and Eric Engstrom of Arlington.

About half of the Swin mural was already taken out — due to mildew in the cinder block walls it was on — as Terrace Apartments was built to three stories by Ron Hanson over the past year. Block pieces of the old mural were made available to community members to keep as mementos.

Now it’s down to final touches on this building for partners Hanson and Tim Keiper, and creating a new mural is part of that.

The pair say they have met with original artist Swinburnson, now in his 90s, and the Lynden Lions Club, which contributed $8,000 as project sponsors at the time, to keep them apprised of what is happening with the building and to seek their blessing for the mural change.

“He appreciated that we’re going to include a streetscape and his whimsical characters into the new one,” Keiper said of the first artist.

Swinburnson does not want to be painting new mural in the old style, and it just does not work to blend the old style in with a new. Keiper and Hanson say they believe Lyndenites will really appreciate the new look.

The first floor of the new building needs to have a few windows and doors on its west side to let in light, and the new mural will work with that factor, the two building owners said.

The Engstroms, as Northern Light Murals, have done many public murals, especially in their home Snohomish County area, in a style that is called “realistic art,” versus Swinburnson’s “folk art,” Keiper  said.

The Engstroms have developed a canvas scale model of what the new mural will be, and Keiper and Hanson unfurled that last week for the Tribune to take photos of.

The progression of the mural images will be from “Old Holland” to modern Holland to Lynden with its Dutch characteristics to “other aspects of modern Lynden,” including more of its diversity today, the pair said. In fact, at the far right end of the new mural, a little liberty will be taken to show Mount Baker in the distance and the Dutch Village windmill on the nearby street corner.

The Engstroms will begin their work on May 3.

A sign at the new mural will explain it and its style and will have a small picture of the old one and pay tribute to Swinburnson, Keiper and Hanson said.

Christine Keiper reported this week Tuesday that she and husband Tim, as well as Ron and Alida Hanson, will be working with the Whatcom Community Foundation as the financial agency to take any community donations toward the $25,000 cost of the new mural. Any amount given more than $25,000 will go to the Jansen Art Center of Lynden.

As to the building, the seven Terrace Apartments units have been created, Hanson said, and all but one are leased.

Work continues to make the first-floor Front Street entrance space ready for commercial, which could be either one or two separate addresses and users.

“We’re excited about the building, something that’s beautiful and right there in the heart of Lynden,” Keiper said.

The first public electric vehicle charging station in Lynden is there on the west side facing parking lot, and the electrical wiring is in for another.