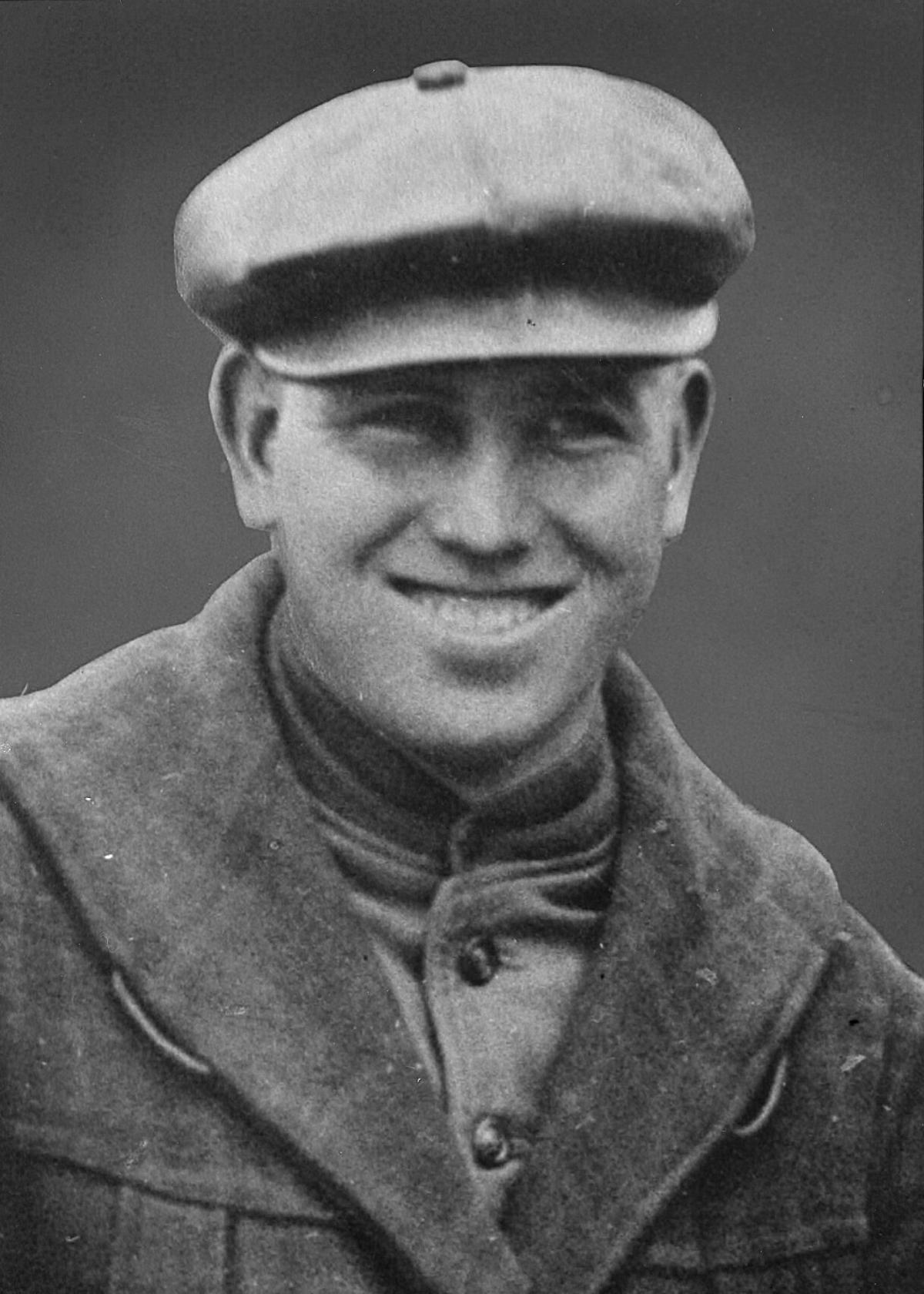 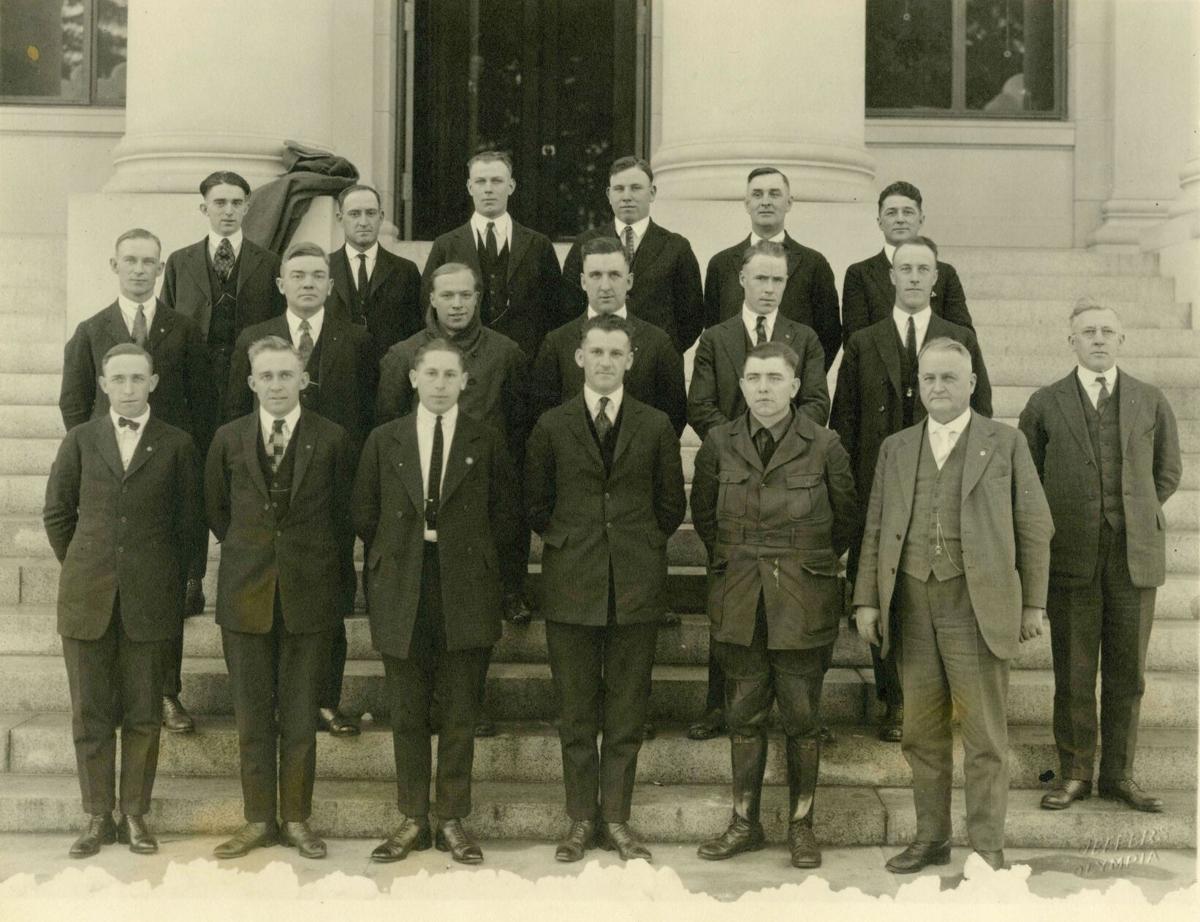 This is the first known photograph of the Washington Highway Patrol, taken in December 1922. (Courtesy photos)

Vernon Fortin died in 1923 after a collision on his motorcycle

OLYMPIA ­— As part of its centennial year celebration, the Washington State Patrol is providing information on each of the 30 individuals who have lost their lives in the line of duty in the century of service. The releases just precede the anniversary of each death.

Washington Highway Patrol Officer Vernon Fortin died on Sept. 30, 1923, five days after a motorcycle collision with a fellow officer while in route to the Lynden Fair for traffic duty. Patrolman Fortin was seriously injured and was transported to a Bellingham hospital where he succumbed to pneumonia. He was 24 years old.

Patrolman Fortin (WSP commissioned officers were not referred to as troopers until 1963) had been with the agency for 18 months after a 3½-year stint in the U.S. Army during World War I. The combat veteran was the product of a hard-working Skagit Valley farm family and left behind two small children, a grieving widow, and a heartbroken agency that numbered roughly 20 officers at the time.

Fortin was the first of 30 to die in the line of WSP duty. “Nearly a century has passed since his loss and the State of Washington still remembers his service and sacrifice with gratitude and honor,” wrote WSP spokesman Chris Loftis.

The Washington State Patrol’s first fallen officer dedicated his young life to service. Vernon George Fortin was born on Dec. 16, 1898, to Napoleon S. Fortin and Effie F.E. Fortin in Mount Vernon. He was raised on the family farm with his four brothers, Clement, Joseph, Michael and Frank, and attended school in Mount Vernon.

At just 17, Fortin joined the U.S. Army on May 16, 1916, as a private in Company C, 3rd Army M.P. Battalion in the midst of World War I. First stationed at Camp Murray, Washington, Fortin was later transferred to Camp Mills in New York. The United States joined allied forces in World War I on April 6, 1917, and Fortin deployed overseas to France and Germany. Fortin served in the regions of Chateau-Thierry, Soissons, St. Mihiel and Argonne in France during his 20 months of duty overseas.

Fortin met his future wife, Jeanne Marie, during his tour. The couple were married in Coblenz, Germany, on July 14, 1919. The pair returned to the United States where Fortin mustered out at Camp Hoboken in New Jersey on Aug. 15, 1919. The Fortins returned to the Skagit Valley and had two children: a daughter, Marcelle, and a son, Paul.

On March 18, 1922, Vernon Fortin was commissioned with the newly formed Washington State Highway Patrol and assigned to Whatcom and Skagit counties.

Fortin and fellow officer Benny Rousch were in route to the Lynden Fair for traffic duty when, while trying to make room for another vehicle, their handlebars locked together. Patrolman Fortin seriously injured his leg and shoulder trying to jump clear and was transported to a Bellingham hospital and died there.

Following his death, Fortin’s wife, Jeanne, returned to France with their 3-year-old daughter and 2-year-old son, but came back to the Mount Vernon area five years later. Jeanne taught French and later married Edward Crandall. Fortin’s son Paul passed away in 2003. His daughter, Marcelle Gorman, age 99, lives in New Jersey. She visited the National Law Enforcement Officer’s Memorial Wall in Washington, D.C., for the first time to honor her father in 2017.

The Washington State Patrol gives this tribute of Fortin: “His sacrifice would be the first of 30 during the agency’s 100 years of service to the state of Washington. Though the agency’s name and uniforms, as well as officer ranks and titles, changed through the years, the Fortin name and the photo of him smiling astride his Indian Motorcycle are iconic symbols of the service and sacrifice that have become hallmarks of the organization. We will not forget him.”

Trooper Ernest Eichhorn was struck by an impaired driver while conducting traffic control at the Puyallup Fairgrounds on Sept. 13, 1958, and died three days later on Sept. 16. He was the 15th member of the Washington State Patrol to die in the line of duty. A devoted father of four, he was also a decorated World War II veteran.  He was 33 years old.