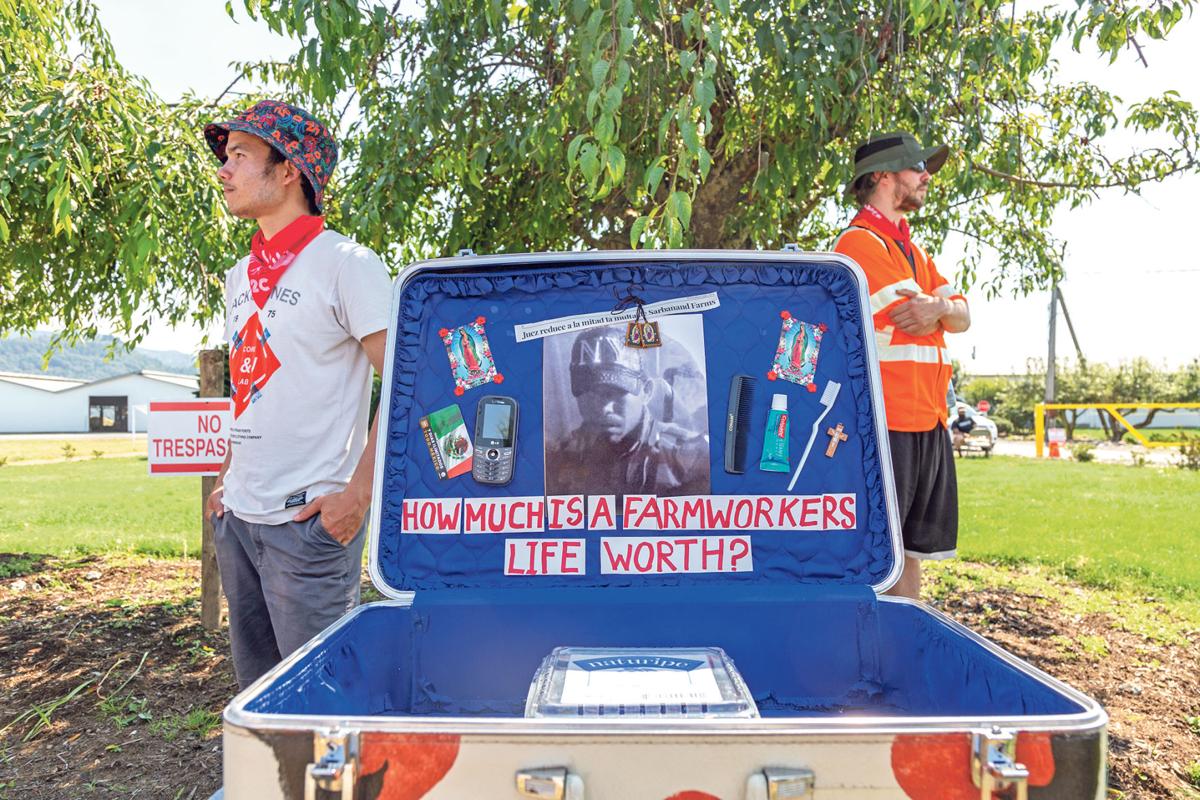 Activists stand beside the Sarbanand Farms property, where the group of about 60 marchers came to a stop. Words were spoken about last year’s events and remembrance paid to Honesto Silva Ibarra, pictured in the suitcase. (Ashley Hiruko/Lynden Tribune) 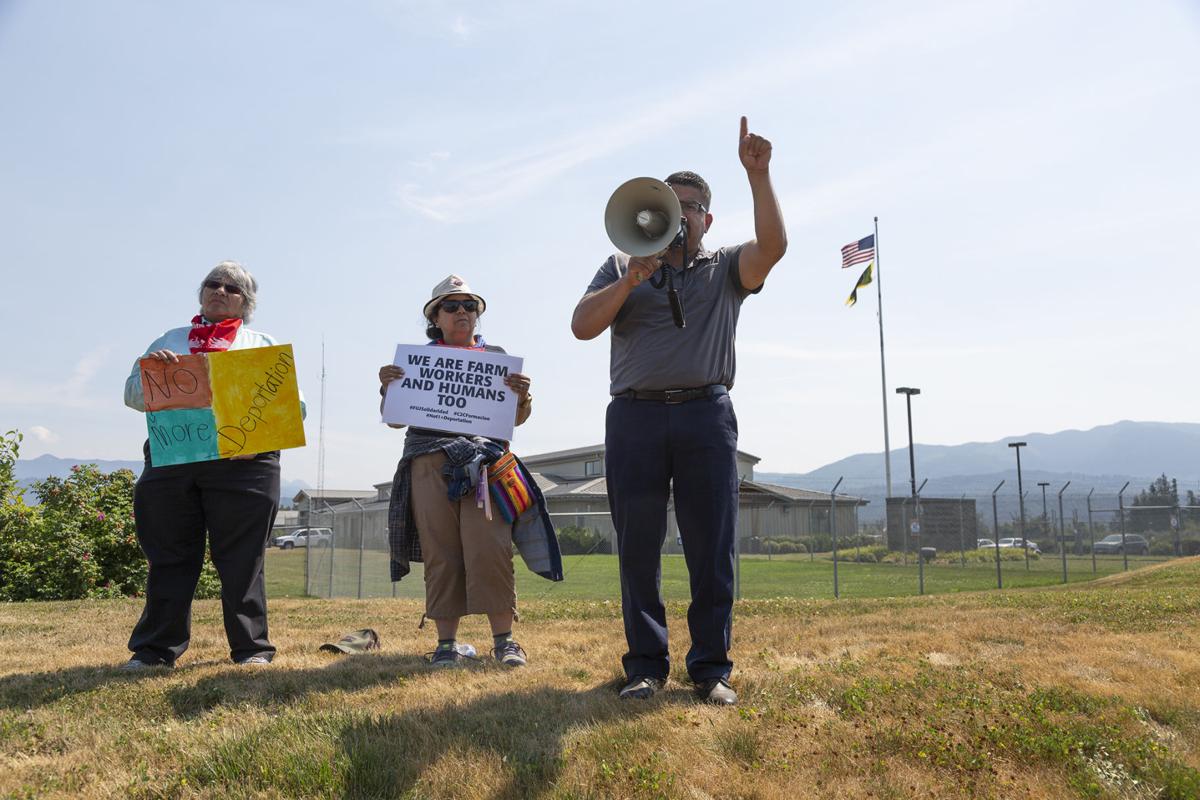 At the Sumas Border Patrol stopping point, Burien Mayor Jimmy Matta spoke of a verbal and physical assault against him on July 21 while attending the Olde Burien Block Party in the Seattle suburb. (Ashley Hiruko/Lynden Tribune)

One year since Ibarra’s death, group treks from Lynden to Sumas Sunday

SUMAS — Their echos could be heard down the road from the Sumas blueberry farm on Rock Road. By the time they reached Sarbanand Farm, the site where last year a temporary H-2A farmworker fell ill, security was already in place.

On the farm’s property outside an office building sat two men. Sunglasses shielded their faces and a drone hovered above. But the marchers, gathered for the cause by Community to Community Development, would not let them forget.

In August a year ago, Honesto Silva Ibarra died while employed by the farm of Munger Brothers LLC. A debate ensued on Ibarra’s treatment on the farm, and whether it contributed to his death at Harborview Medical Center in Seattle. It was later determined by the state Labor & Industries agency, after a six-month investigation, that the farm was not at fault for Ibarra’s death of natural causes.

Some of his coworkers who protested soon after, and were fired for not working, said that threats had been made against them and that their colleague and friend was not receiving the adequate care he needed when he brought his ailment to his employer’s attention.

The L&I investigation determined the farm was not at fault for the farmworker’s death, but did charge the farm with multiple infractions for missed meal and rest periods. On June 19 Whatcom County District Court Pro Tem Judge Dave Cottingham cut in half the $73,000 base fine first imposed

On Sunday, Aug. 5, a year after Ibarra’s death, marchers gathered at Mom’s Bar and Grill on Bender Road at 5:15 a.m. to begin the 12-mile trek to Sumas. The activists held signs and chanted as they walked to the Nooksack Northwood Casino, the Sumas Border Patrol Station on Garrison Road and then to Sarbanand Farms. The walk ended at Camp Zapata, the location on Telegraph Road where about 70 farmworkers were temporarily housed last year after being unexpectedly fired.

As they marched, cars passed by. Some honked in support, others bellowed a phrase repeated by others hanging out of their vehicles — “get a job.” Sometimes profane hand gestures accompanied the words. But the activists responded with laughter. “Kill them with kindness,” someone shouted from the single-file line.

At the Sumas Border Patrol stopping point, Burien Mayor Jimmy Matta spoke of a verbal and physical assault against him on July 21 while attending the Olde Burien Block Party in the Seattle suburb.

According to the Burien city website, Matta was “grabbed by the neck from behind and pushed to the ground by an older white man.” The suspect is believed to have been upset with Burien Ordinance 651, which states that city and police personnel will not pry into a person’s immigration status or religion.

“Someone assaulted me based on the fact that I support sanctuary cities,” Matta said, speaking to the Whatcom group.

The suspect in that altercation was also alleged to have issue with Matta’s Latin heritage. Matta grew up as a farmworker.

Locally based Save Family Farming, an organization made up of farmers and farm supporters statewide, called the protest harmful to farmworkers and consumers.

Save Family Farming said this in a statement: “Despite exoneration by in-depth government investigations, Community to Community’s leaders and supporters continue to make false accusations about the cause of the tragic death of a farm worker, about working conditions, food and other complaints. All accusations, except for missed rest breaks and late meals, have been shown to be completely false. Farmers are concerned that the repeated lies against a California-owned farm are harming the good name of family farmers throughout the county and state. With rare exception, our family farmers treat their workers with the dignity, respect and care that they deserve.”

This year, according to the farm group, Sarbanand Farms opted not to use the federal government’s H2A hiring program.

“The decision of the owners of the Sumas berry farm to not bring the guest workers back for another season can be seen as a victory for the activists opposing the guest worker program. But the results show that it is the workers who are really harmed by this action, not just the farm falsely accused of harming workers.”

Lynne Dodson, representative of the Washington State Labor Council, was gathered with activists at Sarbanand Farms as 3 p.m. rolled around.

During what the group called a “Peoples’ Tribunal,” Dodson and others demanded justice for Ibarra.