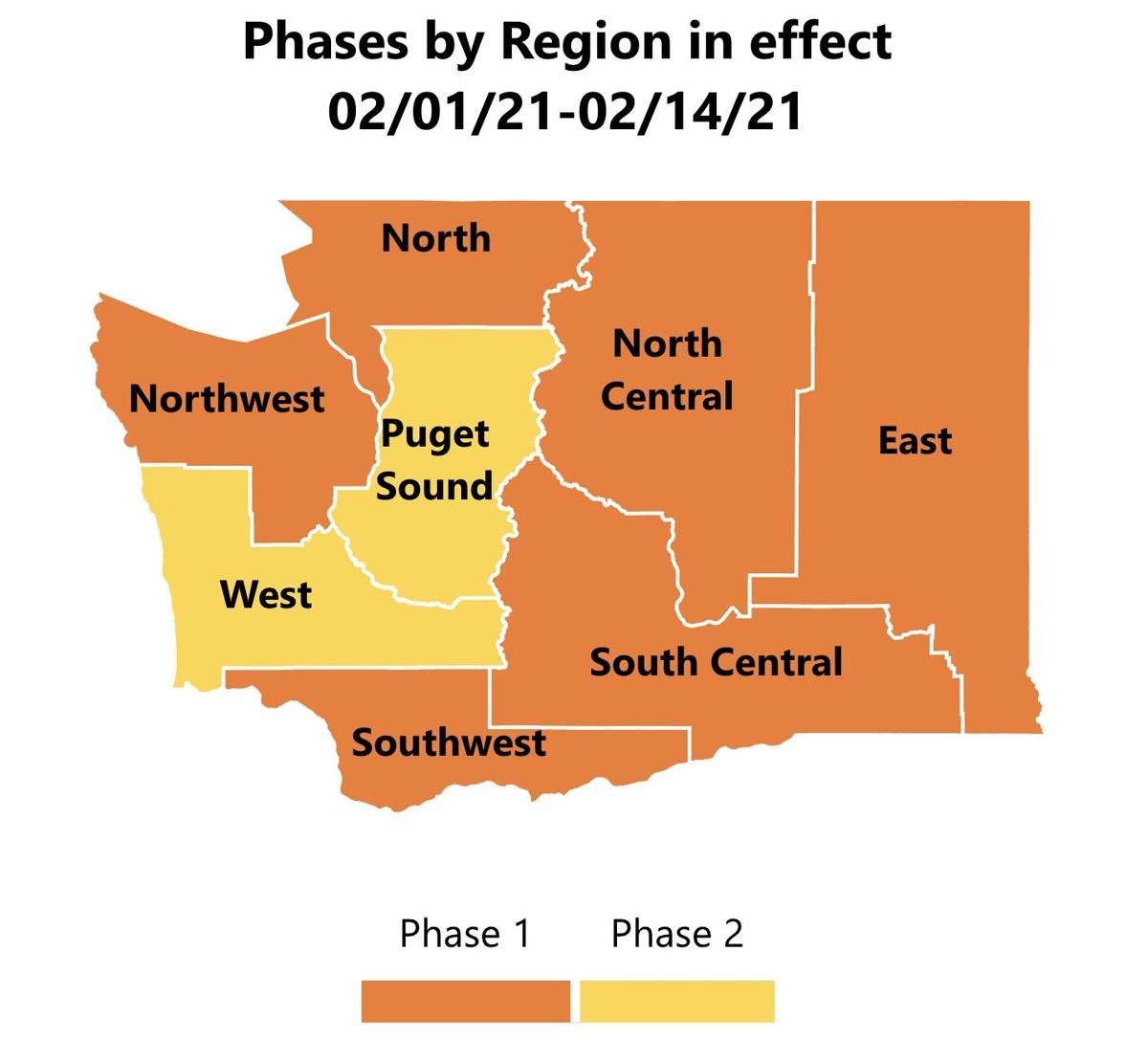 Washington is divided into eight regions in the governor’s Roadmap to Recovery plan, and so far only two regions have advanced to Phase 2. (WashingtonState Department of Health graphics)

At least three of the four metrics must be light or medium blue for advancing, with updates every other Friday. (WashingtonState Department of Health graphics)

Washington is divided into eight regions in the governor’s Roadmap to Recovery plan, and so far only two regions have advanced to Phase 2. (WashingtonState Department of Health graphics)

At least three of the four metrics must be light or medium blue for advancing, with updates every other Friday. (WashingtonState Department of Health graphics)

‘You can’t argue with the results’ saving lives, he said last week

LATEST: The next update in the governor’s Roadway to Recovery plan will be reported on Friday, Feb. 12, for implementation and possible phase movement on Feb. 15. Whatcom County has been in Phase 1 from the start. As of Tuesday, Feb. 9, the North Region was showing an improving trend on two of the determining metrics and a negative trend on two others.

OLYMPIA ­— Gov. Jay Inslee last week defended his plan to phase in the opening of businesses by region, saying he knows it goes too slow for some people.

“Everybody can have a rational argument against what we’re doing, but you can’t argue with the results, which is that we are ahead of 45 other states,” Inslee said.

According to the governor, that translates to an extra 8,000 saved lives in the state with more than 700,000 individuals already vaccinated.

However, many Republicans remain unsatisfied with Democrat Inslee’s approach, with the focus on Olympia as the Legislature is in session. Several hours before Inslee made his comments on Feb. 4, four Senate Republicans, including Doug Ericksen of Ferndale, announced they were forming a Freedom Caucus to press for fewer restrictions.

“Governor Inslee has a heavy-handed approach and I believe [it is] a tremendous infringement on people’s personal rights and liberty,” said Sen. Phil Fortunato of Auburn. He was joined by senators Jim McCune of Graham and Mike Padden of Spokane Valley, as well as Ericksen.

The governor’s COVID-19 restrictions on businesses are “taking the life savings of people that are just trying to run a family business, a family store,” Fortunato said.

While acknowledging the criticisms, Inslee said his regional approach for determining when people can open is necessary to contain the spread of COVID-19 and makes more sense than going county by county.

“The reason we did it this way was twofold,” Inslee said. “First, we’ve added a new metric of the dynamic activity in hospitalizations and ICU capacity.”

He added: “If you go to a county-based system, you might close the restaurants in Benton County and open them in Franklin County, a half mile away,” Inslee said. “I can assure you, we’d be criticized for that.”

He also responded to criticism from the Whatcom County Health Board regarding vaccine distribution inequities between counties.

As part of his effort, Inslee also said he intended to sign SB 5061 — one of several packages working their way through the Legislature — and he did so on Monday, Feb. 8.

“It both increases the minimum unemployment benefits for workers and it provides $1.7 billion in unemployment tax relief for businesses,” Inslee said.

He also highlighted the work of school systems in helping 200,000 students return to in-person education and the Seattle Seahawks for being the only NFL team without a confirmed case of COVID-19.

The vaccine allotment for Washington will be increasing soon, according to Inslee, but no firm date was given by him or his team.

“We could easily do 45,000 vaccinations today — it’s just that we’ve got to have the vaccines,” Inslee said. “That’s the good news. Once we get the vaccine, we’re going to accelerate this dramatically.”

About $1 million has also been invested in communication efforts to help establish vaccine credibility in communities and improve vaccination rates.