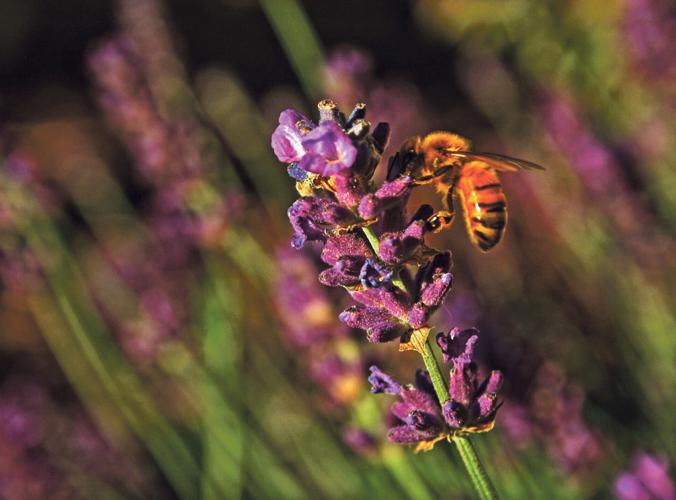 A bee rests on a lavender plant on the farm just west of Lynden. (Courtesy photo/Sara Whitehead) 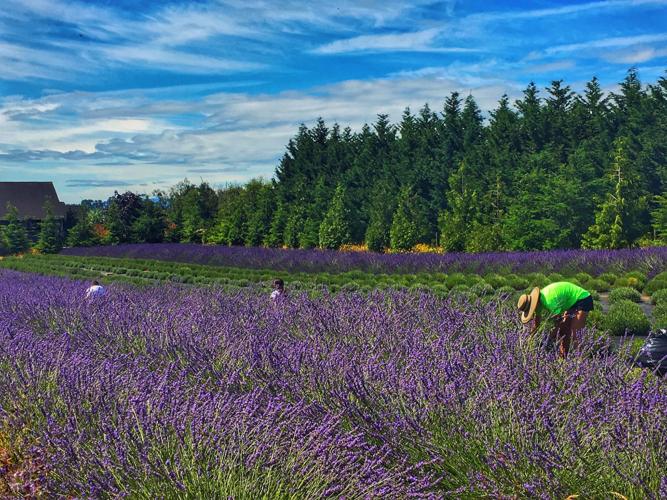 A bee rests on a lavender plant on the farm just west of Lynden. (Courtesy photo/Sara Whitehead)

Lynden couple’s farm brings together their love of biology, farming and medicine

The duo make up the working force behind Bee in Bloom, a honey and lavender farm off Birch Bay-Lynden Road that produces organic beauty products.

Sara and Brent met in the 1990s while they were undergraduate students in California. The pair, who each graduated with science degrees, fell in love in the same place they met — a chemistry lab.

After moving to their Lynden-area home, Brent and Sara wanted to do something useful with their land. Brent started beekeeping in 2011 and created Bee Healed, the company’s most popular product. Through his research on what ingredients to include in products, Brent learned about some of the benefits of lavender essential oil.

Brent’s discovery prompted Sara to do some research herself, which led her to learn that Sequim, Washington, is the number one lavender producer in the world aside from Provence, France. Soon after, Sara tested their property’s soil and learned it has the perfect conditions for lavender. Additional research on the benefits of lavender led to the realization that honey is also good for the skin.

“We decided that we wanted to live our lives in bloom. This is how we came up with Bee in Bloom. It is a combination of honey and lavender and it’s a simple statement about how we want to live our lives,” Sara said. “We want to offer something of beauty, value and health to our community.”

Brent and Sara both hold full-time jobs outside of Bee in Bloom. Brent is a practicing physician and a co-owner of Bellingham Urgent Care. Sara works as a science teacher at Meridian Middle School. However, the 2017-2018 school year will be Sara’s last year teaching so she can focus more on Bee in Bloom and help the business expand and become more of a community outreach tool.

“I think the biggest struggle for me has been trying to balance everything,” Sara said. “I love to teach. So I have finally come to the conclusion that it’s not a bad problem to have too many things that you love, but there’s got to be some balance.”

On the farm, typically three hives are being cared for at a time. The 1,600 lavender plants are divided into five varieties: super, royal velvet, folgate, maillette and grosso. The super and grosso varieties are from the intermedia, or French, family of lavender. The royal velvet, folate and maillette varieties are from the angustifolia, or English, family. The main difference between the two varieties is that the intermedia are bigger, produce more oil and have more of a camphor scent, Sara said.

Lavender plants are maintained through the use of weed cloth and weeding by hand. Lavender stems are harvested, then taken to a distiller during the summer and early fall. After the lavender is distilled, hydrosol and essential oils are collected for product use. After sitting for six months to get the best fragrance possible, the hydrosol and oil are ready for use.

Honey and beeswax are also harvested in summer, during August. Brent completes most of the wax purification process, consisting of smashing honeycomb up with potato smashers and later straining the honey with cheesecloth to separate the honey and beeswax. The honey is safe to eat, but is saved for product because the farm doesn’t have enough bees to produce honey for both eating and skin care.

“The combination of the lavender and the honey is what makes it magical,” Sara said.

Both the honey and lavender care processes are done completely with raw ingredients.

Bee in Bloom has made a positive impact on customers who have struggled with skin care throughout their lives, Sara said. Some customers she mentions, including cancer patients and people struggling with eczema, have had positive experiences with their products.

“When I’m making product and I’m not harvesting, I do think about the people this is going to go to. So when it’s hard — I know it sounds cheesy — I’ll think about it and I’ll offer just a kind of prayer that this will be helpful to someone,” Sara said.

Moving forward, Sara and Brent hope to expand upon the positive impact they have made already in the community. Growing the company as much as possible while keeping it authentic is now the overarching goal. Sara hopes this will look like getting into more stores, and eventually opening a tourist farm for people to learn about lavender and the distillation process.

Bee in Bloom products have been donated for fundraiser events and to local charities. Another large goal for the business is to create products such as T-shirts, bracelets and hats with phrases such as “bee kind,” with all sale proceeds going to charities such as New Way Ministries, Sara said.

“I love having something to give that came from my hands that I can use to raise money for local causes,” Sara said. “I’m so grateful the community can come and ask.”

Bee in Bloom products can be purchased locally at the Green Barn, Cheeks, the Lynden Pioneer Museum gift shop and select Haggen stores. The Whiteheads also use craft and trade shows, Etsy and their website, www.beeinbloom.com.