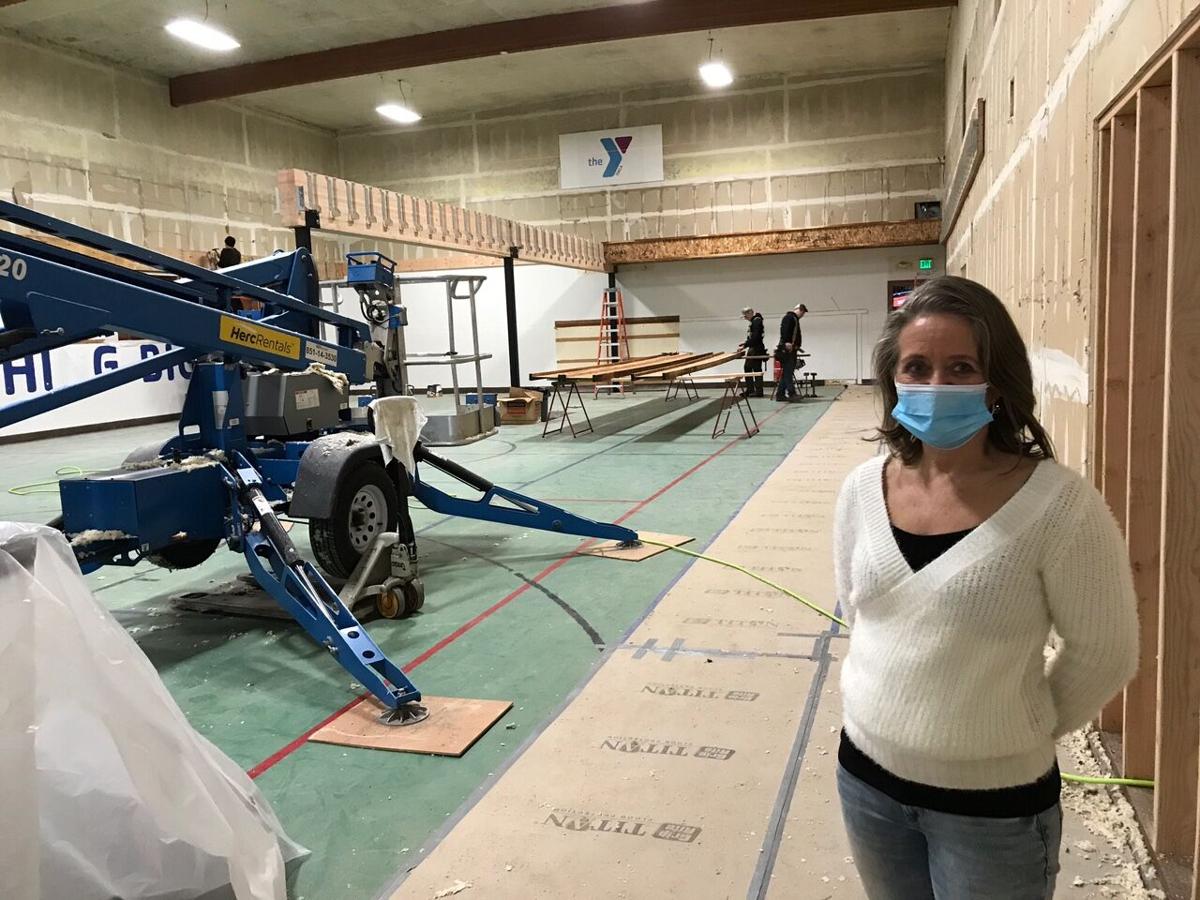 Jeannie Davidson of Forge Fitness stands at the entrance to what used to be an open gym, now being converted into two floors for exercise, at 100 Drayton St. (Calvin Bratt/Lynden Tribune) 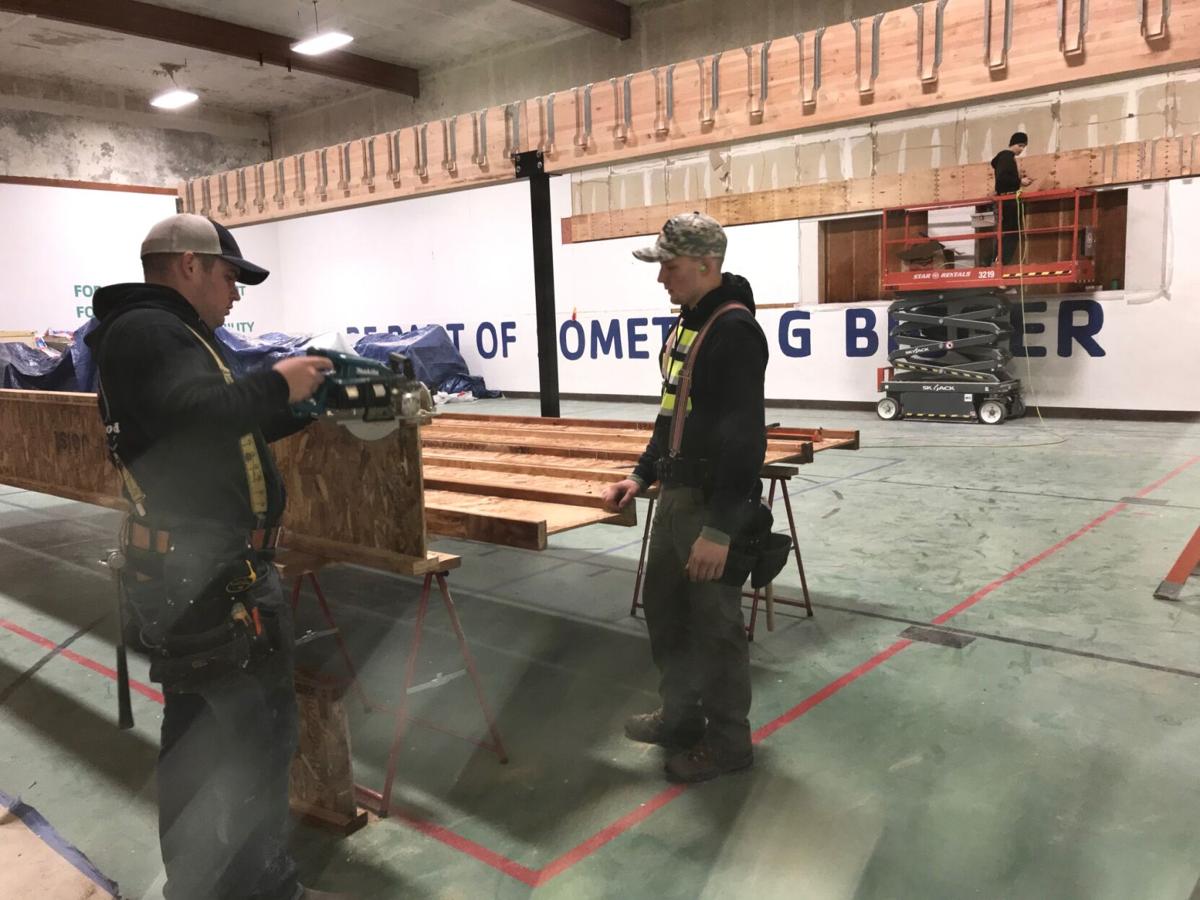 Remodeling is first priority for full reopening in March, but pool is staying open now

LYNDEN ­— The new operators of the recreation center at 100 Drayton St. say they hope for a March opening after remodeling.

However, the pool remains open and is now being managed by Leanne Holleman, local high school swim instructor, reports Jeannie Davidson, co-owner with her husband, Brian, of Forge Fitness.

As of the turn of the year, Forge Fitness is now into its five-year lease of the facility from the City of Lynden, owner, and the first order of business is some extensive remodeling of the 42-year-old structure.

“We are moving along with renovations at a pretty good clip,” Jeannie Davidson emailed to the Tribune this week. “This week we started to add our upstairs group fitness room. The [former] gymnasium will act as main floor for our weights and equipment and also our second floor [for] group fitness. There will be a party room available for rent and our bathrooms and entry are getting a good-sized facelift! We have a few other plans up our sleeve as well, but that will likely be phase two.

The pool will be closed only to take its ceiling down, she said. Sign-ups for aquatic classes and lap swim are now being taken through Forge Fitness (www.forgefitgym.com).

The online schedule shows pairs of aquatics classes happening at 10 and 11 a.m., then lap swim all the way through the afternoon.

For months ending 2020, the city had a short-term agreement with the nonprofit Let’s Pool Together to manage the pool and to schedule free adult aerobics classes for the community as well as some youth swimming. The city used some of its CARES Act dollars to make everything free, but that has now ended.

By agreement with the city, Forge Fitness is now the sole operator running what used to be a Whatcom Family YMCA affiliate in Lynden. It was closed last March, and was relinquished by the Y for financial reasons.

It is a 5-year lease with the city for Forge, with renewal options. “This is a long-term commitment to the community,” Davidson said.

The couple first got into this realm by being partners with Christie and Kyle Duque in opening e2 Fitness in Lynden in 2014.

“Prior to that I had never belonged to a gym and had no interest!” Jeannie said. “I was 48, and was feeling every year of it when we started training as a family. The change in my physical and emotional health was life-changing for me. The atmosphere was so encouraging and uplifting it was contagious.  Before I knew it, I was participating in events such as Go RUCK, Spartan races, half marathons and a lot of trail runs!”

In 2017 the Davidsons became sole owners and renamed E2  to Forge Fitness. They still work closely with the Duques, and Christie is a head trainer.

“When we heard the YMCA was moving out of that building, it seemed like a great fit. Adding a pool to our lineup will be great for our members and the addition of a little more space leaves open possibilities for some new fun additions to offer the community as well,” she wrote.

Forge Fitness is essentially splitting the costs of renovation with the city, she said.

“One thing Forge strives to offer is a very clean facility, so we will be replacing almost every surface in the building to bright, new standards. Windows will bring in natural light, flooring will be replaced, and we will be adding additional space.

“We hope to create a space on par with a new facility,” she said.

With City Park just to the north, the pair hope to make the Drayton facility a little more connected to the nearby park, trails, tennis and basketball courts.

In the meantime until the renovated facility reopens, Forge Fitness  welcomes any new members at the current location at 110 Third St., on the corner with Grover. Insurance memberships are offered.

“My hope is to be able to offer the community what I was offered six years ago, a place that encourages growth physically, emotionally and spiritually,” Jeannie Davidson said. “We strive to offer an encouraging and challenging environment for every age and ability from the high school/college athletes training in competitive sports to our seniors working on mobility. My daughters were on high school swim teams and one even taught lessons at the YMCA for years, so I know having a place for school teams and early childhood water safety is very important. All in all, I hope we will be a positive part of the community and can truly be a place where iron sharpens iron!”