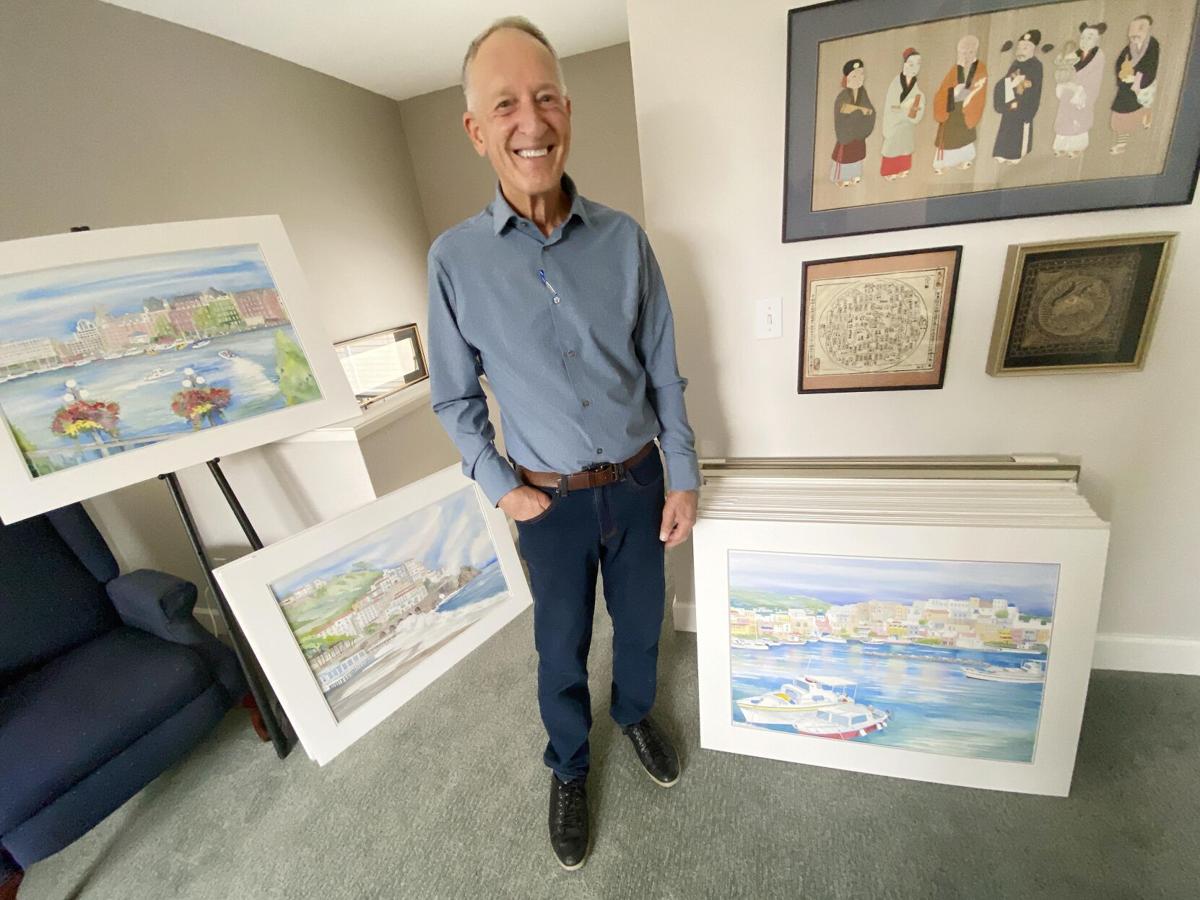 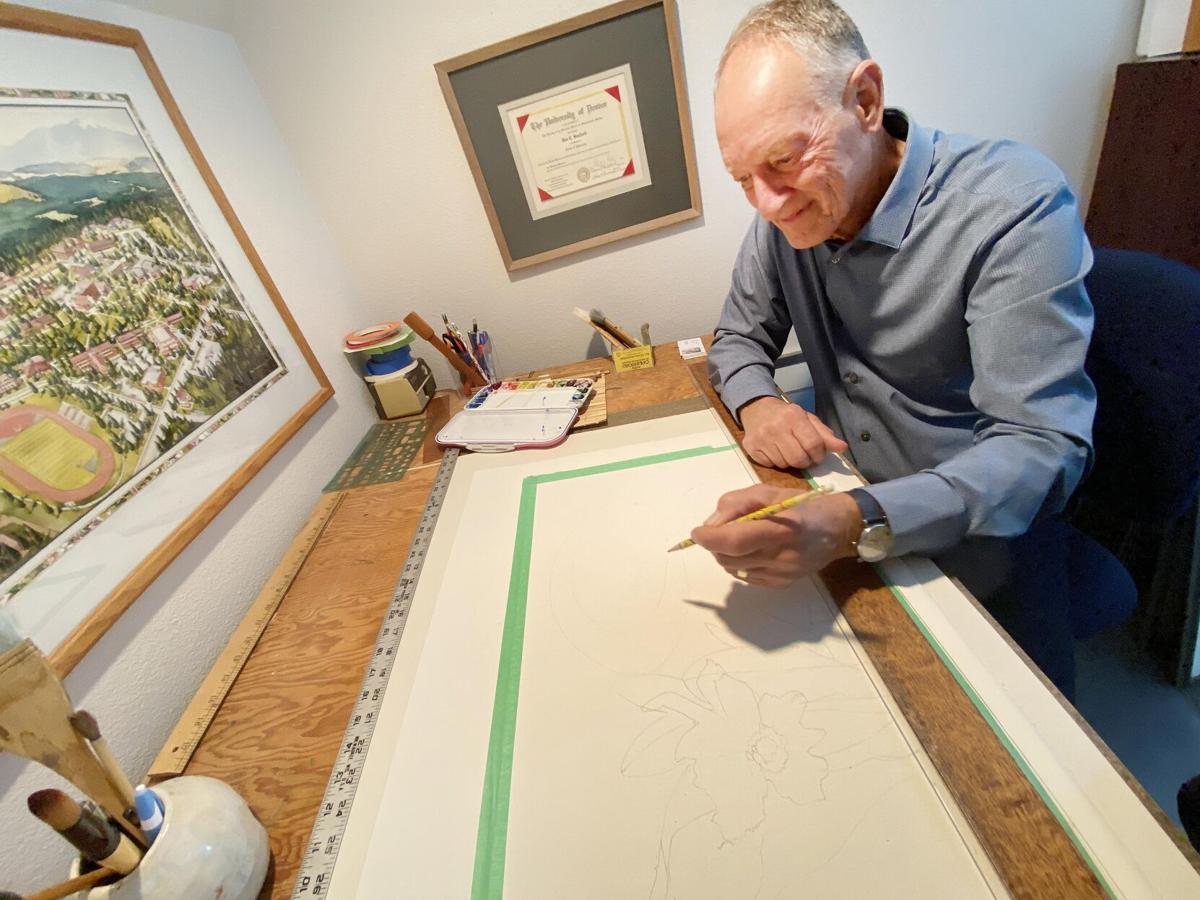 LYNDEN — Not all of Dan Sanford’s paintings are of the water. But many of them are.

Whether it’s a coincidence the Lynden resident is a watercolor artist, he does say the medium works well with water, and with the sky.

“It’s fun to see what the watercolors will do to surprise you,” he said recently. “I’ve tried others (mediums), but I always come back to watercolors.”

It was 40 years ago when Sanford’s watercolor paintings were on exhibit for the first time.

That show, the Lilac Festival Art Exhibit in Spokane, was the first of many opportunities for the artist to bring his world’s view to the public’s eye.

Sanford’s eye, Sanford’s world view, has been developing since he was a child.

“I started enjoying painting in elementary school when art teachers were visiting my classroom and taught us using either tempura or watercolors,” Sanford said. “Then my teachers started sending my work to the Central Washington Fair in Yakima, where I lived as a child. To my surprise, I was getting blue ribbons.”

Today, Sanford works from his home studios in Lynden and in Birch Bay.

Sanford’s paintings portray images of the Pacific Northwest where he has lived most of his life. Although water is a common component to his work, Sanford’s paintings also focus on gardens, flowers, and scenery from various trips he and his wife Barbara have made to Asia, Europe, and other parts of the United States.

“Florals are easier,” Sanford said. “You don’t have to be as precise. You can let it flow naturally. You can hardly get it wrong.”

Sanford’s biography states that a “tradition of quick application of color and strong emphasis on mood give fresh results” to his paintings.

“His paintings convey contrasting feelings of festivity and serenity,” the biography states. “The artist leads the viewer to experience delight in the harmony of contrasting color, reflection, surprising foreground, and majestic distant images. Lately, his paintings tend to be more a study of architecture. His skill in structural design can be attributed to his experience as a youth doing drafting work for his architect father.”

By the time Sanford was in junior high school, his parents sent him to a summer art workshop where he “learned form and composition, more than anything else.”

“Then at college I dabbled in art taking an elective — however my professor suggested I paint mostly outside of class as I was too advanced for her course,” Sanford said. “As a graduate student studying for a year in Taiwan, I was thrilled with the inspiration of traditional Chinese art and spent a lot of time visiting Taipei art studios. For a while I attempted to paint using only black ink.”

“He introduced me to drawing and to art,” Sanford said. “In high school, he put me to work at his architecture firm. He’d draw a building, I’d color it in.”

Although Sanford is, as understatements go, an accomplished artist, the Lynden man is an academically-inclined artist. He uses both sides of his brain in ways most others don’t.

Although Sanford considers art his avocation, he easily could have careered as a watercolor artist. Fact is, although he hasn’t made his living off art, Sanford’s work shows not only his cultural interests but also his precision he learned from his father.

Also interesting is Sanford’s use of bold colors, an uncommon trait in watercolor painting.

“I like to sharpen it with bright colors,” he said.

On several occasions, Sanford’s work has been on display at the Jansen Art Center. Currently, he has a few pieces at Hamann’s Gallery in Bellingham.

Since his first exhibit back home in Spokane four decades ago, Sanford has participated in many shows jointly with the Inland Northwest Watercolor Society.

He also has exhibited several times on the campus of Whitworth University where he taught.

Sanford has had numerous one person shows in Spokane and Bellingham including exhibits at the Koehler Gallery (Spokane), the St. Joseph PeaceHealth Cancer Center, the ‘J,’ and the Spokane Metropolitan Center for Performing Arts.