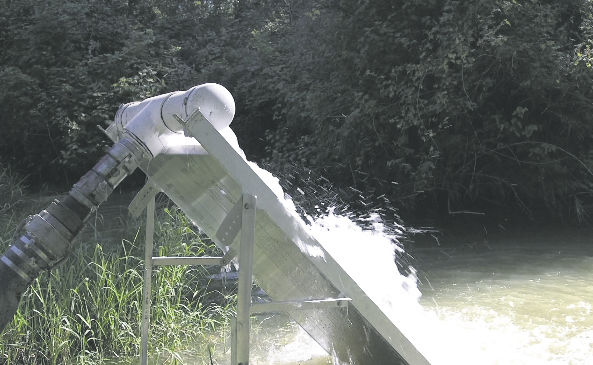 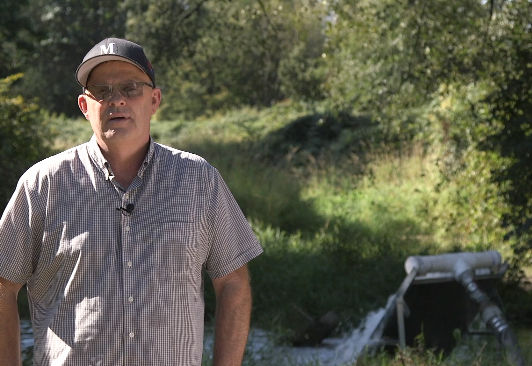 LYNDEN — This summer was again a dry one, but Bertrand Creek flowed in September at its highest level in decades. Credit farmer-led conservation and augmentation efforts, the Whatcom Family Farmers group says.

Over the last several years, local farmers have largely shifted their irrigation from surface water sources such as fish-bearing streams to wells tapping into underground water.

And now it is to a new level.

This year, Bertrand Creek flowed with cold, clear water at a rate of six to seven cubic feet per second. For comparision, that is about four times what the creek’s flow was (1.58 cfs) in a summer month of 14 years ago, August 2003, according to Gerald Baron, speaking for Family Farmers.

And one cubic foot of the water flow was contributed by a pump and pipe from a legal well about 1,100 feet away from Bertrand.

Baron calls it “a minor miracle of habitat restoration.”

In 2004, farmers recognized the stream depletion problem and formed the Bertrand Watershed Improvement District northwest of Lynden. It was the first of now six farmer-organized and -run government entities designed to address water issues on a drainage-by-drainage basis.

After more than two years of paperwork, farmers were finally granted a groundwater permit for this Bertrand project. While they bore much of the cost of the augmentation idea, a Washington State Department of Ecology grant also helped.

Pumping began on Sept. 12 and continued until about last week when fall rains take over filling streams.

“Farmers understand this is something we need to do,” said Marty Maberry, berry grower and co-owner of Maberry Packing. “Habitat is only one factor affecting fish, but it is one that as farmers we can address. This shows we understand the need for stream flow for habitat and we respect and support tribal treaty rights.”

Maberry points out that almost all Whatcom berry farmers by now — using micro-irrigation techniques — have more than cut in half their need for irrigation water. It has gone from about 900 gallons per minute per acre to about 400.

However, both raspberry and blueberry acreage continued to increase in the county, requiring a proactive stance by farmers to address low flows.

The approach has involved conservation, water rights conversions from surface to groundwater, and direct augmentation such as this project on Bertrand, Baron says.

The late-summer months of August and September naturally are the lowest for stream flow, including legal withdrawals from streams by farmers for irrigation. But that situation can be remedied by augmentation, he says.

These are additional details of the issue:

• The Bertrand replenishment effort amounts to more than 3,000 gallons per minute, or almost 4.5 million gallons per 24-hour day. To put that flow into perspective, it could fill an Olympic-sized swimming pool nearly seven times over in a day.

• Bertrand is a relatively small cross-border stream draining more land in Canada than in the United States. North of the 49th parallel it flows through farm country marked by growing urbanization.

Baron says that Bertrand’s flow into the United States was, as recently as a year ago, “further compromised by a dam placed across the stream just north of the border, completely stopping any flow from Canada.”

• Since 2010 farmers have been gaining the right to withdraw groundwater instead of stream water. This means that their irrigation water now comes from wells some distance from a creek.

This had already made a big difference for Bertrand, so that its August 2015 flow was up to six cubic feet per second, or 2,700 gallons per minute.

• A flow gauge located on Rathbone Road near where the Bertrand empties into the Nooksack River confirms that water pumped in upstream is maintained all the way to the river.

• Augmentation of a stream can be seen as “accelerating the natural seepage from groundwater,” Baron says.

The principle of “hydraulic continuity” — meaning a draw of groundwater has an impact on surface water — has increasingly come into play in recent Washington State legal decisions.

• Maberry claims that court cases limiting innovative water management are a hindrance to this kind of project, however.

“The Foster decision of the Washington Supreme Court and Ecology’s position on it of a one-to-one equivalence of groundwater and surface water for instream flows is not science-based and prevents an awful lot of good work being done, including further surface-to-groundwater rights conversions,” Maberry said.

He favors an original version of the “Hirst fix” bill now stalled in the state legislature since it also included a “Foster fix.” A combined remedy is high on farmers’ list of priorities, he said.

Bertrand can be just a start of augmentation to improve fish habitat, but it will take government and tribal leaders’ support to happen, Maberry said.