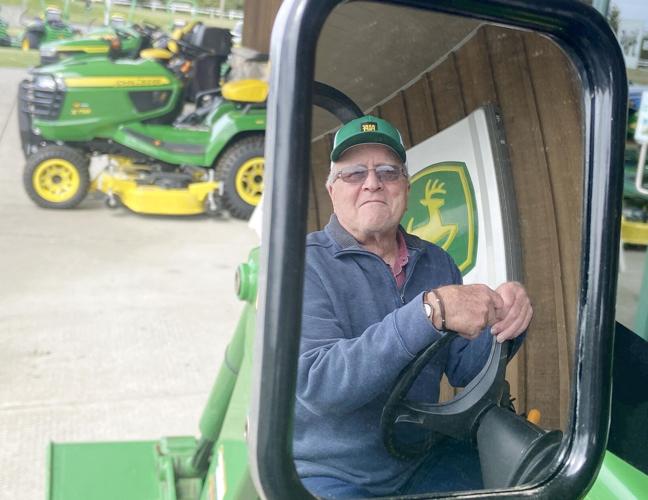 On May 15, Mike Adkinson of Lynden will begin a 1,700-mile journey to Minnesota – on his John Deere tractor – to raise Parkinson’s awareness. A year ago, his brother Dan was diagnosed with Parkinson’s. (Bill Helm/Lynden Tribune) 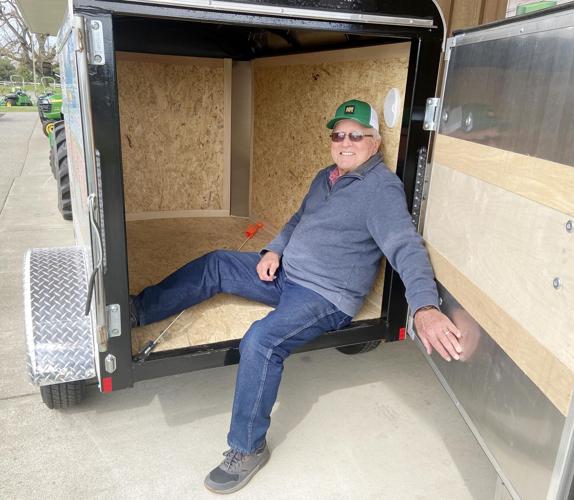 Mike Adkinson will tow this trailer behind his John Deere to store some travel necessities. (Bill Helm/Lynden Tribune)

On May 15, Mike Adkinson of Lynden will begin a 1,700-mile journey to Minnesota – on his John Deere tractor – to raise Parkinson’s awareness. A year ago, his brother Dan was diagnosed with Parkinson’s. (Bill Helm/Lynden Tribune)

Mike Adkinson will tow this trailer behind his John Deere to store some travel necessities. (Bill Helm/Lynden Tribune)

LYNDEN — A year ago, Dan Adkinson was diagnosed with Parkinson’s disease. His brother, a Lynden resident named Mike Adkinson, is days away from navigating his tractor about 1,700 miles to Minnesota to raise money – and to raise Parkinson’s awareness.

Turns out his brother-in-law, in Minnesota, said awhile back he could use a tractor. So Mike Adkinson will kill two birds with one stone, proverbially that is.

On May 15, Mike Adkinson will go east, this not-so-young man of 76, from Whatcom to Perch Lake. Adkinson will raise money for APDA (American Parkinson Disease Association) and will drop off the 2008 John Deere tractor to Mike Raich, his brother-in-law.

Raich said recently that his brother-in-law’s plans don’t surprise him.

“He’s always been a giving individual and he’s never been risk averse,” Raich said. “Said he needed a challenge and at the same time can bring awareness to Parkinson’s.”

Adkinson explained that the original reason for driving the tractor to Minnesota “raised its head wheels when my brother-in-law wanted my tractor.”

“So we would laugh about it for a couple years and then I decided I need a challenge and then the Parkinson’s thing raised its ugly head and so then I figured maybe I can raise some money by doing this,” Mike Adkinson said.

Dan Adkinson, now 80, said he “can’t believe” his little brother is getting ready to drive a tractor more than half-way across the country to bring awareness to Parkinson’s.

“He’s really put a lot of effort into this,” Dan Adkinson said. “It’s amazing, really. It’s kind of hard to explain how I feel about it. It blows me away that he’s doing this.”

Mike Adkinson will drive the street-legal tractor he’s taking to Mike Raich, his brother-in-law, and he’ll also tow a trailer that will be combination storage unit/bedroom/advertising for the trip.

“The trailer would give us a billboard for having donor stickers on and display those on the trip so that it over encourage people to donate and advertise their business a bit,” Mike Adkinson said. He said that the money “will go directly to the American Parkinson’s Disease Association in the Pacific Northwest.”

Adkinson’s 1,700-plus mile tractor trip for Parkinson’s is about as well-planned as possible, short of where he’ll stop each night.

“I have no schedule,” Mike Adkinson said. “I’m very comfortable with not having an itinerary all planned out. Once I leave here, where I stop and how long I stop would be totally up to the circumstances of that time. Some days I may stay in the spot where I’m at for a day or two. If things present themselves, (such as) an opportunity to speak to a group or talk about Parkinson’s or to greet people who may be dealing with Parkinson’s.”

On his journey, Adkinson will use social media so “people can follow the trip and see what kind of craziness is going on out there with the tractor.”

‘His energy is outrageous’

When he arrives in Minnesota, Mike Adkinson’s wife Phyllis will have already arrived. His best friend and supporter, Phyllis will begin to drive to Minnesota once Mike is about half-way there, which she said is about Billings, Montana. They’ll spend a little time together before they continue the journey separately.

“I’m very excited for him,” Phyllis Adkinson said. “His energy is outrageous. But I’m nervous. I’ll be worried about him for sure.”

Mike Adkinson explained that one of his primary routes will be Highway 20 N. Cascade Pass “and that’s why I’ve got to wait till the snow clears on the pass.”

“A couple requests at the state patrol offices have asked for me to use the shoulders when they are available, do not travel at night and to make sure that I allow people to get by whatever I can do so,” Adkinson said.

Adkinson said he will stop occasionally to refuel, to have something to eat and to drink “and to make sure that my old body doesn’t seize up on me.”

Meet Mike Adkinson at 3:30 p.m. Saturday, May 14 at Kulshan Brewery and wish him good luck on his tractor journey to raise Parkinson’s awareness. Kulshan Brewery is at 1538 Kentucky St., Bellingham.