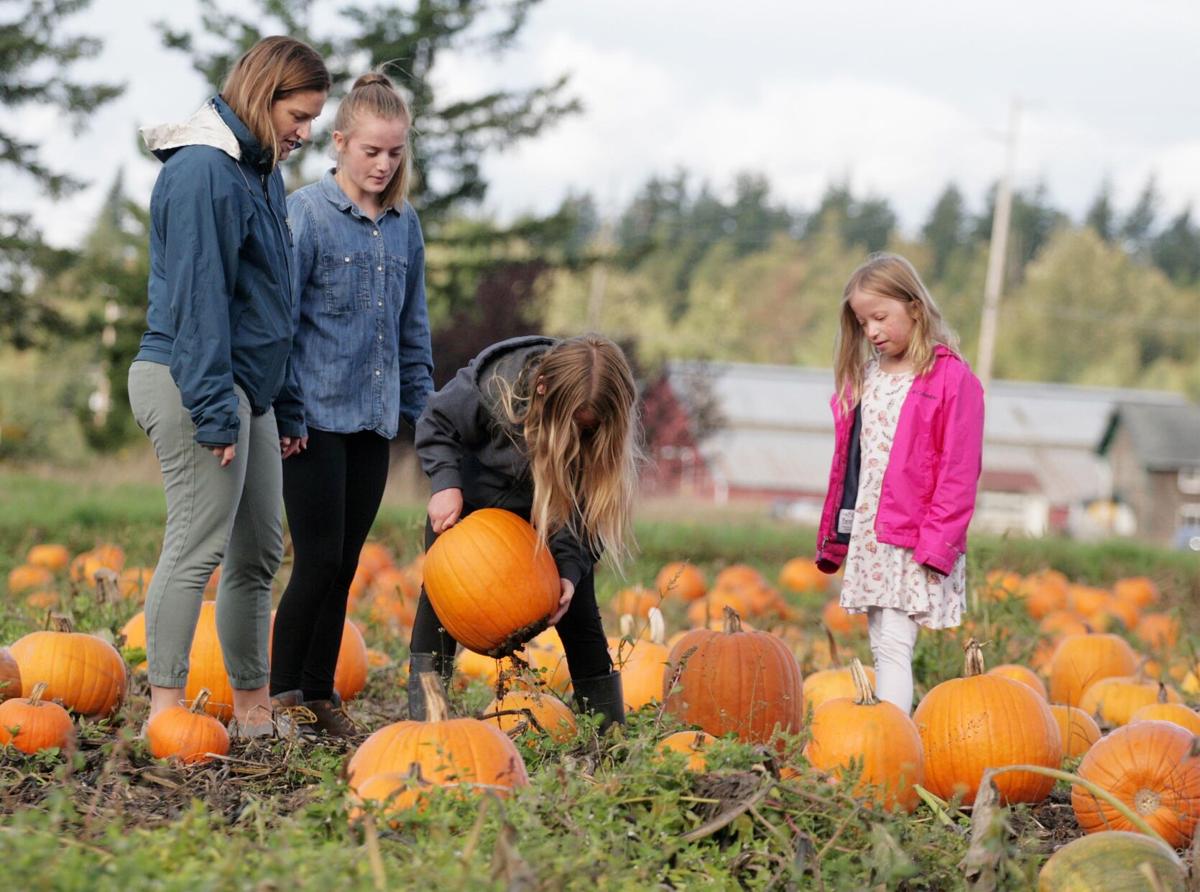 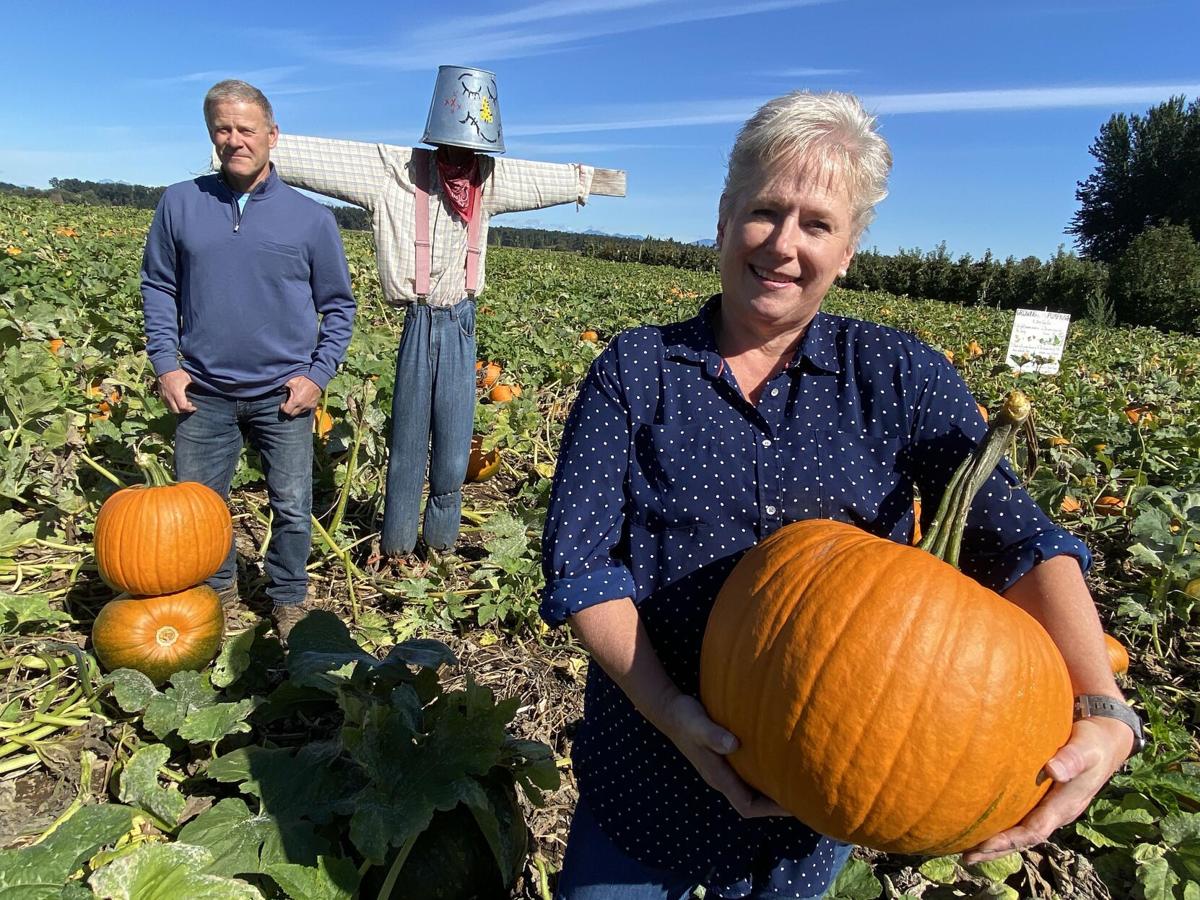 Derek and Debi Gavette in the pumpkin patch at their Stoney Ridge Farm, in Everson. Although the Gavettes still grow apples, pumpkins have taken over their business. (Bill Helm/Lynden Tribune)

Derek and Debi Gavette in the pumpkin patch at their Stoney Ridge Farm, in Everson. Although the Gavettes still grow apples, pumpkins have taken over their business. (Bill Helm/Lynden Tribune)

WHATCOM— For Bekah Blankers, it’s all about the seeds.

Pumpkin seeds, that is.

Since she was about as tall as her youngest child, Blankers has enjoyed the transformation of pumpkins to jack-o’lanterns.

Now a mother of three girls, the Lynden resident and her daughters recently went pumpkin picking.

As 12-year-old Alina, 10-year-old Olivia and 8-year-old Gabby picked pumpkins, then strolled through the patch, Blankers thought back when she was their age – and what she enjoyed most about what has become a multi-generational ritual.

“When I was a little kid, mom carved them,” Blankers said. “The night of Halloween, my family would have the carved pumpkins ready. We’d put candles in them. You could see their faces glowing.”

As much as Blankers relished Halloween each year, it was actually the pumpkin seeds that had her heart.

“As a kid I had no idea how much work it was to separate the pulp from the seeds,” she said. “I really love gorging on the seeds. Collecting the seeds, mom roasting them. That was my favorite part.”

These days, Blankers is the one doing the roasting. In fact, she does a couple of varieties, including cinnamon and sugar.

“The girls really love them,” she said.

Each year, Blankers and her daughters visit Willetta Farm to pick their carving pumpkins. One of two farms in the area (both are in Everson) where people can pick their own pumpkins. The other is Stoney Ridge Farm.

Recently, folks from Willetta and Stoney Ridge farms shared a few secrets on picking the right pumpkin for carving.

The Willetta Farm triumvirate of Sarah and Bryn DeVries, and Treva Hammingh explained that the eating pumpkins are generally smaller, with thicker, denser flesh. Eating pumpkins are also called pie (or sugar) pumpkins.

Used to be that of carving pumpkins were known as cow pumpkins. A carving pumpkin, according to Willetta, has a thinner outer shell, and less flesh for easier carving.

Although all pumpkins are edible, Willetta said that pie or sugar pumpkins have a sweeter flavor.

Because pumpkins grow laying on the ground, it’s not uncommon to find that the bottom has rot on it, according to Debi and Derek Gavette of Stoney Ridge Farm.

“You don’t want a soft spot,” Derek Gavette said. “So you need to check them.”

If you find a pretty pumpkin, you’re probably looking at a carving pumpkin, he said.

“Those varieties are decorational and edible,” Derek Gavette said.

Both Stoney Ridge and Willetta say they grow enough pumpkins each year so children of all ages can pick their carving pumpkin at least until late-October.

“We plant approximately 2000 seeds each year in our patch,” Willetta said. “It’s our goal to grow enough pumpkins that you still have a lot of choices on the last weekend of the month.”

A place for families

It’s been awhile since Stoney Ridge’s primary source of revenue was apples. Folks bought Stoney Ridge apples, and business was steady. But a funny thing happened on the way to being apple proprietors: the Gavettes had about two dozen pumpkins on the grounds.

“A woman called and asked if they could pick some of the pumpkins,” Debi Gavette said. “Not an hour later, another woman called. That night I told Derek we had to replace the pumpkins. I did that six times. Eventually, I bought a bin of pumpkins … then, we decided to get serious with the pumpkins.”

With apples, the Gavettes have a business. With pumpkins, that business has become more of an experience.

William and Henrietta Ripperda were second generation owners of the dairy farm that is now Willetta Farm. Although Willetta stated that it’s important to stay away from pumpkins with rot, picking a carving pumpkin is much about “personal preference.”

“We try to grow a variety of shapes and sizes so that everyone can find something they like,” Willetta said. “For some, they know what design they want to carve, and they must find a pumpkin that fits their inspiration. For others, their inspiration comes from the pumpkin itself, and its size and shape will determine the carving design.”

Inspiration, for the Blankers family, to keep their family rituals alive.

“My favorite thing about this place is that it’s so quaint, such a personal family feel,” Bekah Blankers said. “There’s so many things about this place, not just the pumpkins. The wagon rides, the horses, the donuts. It’s just a special place. We really love it.”

Visit willettafarm.weebly.com and stoneyridgefarm.com for hours of operation or for more information.