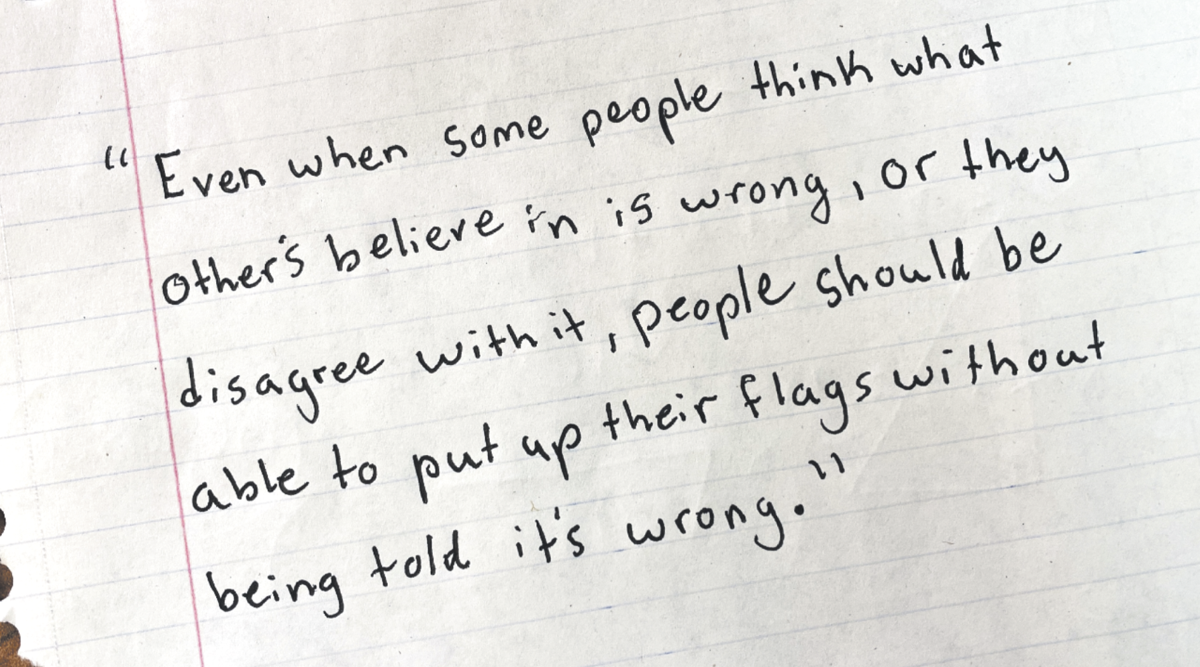 However they composed originally, the students were asked to put some of their copy in their own handwritten script. This letter is of another student, Karmi Ryan, about whether an association home dweller can put up a controversial flag.

This letter is of Emmy Duke, from her full letter. 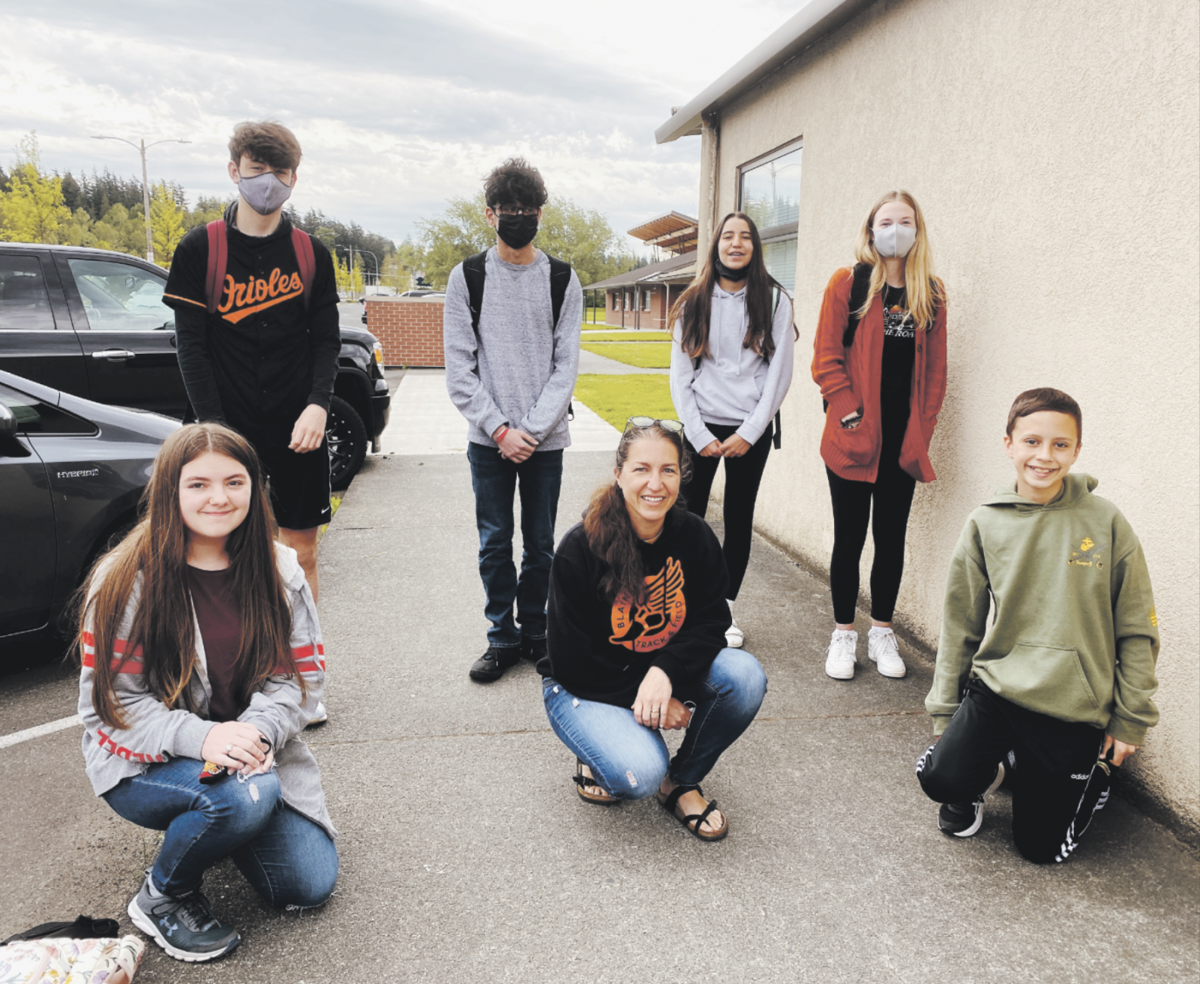 This handwritten text is of another student, Jayden Winslow.

Blaine teacher prompts them, submits letter to the editor

BLAINE — Middle school teacher Megan Schutt stood in front of her eighth graders one day and provoked them with this bold assertion: “I can say whatever I want because this is a free country.”

Is that really true? In all circumstances? Or are there limits? And who decides those limits?

Well, that could get some 100 young teens thinking and talking and doing research at a deeper level.

Every year, Schutt delves with her eighth graders into a study of the U.S. Supreme Court and cases that relate to the Constitution as the foundation of American law.

This year, as she is earning a specialty endorsement in gifted education through Whitworth University of Spokane, Schutt took her assignment a step further. She had her students think about what the Bill of Rights, the first 10 amendments to the Constitution, mean and in particular the famous First Amendment and its protection of free expression.

Working also with a language arts teacher, students of Schutte wrote opinion statements on a free-speech issue in the news in a way that could be submitted as a letter to the editor. Some of the best were selected by a peer editorial board and sent on to the Lynden Tribune and Ferndale Record.

These are three of those students’ pieces:

Over the last year, you’ve probably experienced some dislike for masks. They’re itchy, uncomfortable and hard to breathe in. But does that make them unconstitutional? No, it doesn’t.

One reason would be company policies. An example is “only customers can use the bathroom.” Journalist and published author Al Tompkins put it well when he wrote, “Think of it like this: The government has the right to ban smoking in public places because your smoking can affect my health. And some places have signs that say, ‘No shirt, no shoes, no service.’ Just add ‘no mask’ to the sign.” Nobody has the power to make you wear a mask, but your activities will be very limited if you don’t.

Many people dislike mask mandates because they believe they violate their rights. But these people seem to forget that the reason we have rights is for the freedom and safety of our citizens. Plus, masks do not make you unable to express yourself. Katerina Kaganovitch, working in the New Jersey Attorney General’s Office [Division on Civil Rights], writes, “The constitutionality of mask mandates rests in their proven promise to protect the safety of the community. Moreover, the Constitution also provides Congress and the executive with pathways to expand mask mandates to the entire nation. ... Yes, you have rights, but so does the community whose lives depend on it.”

For anyone out there still choosing not to wear a mask, if potentially saving the lives of yourself and others isn’t enough for you, know that your actions might be very limited without one. Please, just wear a mask. It’s a health issue, not a political one.

Imagine putting up a flag and then getting a letter demanding that you bring it down. In some cases it’s not the size or shape of the flag that’s the matter, it’s the design. Should renters and homeowners be able to put up any flag to their liking?

The First Amendment states that “Congress shall make no law ... abridging the freedom of speech...” This means you can express yourself in almost any way and the government cannot say otherwise. Shouldn’t this apply to renters and homeowners?

A flag may meet code for size or shape, but the design on the flag could be in question. There was a case in Colorado where a man named David Pendery hung a rainbow pride flag outside his home and then received a letter from his home owners association saying he had to take it down. It stated, “Pre-approval is required for nearly all flags. Only military pennants and the U.S. flag are exempt.”

People may argue that it was discrimination against the LGBTQ community. When thinking about it, though, Mr. Pendery needed permission just like anyone else for his flag to be hung. So was it really discrimination?

Although we have the right to freedom of expression, due to the contract a person signs with a home owners association or a department, that may limit what can be displayed outside a person’s home.

In conclusion, a renter or homeowner can put up any flag to their liking unless they live in an HOA where they are limited. So they must follow the rules and understand that they can only put up certain objects that their HOA allows.

Banning on social media has grown more common. Not for breaking the platform’s guidelines, but simply because there’s conflict in what they post. Regardless of your views, this shouldn’t be allowed.

The First Amendment of the Constitution states, “Congress shall make no law ... abridging the freedom of speech, or of the press…” The Founding Fathers wanted everyone to have the right to voice their opinions without government interference. The founders knew the right to expression is important to having a free country.

One student made this statement in class one day: “I think we should take away the First Amendment.” I don’t think he realized he used his First Amendment rights as he said this. Had he known, would he have suggested it be removed from the Constitution? Cancel culture is highly hypocritical. If we can shut out anyone with different beliefs, we subject ourselves to the same. We live in a society where we are granted equal rights and we must keep in mind that just as we have the right to speak our minds, so does everyone else.

Others might argue that social media platforms have every right to ban whoever they like. I agree, but I also think that when that right infringes upon another’s right to free speech, an issue arises. Now we must consider many factors regarding the platform’s policies. As far as I have seen, none of the content that has been banned explicitly conflicted with Constitutional rights, and if this was not so, I would hold the opposite view.

Because I believe that most bans have been issued due to conflicting views, I do not believe this should be allowed. As the people, we have not just the right, but the responsibility to make sure that our rights are protected.