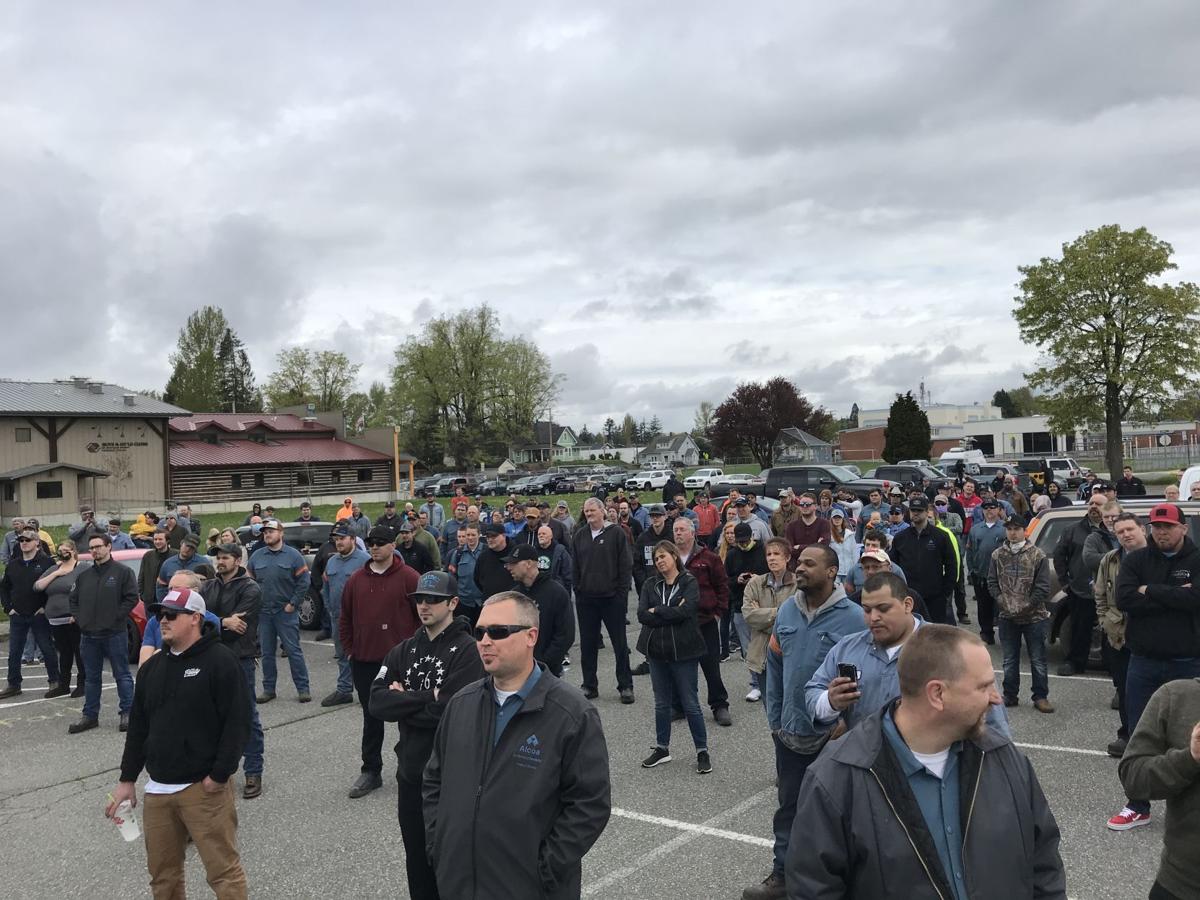 Workers and community members gather in Ferndale for a rally after Alcoa Intalco Works announced the company would be shutting down in July. 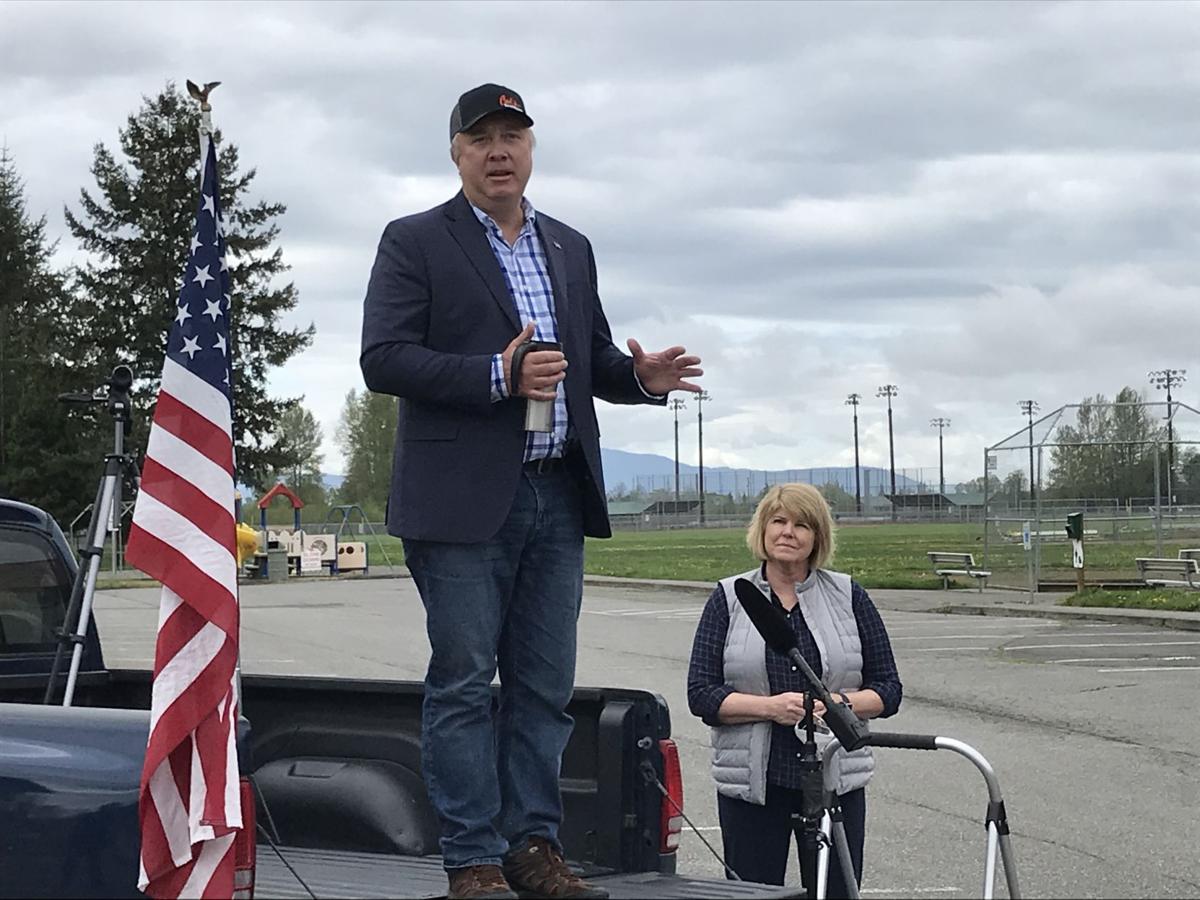 Workers and community members gather in Ferndale for a rally after Alcoa Intalco Works announced the company would be shutting down in July.

FERNDALE — At about 1:15 p.m. Wednesday, Shawn Creasey and about 700 of his fellow workers at Alcoa Intalco Works found out they would be laid off.

Alcoa is shuttering its Intalco smelter by July.

Creasey is in his second stint at Intalco, having taken a voluntary layoff in 2008 to let one of the younger people take over. He said it’s a good job to have and that the leaders can figure something out.

“I’m getting close to retirement, and I just want it to stay running for the younger people,” Creasey said. “It raised my kids and it should raise more people’s kids. It’s still a viable plant.”

Creasey was joined by more than 150 people who gathered near Ferndale’s Pioneer Pavilion Thursday morning for a rally organized by State Sen. Doug Ericksen.

Several speakers addressed the crowd, and the national security risk of relying on foreign aluminum was a prominent topic.

“We cannot understate how important it is to have American jobs building American materials for our national safety and our national security,” Ericksen said in his opening remarks.

Ericksen said bringing American jobs home is important, but keeping American jobs that are already here is important as well. He said only seven aluminum smelters operate in the United States versus 140 in China. Ericksen said getting the issue to a national level is the way forward to keep Intalco open, and he has been in contact with the White House since the announcement in order to get it there.

State Rep. Luanne Van Werven thanked participants for doing their best to make the rally a safe event due to the COVID-19 pandemic, asking participants to maintain social distancing.

Van Werven also emphasized the national security risk of outsourcing aluminum production, and said she is confident that leaders will work hard to keep Intalco open.

“I have confidence that together, we can do everything we can, and we will, to make sure that Intalco stays operational,” she said.

Brian Urban with International Association of Machinists and Aerospace Workers Local Lodge 2379 said for every one job at Intalco, three are created in the community. He said China’s aluminum subsidies give the country an unfair advantage against the United States.

Ericksen said the virus has exposed the further need to keep jobs close to home, and that while the closure is hitting families and jobs hard, it’s also a nationwide issue.

“When you’re in a crisis, like we’re in a crisis now, we need to work together as one unit to be able to save this facility,” Ericksen said. “I’m not going to sugar-coat it and say that it’s a guaranteed deal and that we’re able to get this done. It’s going to take a lot of hard work and it’s going to be very hard to do it because they’ve made the decision, and getting the decision changed is very, very difficult, but we are not going to give up.”

Van Werven said Ferndale Police Chief Kevin Turner told her the event was in violation of Gov. Jan Inslee’s Stay Home, Stay Healthy order, but he would not be shutting it down and that he would observe the event from the back. Van Werven said they didn’t know how many people to expect at the rally.

Ferndale Mayor Greg Hansen said in a Thursday Facebook post that he would not be attending the rally.

“While my heart is with the workers during this difficult time, I will not be attending,” Hansen wrote. “The rally is in violation of the Stay Home, Stay Healthy order and presents a danger of causing another wave of infections in Ferndale. I urge anyone who is considering attending to utilize social distancing as much as possible. I will instead be using the time to reach out to our federal and state elected officials to fight like hell for our Ferndale jobs.”

According to Alcoa, the coming shutdown is due to Intalco’s inability to compete with foreign aluminum; the smelter reportedly lost $24 million in the first quarter of 2020.

In May 2016, Alcoa struck a deal with Bonneville Power Administration to improve electricity pricing from BPA to Intalco. The facility was facing curtailment then, but it was delayed due to the cost savings associated with the Bonneville deal.