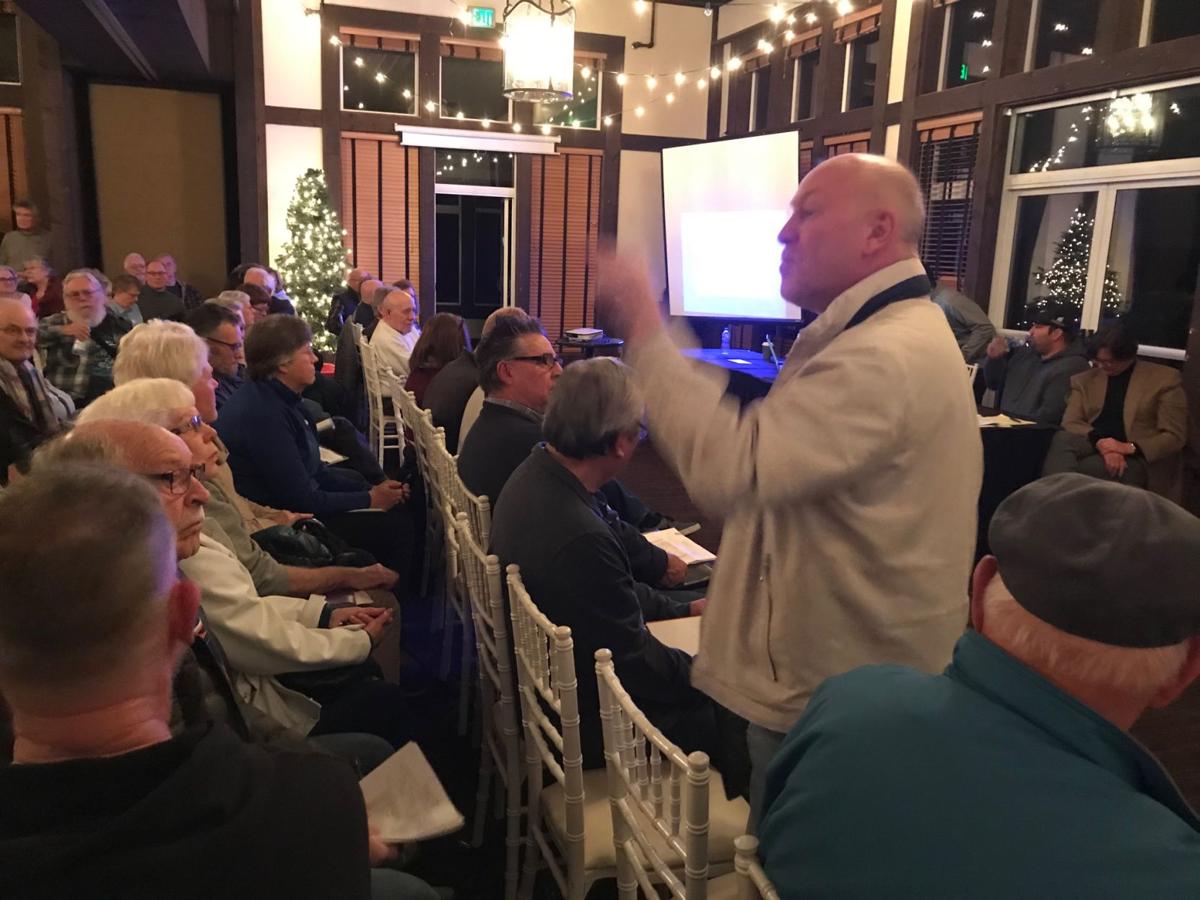 A man rises to speak, turning toward the rest of the audience, at a Dec. 30 meeting over the 158% increase in the monthly joint maintenance fees homeowners must pay to Homestead Farms Golf Club. (Calvin Bratt/Lynden Tribune) 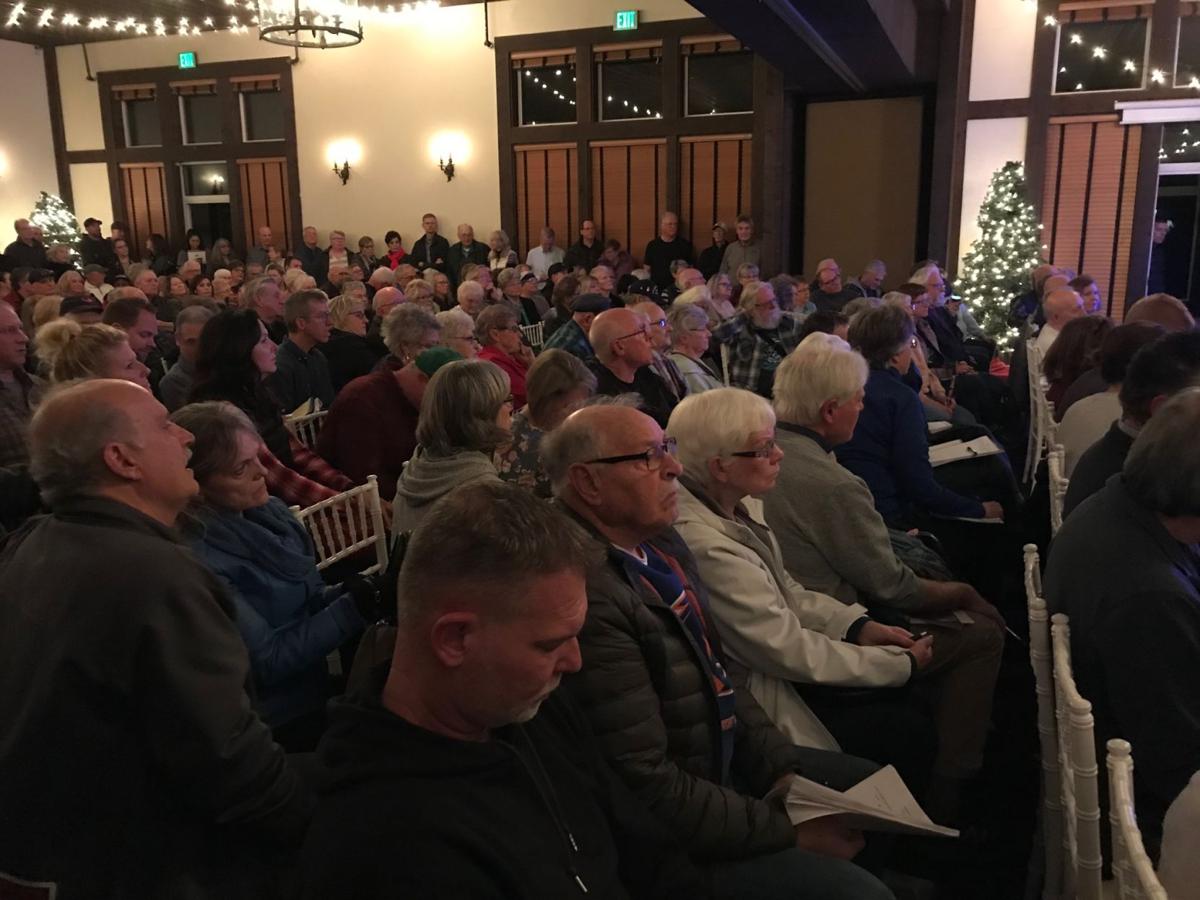 It was an overflow crowd showing up on Dec. 30.

More than 300 attend meeting with managers; a second time is set for next Monday

LYNDEN ­— The two managers of Homestead Farms Golf Club last week faced a roomful of homeowners upset over the 158 percent jump in their monthly “common area” maintenance fees for 2020.

Mick O’Bryan and Josh Williams took turns speaking and answering questions from the crowd of more than 300 seated and standing Dec. 30 in the Steakhouse 9 restaurant gathering room, right in the heart of the Homestead golf-residential development created in the 1990s.

At times the mood was tense, with people interrupting those speaking or directly challenging claims made. The 6 p.m. meeting went almost two hours.

O’Bryan said the purpose was to “keep the community on a good track” and “to continue to move Homestead in a positive direction.”

Specifically and repeatedly, he asked for the homeowners to form an advisory committee to work with MJ Management to develop maintenance priorities, propose changes in the existing system and chart a better way forward.

But some audience members said they felt powerless to really get change, and they questioned how money is being spent and wanted an independent audit of the Homestead Farms books.

O’Bryan and Williams insisted there is nothing to hide about finances and they are willing to take ideas of change to the British Columbia owner of the golf course, Morris Chen, who operates his Lynden property under the name 18 Paradise LLP.

It was agreed that there will a second meeting at 6 p.m. Monday, Jan. 13, again at Steakhouse 9, to continue the discussion, specifically on forming an advisory board, O’Bryan said this week.

In early December, homeowners received notice of an increase in their monthly “joint maintenance fees” from $36 in 2019 to $93 in 2020. That triggered the reaction.

The jump in monthly fees is calculated to represent a 5 percent increase per year from 1992, when the Homestead Master Declaration was created by developer Jim Wynstra. The fee was $25 per month at the start.

At the meeting O’Bryan said dealing with actual safety concerns of lighting, trails and sidewalks is his highest maintainence concern. After that, he’s open to what residents say are priorities.

O’Bryan and also the attorney for Homestead Farms, Philip Buri, emphasized that the legal structure here is not of a homeowners association. “This is and has been a maintenance facility community from the beginning,” O’Bryan said.

The Dec. 4 letter to residents directs people to a full version of the “covenants, conditions, restrictions and reservations for Homestead,” the underlying terms of the development in June 1982, recorded with Whatcom County at https://recording.whatcomcounty.us/Document/DetailsById/2252456.

The language of the 1992 Master Declaration for Homestead states that it was intended that common open space would be maintained by golf course maintenance personnel. That happened well for a number of years until general financial troubles put a squeeze on.

Williams too acknowledged that over the years the maintenance of the common areas for the homeowners has been “mismanaged.”

Although an advisory board is not required in the Homestead set-up, it seems best to form one now, O’Bryan and Williams said.

The pair, who have been in management for Chen only since 2017, said their primary natural interest is the golf course and making it run well.

But they denied that fees on the residents have been used disproportionately for the golf course — it all hangs together, they said.

They said the paper records of finances are available to be looked through at the golf course offices, if anyone wishes to.

As the audience challenged them, the managers projected on a screen a map of the one-mile span between Benson and Bender roads, and itemized what in fact are the Homestead common areas. They include sidewalks, shrubbery, trees, some streets, street lights, parking lots and play areas. It all totals to more than 30 acres.

At greatest summer maintenance, there are eight employees, O’Bryan said. And the Washington State minimum wage rose $1.50 to $13 per hour just on Jan. 1, 2020, noted the letter to residents.

Attorney Buri said that, in his look at the founding documents of the Homestead Planned Residential Development, a “reasonable” increase in fees for maintenance of common open space is allowed.

Those expenses should have been incrementally paid for across  the years, and reserves built up, Buri said. “You’re here because the bill has to be paid, and there’s no sugarcoating that,” he said.

The attorney asserted that there is still good value in Homestead properties, and that a true homeowners association would have legal obligations on it that would likely lead to higher monthly fees than $93.

O’Bryan said that after Wynstra launched the golf and residential community things were maintained to a high standard for many years. That declined somewhat until the financial collapse of 2008-09 brought a “major shift in everything,” O’Bryan said.

Walking into a portable microphone moved about the big room, people said they can’t afford the increase that amounts to $1,116 per year. “You’ve got to be kidding,” one said.

Someone asked if it can be suspended while issues are worked out. No definite answer was given.

The managers said there has been communication with the City of Lynden or Puget Sound Energy (on street lights), but neither is eager to take on new utilities, public works and parks obligations and expenses.

O’Bryan and Williams repeated that they “needed to start somewhere ... working together to start getting something done,” and that was the reason for the letter and this meeing.

They want homeowners to come up with a plan of priorities about how common areas should be maintained. “We’re going to do our best to make it happen,” Williams said.

An anonymous letter received by the Tribune this week, however, calls the fees increase an “atrocity.” It also reads: “It is obvious that this investor (owner Chen) is attempting to charge Homestead residents this 158% monthly fee increase to improve his investments and create further personal wealth for himself.”